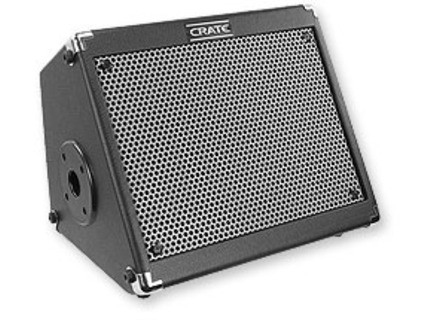 This top of the Crate line of amazing battery-powered, two-way, amplifiers has so many features, you may get bored. But the product deserves a full treatment. Before I say more, remember, this is a battery powered unit. Completely portable. I've used it for a half-dozen 1-hour gigs and haven't recharged it yet. Crate promises about eight hours at moderate volume.

I do a solo guitar act and use it for small gigs, say 40-100 people and its simply marvelous.

Though rated at 50 watts, thanks to its molded polymer enclosure, it weighs about the same 22 lbs. as its little brother TX15's Tolex-covered particle-board box.

The unit includes two input channels. Channel one has an XLR jack for balanced-line mics and a Lo-Z jack. Channel two has a standard 1/4-inch input for guitars. There is also a pair of RCA jacks for CD or other stereo input.

Each input channel includes its own level control, 3-band EQ, and DSP send. The high impedance (guitar) input includes a switch to choose between the 3-band EQ "clean" signal, and a typical "drive" signal with gain and shape controls to produce decent overdriven electric guitar sounds.

The 10-inch woofer and a piezo tweeter put out remarkably clean sound. You'll need to fiddle with the 3-band EQs to compensate for an otherwise thin sound.

The DSP section includes a useful selection of effects including delays, reverb, and chorus. A footswitch jack lets you connect a two-button pedal to switch between guitar channels and to turn DSP effects on and off.

The control knobs (pots) are very lightweight and seem a bit cheap for the cost of the unit. The box and electronics chassis is prone to mechanical buzzing. This is mainly due to the light-weight plastic enclosure. I stuffed some foam tape here and there and solved most of the problems.

Lightweight, yet well made and rugged. As I said above, the control pots seem cheap. But I''ve been banging it around for several weeks and it works like a champ.

Best, most versatile, battery-powered PA/Guitar amp out there.