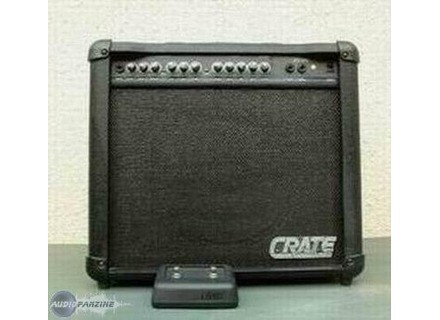 Separate equalization. 1 to clean and saturated for 2 channels

nothing too bad guitar One branch, it lights up, you scratch and the sound arrives.

The clean sound is quite pleasant and excellent. it fulfills its role without problem

The reverb is decent and the action on the knob is accurate.

The first channel gain is top for blues and rock with a gain setting accurate enough.

The second is hard if you push the gain.

Footswicht with 2 buttons, fun rather well

At first it may a floundering, we try, we grope but the liver is its search to find great fun, it is very versatile and adapts to any style

The clean sound is very convincing. The second overdrive channel is a little more complex to solve but when one takes his Son, this is a treat.

I have several pedal that works very well in this amp.

I use it for 13 and it is still there

I have a Fender Super-Sonic 112 60 watt all-tube, a fender GDEC 3 Crate and that gives me a wide range of sounds

the thing that is a deplorable perhaps it is the wiring system of send and return you need a special cable with a stereo jack dimension type and the other two mono jack for loop current effect but despite this little detail it nevertheless a gem (Made in USA).

this little amp I garde.malgré his age he can not stand up encor lot of other amp

Power Bibi's review (This content has been automatically translated from French)

Easy to use? Well, it's an amp koi. At least here, not bored with type SETTING THE Presence, etc ... It's pretty basic but the fact ca.

The manual? Bouble a page with blabla, but no prsentation of rglages types, damage

For sound, since it has that interest to us in the first place:

- The nickel clear: Clear (j'me understand), powerful, no staining in short, a good clean well transistor which saturates it!
- The saturated 1: It gives a good little crunch when you're in the first third of the knob, and small small one approaches the big rock. For against (and it is valid for the 2nd is not saturated transistor requires trs warm ...)
- The saturated 2: Ben the ca change a lot since we have a small SETTING THE shape (to dig the medium) which gives sound of Marilyn Manson and Co. Default key: we lose in carrment DEFINITIONS ... long live koi boiled sound.

Basically: The clear top, its crunch not bad, its "mega saturquot; a shit ... (but got the adpend).

I use it now for 6 years and prs I am quite happy for the price (approx. 400)
Finally, it will give his best even for someone who:
- Play in groups and needs power
- Not a lot of gold coins
- Search for sounds real clean and not too typbr /> - A real good one for distortion pedals!
Did you find this review helpful?yesno
»

No manual. Clear-air configuration
For saturated channels is a bit more complicated at first. It fumbles around with the gains of two channels, but you end up finding what we seek.
For the price, it gets heavy.

To clean is clean ....
The reverb is interesting but do not push too much treble.
The clean sound can be very good if we utlise a good scratch.
With a Jazzmaster is bluffant.Si I take my Flyin V, is happiness.
In full, it's a bit more complicated: the first channel and crunch but just a little dirty with the gain pushed beyond 5.
The second channel sends a heavier distortion, covered that fully respects the sustain of the guitar (if it a. ..).
The HP is quite straightforward and is placing himself in front gives a direct collateral damage: the feedback. It is therefore advantageous to carry a cord longer than 3 meters to avoid this disadvantage.
It's not perfect but nothing is really bad. Again, it's about value for money: at this stage is good.

I use it for 2 years, alternating with a series peavey TransTube an attack 80 of Hugues & Kettner All Tube and a carvin.
It comes second after the choice of course but carvin size shorts the first 2 cities.
I play with a drummer enough guts and a keyboard that has a tendency to turn up the volume.
Volume 5, I cover both. is the main reason for this choice: the power is there.
Associated with a Digitech RP 355, I have access to all the sounds I want.
Note swicht a box with 2 buttons to switch to mix the 4 effects:
Clean, SAT 1 and 2 and reverb.
In summary: Power, good sound and reliability of the brand.
In time, competitors would be the fender 212, 1000 and performing rock pro.
For my part, it is better.
I would buy the same price.
Did you find this review helpful?yesno
»

branch, we light and go.
No need to book.
The clean sound is excellent. No fuss, as already mentioned by other users: It's the sound of live guitar amp output.
The reverb is very good and action on the volume pot is accurate.
The first gain channel is awesome for blues and rock with a gain setting accurate enough.
The second is hard if you push the gain.
Footswicht with 2 buttons, one bursts serious.

With experience and refining its settings so I can adapt to all styles with this amp without using the pedal.
The clean is very persuasive. The second channel is a bit more saturated hot deal but when you hold your Son, it is a treat.
I have a pedal Vamp Berhinger which runs very well in this amp.

I use it repeats every Wednesday and nobody can cover me if I put the sauce.
I have a Fender FM 212 bought used and the crate is more accurate and powerful.
The amp weighs 17 kg and is not monstrous side arms. It is a little less heavy than my Fender and has a very good reputation for reliability (Made in USA).
This is the best transistor amp I had and I garde.Il is obviously worse than an all-tube but it stands up to many others in all areas.
The guitarist I play with on Wednesday utlise a Vox Valvetronix 60-watts.Si exception that Vox has a model, the crate is completely road in sound and ridiculed in power.
Its strong point is the quality / price / power.
Did you find this review helpful?yesno
»