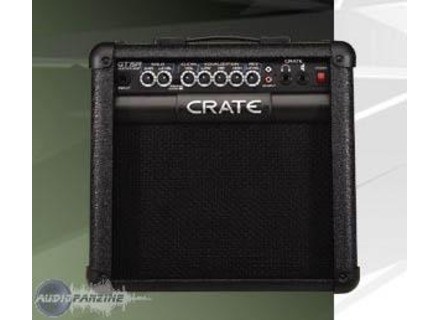 Crate GT15R
4
The Crate GT15R is a small guitar combination amplifier designed for use in a practice setting.  Like the name states, the amp has 15 watts of power and also has some built in distortion and reverb.  The amp is solid state based and has 1/4" connections in the front for your instrument input, as well as for a headphone output and external speaker output.  The amp also has RCA connections for plugging a CD player into it.

Using the Crate GT15R shouldn't present any problems to anyone, even if you are new with guitar amps.  The configuration of the amp is user friendly and easy enough to follow that you shouldn't need the assistance of the manual.  The amp has two channels - a 'solo' channel, which is like lead, and a clean channel, and they can be switched between with the button in the middle of them.  The solo channel has parameters for gain and level, while the clean channel only has a parameter for volume.  The amp also has a three band equalizer and a reverb knob.

The sound of the Crate GT15R is definitely nothing that will blow you away, but it will get the job done in a small practice setting.  This isn't the type of amp that you'd want to record or play shows with, as I think it should be treated strictly as a practice amp.  While it can get to a decent volume for such a small amp, it isn't loud enough to play a show with.  I've used the amp with a Mexican Fender Telecaster only for playing around and not recording or anything like that.  The built in distortion isn't great, but it is nice to have, while the reverb is a bit higher quality.  The clean sound is probably the amps best setting, as it is crisp and it is easy to hear everything that you're playing for sure.

While I certainly wasn't expecting too much from this amp, I found the Crate GT15R to have a pretty good sound for a small practice amp of this type.  The amp shouldn't be used for anything other than practicing, but if you're looking for a cheap amp to practice at home with, the GT15R will do the job.  The effects aren't great, but what can you expect from a cheap, small, amp like this one.  I'd recommend checking out the Crate GT15R if you want a small practice amp, but definitely also check out the Orange 15R as it is a superior practice amp for only a bit more money...

worC's review (This content has been automatically translated from French)

Configuration: you can not simple, there's just turn the knobs and sailing.
Good sound: it dpend sound that we want but the config as simplistic, the rglages are carefree.
Manual: No manual provided (not required)

Style of music: my game as versatile enough, I must admit that all (or almost) goes without a hitch, except for palm mute with a little too heavy disto o cne vibrates ...
Equipment: I play with a Start of rplique and ZOOM 606 (the shame ...)
Types of sounds: one is better to have pedals that simulates an amp for clean sounds lamps because they are relatively cold. This amp is plutt east rock (my opinion), the distortion goes much better.
Prfres sound: since I do not play nearly clean, I only have the distorted sounds, but is better to invest in an overdrive pedals because of lack SERIES real punch, basically the amp is not that make noise.

How long: I use this amp for about a year
Particularity <ul> I love the most: having an EQ is hand because I have not been able to offer me one worthy of the name
that I like least: it is undoubtedly the coldness of the overdrive, they should really do something. </ul>
Essay of other models: I tried a lot of other models but the default budget making me, I turned to this amp (besides I have russi rduc a ')
Report qualitprix: plutt suitable for that price, though a bit expensive but I had no other choice ...
Repeat this choice: I do not think this choice again as a small amp (not so powerful) and the distortion really makes it default, I think I would go somewhere else ... plutt
Did you find this review helpful?yesno
»