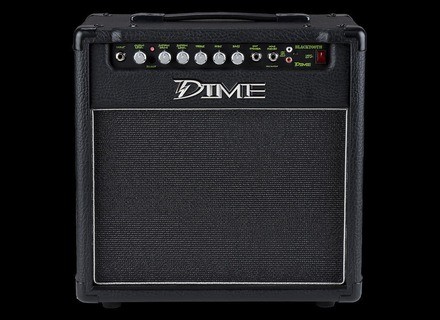 ricoute's review (This content has been automatically translated from French)" Very typical .... and not fully usable!"

manual in english, not bringing much to those who are accustomed to guitar amps

this is where everything is a little particular

The sound is a fairly typical big sound grain (we suspected vis-à-vis the reference to ...)

Ultimately, a big ... bump in the lower medium artificially enlarging its scope and giving the sound that comes out of this little jig!

I'm going to be honest, more precisely detail my impressions below

It sounds a little rumbling in the lower overall a bit like ... Hot rod.

THE clean sound is correct or good but not too detailed

The sound is very compressed drive gain is extreme and it is a good part of his philosophy!

The first problem is that the level (drive) including the level, do not cut below a certain level of 3/4mm e nStart race, so unless you want to play hyper saturated low volume, n is not possible!

No, the big concern ... is I do not know if it is the same amp or even 2 Hp (Eminence yet, but it sounds very very "boxy" (worse than ac3 / 4 Vox says it all!), with resonance peaks very annoying and not homogeneous cohérantes ie not constant and that is the worst ... on such an agreement that will resonate sometimes a lower position in the handle and not resonate in a position higher therefore more serious ...

Therefore not very usable for me at home in any case, it seems that the internal hp 10 "good workmanship seems he panics a little mid-race, and it is perhaps not quite innocent, it was designed with the ability to connect an external speaker plus sized enclosure type 4 * 12

Which is a bit contradictory is its relative low power (this does not mean it is not sound) only 20w .... limiting its use .... and oddly group in the event connected a large external speaker type 4 * 12 is associated with it ... rather than a power amp transistor (sf except the tube) also! So what to target?

I have used a few days

I have tried other more conventional amplifiers Behringer AC108 Your ac3 / 4 orange crush / fender without ever having found a satisfying sound .... (apart from my old (maraton RG20)

The feature that made me choose was that it was more oriented high gain, less clean sound nothing wrong but is not particularly detailed but fairly warm is a bit sense generally lde this amp! !

R / p / q is pretty good, good construction and brand hp, you will understand that it is in its use bcp I'm more reserved!
For the record it was (version Us?

Also a version without the double volume seems he!

No, I do not remake this choice based on his side too singular, not usable home office in "drive" in any case, probably not enough sized to the scene, this is an atypical but not devoid of personality may agree to use intermediate (mais. .. which one?) some anyway!