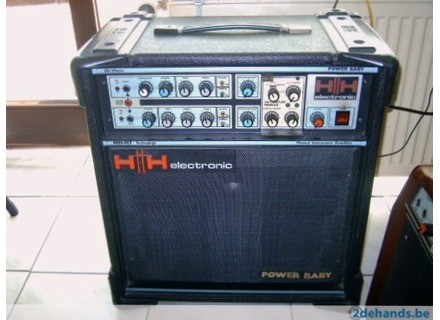 HH Power Baby
5
So this amp is really special already weighs 29kilos
He has a look of interstellar cruiser came from the imagination of scientists from the 70 'only here xD.
It's a transistor amp Mosfet type field effect transistor (mainly used in HI-FI) known to have its closest of any lamp, thus filtering the odd harmonics (hard, who are generally unpleasant No ears) and favoring the even harmonics (sweet, pleasant totally what a tube amp). mosfet Randall uses for its G3 series as well as Marshall and a lot of manufacturers like Ashdown bass amp.

Mdr then there's pure retromodernisme effect module or it is marked
"The 21st century unites effect" which includes flanger with 2 LEDs that flash alternately to give the speed of effect, a kind of echo and delay is very court.Quant activates the unit there is a sound of space-based laser unscheduled xD.Je am not very effective but the flanger is pretty good.

It seems that mine dates from 1983, Made in UK, works perfectly except for a zzzzz light (probably transformer) which disappears if one disconnects the internal speaker, he did not notice it as for a lamp to crack a halogène.Certains knobs peu.Il weighs a donkey is lighter Mort.Quand ago badge flashing lights HH: p.

So I bought it for this look atypical, it is rare, mosfet, I needed a good clean to distortion (MXR M151). I have an ibanez s320 bin and the clean is very 'm the best I've heard transistor with a small special staining (which reminds me of a warm warm ^ ^) the best channel for moi.le crunch overdrive is a bit dull but sympa.Le mixture of 2 gives a range its fairly broad with its generally very low medium.Il medium has a stockpile of awesome power 150w Hp ^ ^ The internal quality seems to lack of clean although a little low should not hesitate to push for the Palm MXR double shot mute.Avec is a killer for powerful sound Slayer, Oi polloi, Rudimentary Peni,, Fuzz aussi.et I tried to connect on a 4x12 Marshall sound is excellent + + dynamic better defined for the distorted sound in fact.

3months since I use is great. I was often break above questions like "It is from the future?" Or "It is light?" ^ ^
I like the sound and the originality of this Power baby, but a little less weight xD.
The price for which I got is great if it continues like this he can reach