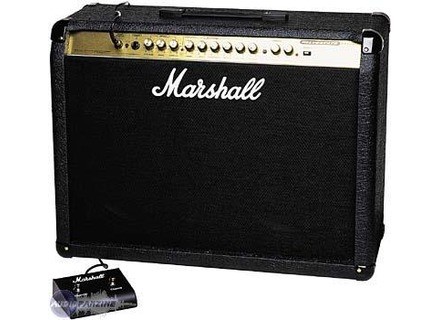 I have used this amp now for gigging/home/recording for five years now, and it has not let me down once. The amp was released under Marshall's 'Valvestate II' techlonology range. Although it can not by any means emulate tube amp warmth and feeling in a side-to-side comparison, it has been the most reliable gigging amp I have used in the last 5 years. Although I seldom run its built-in distorted channel (I employ a rack of several pre-amps for my desired sound), the Marshall Valvestate clean channel is among the best I have encountered in a very long time. and use only it along with a noise-gate for recordings.

The distortion / channel with the Marshall Valvestate V230 is no longer competitive by todays standards of modeling amps (ie: Line 6) and pedals (ie: Digitech). However, the built in Chorus and Reverb are top-notch quality. I have forgone my chorus and reverb pedals (of brands I have trusted for years) for those built into my Marshall VS230 (Boss CH-1 Super Chorus / Boss RV-5 Digital Reverb).

Construction is top quality. What else can you expect from Marshall Amplification? I do not know the spesifics of the woods and plastics used in construction, but this combo has held its own. There are the expected nicks and scratches from in/out bus use, and on-stage banter. But the internals of the VS work as new. The italicised logo has only had to be glued back into position once after heavy touring. (We are a large band - the average 500+ gig/night will not encounter these problems).

The first few years that I owned my VS230 were used for recording and home/studio practice. At the time I utilized a Boogie Subway-Rocket for gigging until i descoverd that the tone you obtain from such an amp is not projected to the audience via house speakers / PA. In the last year or so though, I have re-discovered the valvestate tone and relyability.

If you are able to get your hands on a VS230, snap it up immediately. There may be some corners of the world where this amp may still be purchased brand new, but I highly doubt it.

Last week I (my band and myself) supported US punk rockers Strung Out in a 1000+ capacity with a full setup switch between acts. My VS230 mic'd to the house PA delieverd on que.

Marshall VS230R
4
I got this amp in the Classifieds section because I had just gotten a new guitar and I didn't want to pay too much but wanted quality too. I bought it at a bargain price of $230 when it can easily go for $400.

What I like most about this amp is it has a foot switch for distortion and chorus. This is also a good price for the sound it puts out. It has two speakers of 65 watts each and the enitre unit is about 36" x 20"x 10". it also has a jack so you can plug in headphones. There is also a DI Output so you can hook it up to recording or PA equipment.

The thing I dont like about it is that there isn't an input jack for a cd or tape player so you can listen better to a song you might be trying to play.

It is sturdily built and its sound output is great.

All in all this is a great amplifier that I would definately have second thoughts about selling. It has plenty of output jacks and is definately worth the price.

JohnnyG's review (This content has been automatically translated from French)

The setup is fairly simple, it happens quite quickly to a result.

The manual is useless

Some regrets:
No regulation of medium on the clean channel
No effects loop

The chorus is very effective and really gives the magnitude of the sound.
Two settings: as a traditional chorus or so in boost for solos:
speed and then the kids onregle depth depending on the volume that you want to solo

So I play / played it with an Ibanez 170DX and Lag Arkane AM 100.
The light is surprising: after you change the guitar at all, with electric rock sound was crystalline enough (corect them are quite effective) eten plugging a guitar jazz jazzy sound was super credible (well not saturate it slightly like a lamp but it will do very well already.

I like the channel saturation but tends to remove the personality of the guitar. That said there is no lack of dynamics and when we play the slight decrease distortion.

I used it until I loose (well I'm not quite sure ... maybe it means there to save him). His input jack is almost dead and he changed the channel on your own ...

What I like is the chorus which allows passage rhythm / solo efficace.Les sounds that are correct then my time ...

What I regret is the lack of effects loop (maybe see how a fiddle and it would be above top) of its medium setting of clear and no master volume
For value for money is a gift that I was therefore virtually unbeatable.

Marshall VS230R manuals and other files