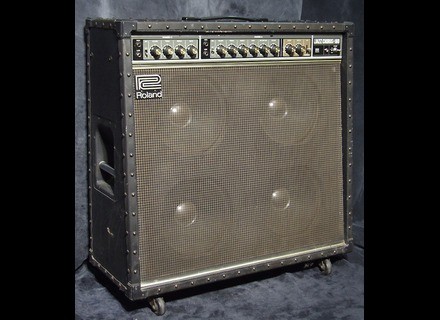 Simply one of the best clean tone in the world. Many artist have used the Roland JC amps for their recorded clean tone and their live tone as well. The 160 is much like the 120 with a different set of speakers and a larger cabinet. You get the same features and tone but you have four 10 inch speaker instead of two 12 inch and the wattage is bumped up to 160 instead of 120.

This amp has seen a number of uses and major users such as Metallica and many others. This amp has a clean tone that is perfect for recording as well as running a pedals in front of. For me there is only one reason to own this amp...and that is to use it on a recording for clean tone. The chorus is very lush and smooth! It sounds great with just about any guitar you throw at it. If you have listened to any James Hetfield then you have heard this amp.

I would recommend this amp to anyone who needs the best clean tones in the world. I am partial to solid state cleans as I feel that they have a sparkle that tubes cannot match. Distortion is a whole different ball game but the cleans will get you the best chimey sparkle you have ever heard.

You can only find these amps on the used market at this point. They are highly rare as I think they were only sold in Japan. I have seen them for around $500 or so. A little bit on the high side for a solid state amps. If you really want to gig with this amp then it is a good purchase, but if you just want to use it for recording a particularly the clean then save several hundred dollars and get a Cube amp from Roland that has the JC Clean. But this amp is so classic anyway that it is a must own!

wx2buzz's review (This content has been automatically translated from French)" Amp Top3! A must!"

Roland Jazz Chorus JC-160 (Vintage)
5
The features are widely described in previous reviews as well as being easily found in the manual rubrque Media AF.
However, allow me to correct my colleagues clarifying the JC-160 power 60watts (X2) and non 80Watts (x2)! See the manual if you do not believe me.
It is a common belief that the "160" means 80 +80 watts since the JC120 is 60 +60 watts error.
The JC-160 amp is exactly the same as the JC120, this is the format that changes combo (4X10 "instead of 2x12")
In the most negative points, the two channels 60watts can show their entrenchment view be sufficient in situations of large concert. Rest assured, the amp is plenty powerful in situations of repeated and small / medium concert.

Classic amp configuration of instruments.
Everything is there, it is intuitive, simple and efficient. The knobs are large, easy to handle, everything is well signposted and the rear connector is provided, which gives us some versatility.
It is easy to get a sound Exellent. This is not an amp "headlock".
One can regret that the knobs "Speed" and "Depth" only affects the Vibrato. Chorus is unfortunately fixed.
Side construction is sturdy, it's heavy and it inspires confidence.
It is certain that the JC-160 is heavier and bulkier than its little brother, but Roland had the bright idea to fill the worries of transport factory installed plus two sturdy handles inlaid wheels on the side of the amp, Simply brilliant!
He is often compared to tube amps (for a clear sound) and I have to remember that the JC-160 has a lower fragility and a much lower than these interviews cost. Unlike others, Roland JC amp are aging very well.

If you conaissez series Roland JC, not if it is only by reputation, I will not teach you anything by telling you that this is THE clear sound par excellence.
This is a formidable amp is extremely versatile. I'm keyboardist and I regularly branch Rhodes MK.II / Nord Stage / Yamaha CP70 and always synth with a stunning result.
Obviously, I plug my guitar on occasion with the same delight (MIJ Stratocaster and Peavey T-60)
The JC-160 is one of the best platforms to connect your armada pedal, in any case you will find satisfaction. Whether for guitar or keyboards.
The switch from bright is really a powerful weapon when it comes to get a clear crystal clear sound.
This amp is a very mat which you can plug almost anything.
However, among the negatives there are relatively quite far away. this is not so bad but it can certainly annoy when not playing. For its part, the equalizer full well his office but is far from daunting.
Spring Reverb Z (Whatever made by pretty woman in terms atmofpheric dedicated power!) Is good but not great. The reverb effect is quite dark and "opaque".
As the reputation of the distortion knob is indeed deserved, it is difficult to use.
Let's be frank, the Roland Jazz Chorus are "Clean Machine" and not amps dedicated to saturation, consider it as such. To get a good saturation, plug your favorite pedal.
I will conclude with the second point that made them famous: The Chorus!
It is just fantastic. He brings an extent that even the best pedals are struggling to produce. I have the Boss CE-1 and CE-2 chorus and I prefer the JC-160 CE-1, say it! I do not rest on much, but I think the JC-160 probably offers richer than the JC120 by its 4 HP and their attribution of both channels "X" chorus. Perhaps this is a matter of dispersion.
Vibrato is also very tasty. Vintage wish!

I use it for more than two years. I had the chance to compare countless times and use equipment with an impressive number and JC-160 Jazz Chorus always Surpend!
JC-160 shares the top of the podium clean amps with Fender Twin Reverb Blackface (Which I also have).
In fact, the JC-160 Jazz Chorus amp is really what I need concidere definitely put in his Top 3. By far the best amplifier transistor and certainly among the most legendary amps of this world.
Even surpasses its chorus (for me) legend Boss CE-1 and CE-2.
A formidable amp for guitar, but even more for the EP's keyboards.
I would do this choice without hesitation.

fred_etc's review (This content has been automatically translated from French)

Roland Jazz Chorus JC-160 (Vintage)
5
Transistor amplifier 2 * 80W
4 HP 10 "which face slightly upward
2 channels with a no effect (ideal for connecting a microphone)
SETTINGS acute, medium, severe
effects: reverb + tremolo or chorus
A little heavy, but its small wheels allow easy transport, which says more transistors said impact resistance foolproof
I do not think it is disregarded, all the studios have, and it was used in an incredible amount of records

Setup could not be more simple
The sound is fantastic
You can play hard on it, but nothing to do with a tube amp.
In concert need a PA ca
There is a distortion built in, but I mention it, it is atrocious.
It is the warm and clear with a hint of chorus that makes you fly a 10 000 m above sea level.
In short it is a fantastic gem, I had the opportunity to buy a second, only the lack of space prevented me, but I am very sorry. I could buy 10 if I had the place

It is ideally suited to my style (I play a 80% in clean or slightly distorted)
For the Jazz / Blues is simply a reference amp
Only when the breath activates the tremolo or chorus is a bit high. But we are not facing a 2008 amp!

I have at least 10 years
Its particularity is to deliver a unique sound, clear, warm, bewitching.
I bought 3000 F, it gives
As I said I would do this choice 100 times if necessary.
I tried versions 120 and 60, they are very good, but the 160 is something else again.