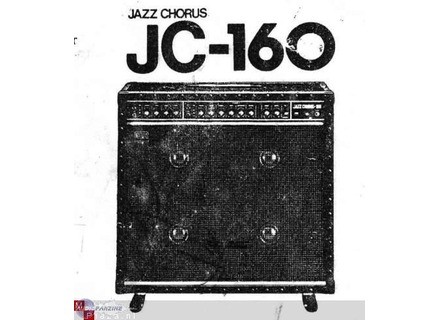 Everything, even without my Boss GT-6, I found the cleanest tone possible, and the true stereo chorus is rich and warm. Every note, and chord sings. I play it thru my Fender US Strat modified with the David Gilmour EMG SA active pickups.

Nothing, except that it is a bit too heavy in the case I want to take it here and there to show friends, and make them envy.

Very solid, built like a tank. I believe mine is the older one than the ones they sell nowadays..........SOMEONE HELP ME OUT HERE: I believe mine is very old, the power switch is a silver switch, and the effects power (Vibrato, off, and chorus), are not knobs, but another silver switch, and the speakers have the silver tips. I will send a pic upon request if you can estimate the year it was made....j9928@cox.net

Legendary sound. True chorus. You will not regret buying this wonderful amp.

The amp still had it's original cover and was in terrific shape. I called Roland US to get info from the serial number and found it was made in 1984 in Japan, before they changed it. Anyone will tell you what a great clean sound it has, but I say it is also one of the loudest/cleanest amps out there still today.

The distortion, of course, but I use the Boss Metal Zone, problem solved!

One of the most solid amps built! It's a tank! A bit heavy too though...

I would not hesitate to replace this amp with another if it ever fell off a building or something (the only way I believe you can kill one of these).

Roland Jazz Chorus JC-160
5
Price Paid: 500-600 (CAD) used Vancouver
I was looking for a Richy Rich clean sound - full and sparkling , and the fact that I could plug in my Roland D10 Keyboard into the amp was a big plus!

I kinda think of this amp as a giant effect box, cause with the chorus off it can sound kind of sterile. But the chorus is a big winner!I have a Roland D10 keyboard and I can plug it into the front of the amp like a guitar or bypass the amp and go direct to the line in inputs. Terrific feature - saves buying a keyboard amp!There is a kinda joke about that the jc120 makes all guitars sound the same. When I was playing inexpensive guitars - squires and the like - this seemed to be true. The Roland acted like the Equalizer, evening up the sonic play ground. ha ha!My gibson nighthawk sounds glorious with the middle pickup position - shining, sparkling, incredible with the chorus engaged!.Yes this is one trebly amp, but I always play through the low input with the bright switch off. With treble at 3-5 the sound is bright without being harsh. it is a refined sound, great for blues/jazz/spatial textures. Yum yum!

With the chorus off it can sound kind of sterile, which is why I think of it as a giant effect box with speakers. Ha ha! There is no way to get rid of the ever present hiss. However, it doesn't bother me as at only moderate volume, I can barely hear it

I would buy another jc120 if I lost this one. I was playing a 4x10 fender hod rod deville and a vox ac15 previously - The roland gives a much bigger sound than the vox, and a smoother sound than the 4x10 hod rod, though I am purchasing a 1x12 fender hod rod - called the deluxe now - cause for certain bluesy stuff the solid state roland lacks transparent spunk

Roland Jazz Chorus JC-160
4
This is the best clean tone in the world. Many artist have used the Roland JC amps for their recorded clean tone and their live tone as well. The 160 is much like the 120 with a different set of speakers and a larger cabinet. You get the same features and tone but you have four 10 inch speaker instead of two 12 inch and the wattage is bumped up to 160 instead of 120.


The amp is extremely easy to use and an idiot an figure out how to get this thing a decent tone. The amp takes pedals very well, and if you need to bust it out of your house then be prepare to hear some loud tone. Rated at 160 watts of solid state power this thing is going to be insanely loud. Probably why they didn't make them that long because who needs more than 120 watts right?

You can only find these amps on the used market at this point. They are highly rare as I think they were only sold in Japan. I have seen them for around $500 or so. A little bit on the high side for a solid state amps. If you really want to gig with this amp then it is a good purchase, but if you just want to use it for recording a particularly the clean then save several hundred dollars and get a Cube amp from Roland that has the JC Clean. But this amp is so classic anyway that it is a must own!
Did you find this review helpful?yesno
»
Read the 5 user reviews on the Roland Jazz Chorus JC-160 »