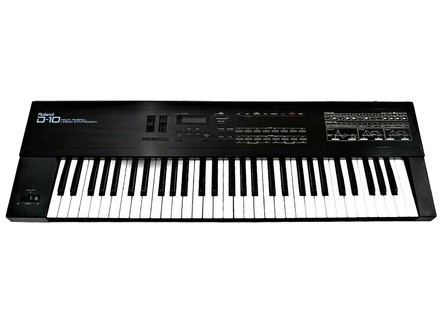 Roland D-10
3
The Roland D-10 is a synth that you can purchase in the keyboard form or in the rack module form. Either way you will get a great set of sounds to use, but if you purchase the rack module you will run into some editing options that are just too difficult to overlook. So the D-10 keyboard is the best way to go because it just gives you a little more control and makes it easy to achieve the sound you want to get out of it. There are only 8 effects on this synth, though I do wish there would be a lot more but this are still pretty good. This is an older keyboard, and most older boards do not come with a bunch of different drum kits like newer synths have. This keyboard only comes with 1 drum kit and it has a good amount of sound in it but they are not very good.

This 61 note keyboard is velocity sensitive and MIDI capable. When it comes to the sounds, they are great if you put in the work to make them great. Right out of the box you get some simple and dry sounding instruments. You will need to put some effects on them to give them some life and the bad part is that there are only 8 effects to choose from so you will feel a little limited.

These keyboards are cheap, but they are not worth the buy unless you are willing to put some work in on them.

If you are a preset kind of musician and don’t want to do a bunch of editing and tweaking then stay away from this board because that is all you will be doing and you will be wasting your money. You do not have to be a sound designer to work with this board, you will just have to be willing to add effects and teak every single sound to make it usable.

ZeeByeZon's review (This content has been automatically translated from French)

Roland D-10
3
Synth 5 octaves, all that is more standard in terms of collection outdoor.
Emagic SoundDiver used with it better than the buttons and the screen on the front.
Product details ...

Configuration is done using menus on the front with a small notch of 2 lines. Trs is not enjoyable ...
Comfort made from the edition of the sounds is pretty simple once you have assimilated the principle of sound synthse. I was 13 when I got it, I was not a problem of pos (APRS have read the manual well sr).
The manual (in two volumes, a simple and complete) trs is really good.

Ah yes ba, forcment is not because there is labeled piano (hihi) or guitar (hahahaaa) ...
Eyes closed, it's not always easy to reconnatre instrument

on the other hand, if you want to DLIR and rap or techno or even the festive song with electronic sounds original, no probme! 4 indpendants oscillators per voice (called "partials" on the device), a system that ring modulation (AM modulation), filter rsons, an LFO and three envelopes per oscillator, there's all it takes.
The sound is unique. The filter has a sound all its own, a sound like an easy tone of voice, it is curious ...

What may be the use of this device today?
<ul> Keyboard matre
Sound module, provided they have other, because it alone is too typbr /> Synth on scne for electro example, or associated with a Leslie for Cheap organ </ul>
In fact it is still usable, well, I'll show

Marc66s's review (This content has been automatically translated from French)

As a novice the era I was able to fend for himself. So no complaints.

Cot sounds, and although I have a tonn more by listening to what I managed to get out.

How many of us beginners on this machine or in the same range ....
If I had not been a novice in 1989, acquisition date, I probably would not cost the advice of a "vendor store", my advice to the D-10 and a squenceur Alesis MMT 8 (which crashed all the time for that matter) rather than a D-20. Of course, the notes must be placed in the context of the time. At this price and with these the possibility, there were not many people. And although it is synth Exceeds a technological point of view, although I have sold .... well I'm nostalgic what!
Remain good goal. Ca acoustic sound level is a joke compared M1. But he had a sound him I quite agree with other opinions. Above all, it could be programmed. Always compare an M1 or a consort, with the pcm, the analog waves, resonant filters, the algorythnes, well you could put his two cents. What I'm getting at is that a lot of manufacturers could take a little example. I had subsequently more expensive machines, with supposedly more possibilities ... and yet I could not help them to think programa D-10: for me there 'was no possibility.

musicoli's review (This content has been automatically translated from French)

Roland D-10
4
5 octave keyboard with pitch + modulator.
2 output jacks (left and right) + 1 headphone output.
Out / MIDI In, Out, Through.
Sustain pedal input
128 basic sounds (Bank A and B) Internal + 64 sounds like "ingredients" with which you make patches (64 x 2 banks) or by merging two basic sounds (Dual) or split the keyboard into two.
Sounds are obviously edited (otherwise it would not be a synth) so little practice elsewhere (system menu and sub menu ... Take your time!), Unless you use an editor Pc! !
The basic sounds Bhen is kind pouet pouet klingkling ... (I mean the basic sounds, no patches). I agree with other opinions on this synth, the basic sounds are not realistic and frankly not aged (there is the same on toys for kids right now) ... There's cons by way to make fun patches!
The polyphony on this keyboard is 32 notes (which is not bad anyway).

The setup is simple (y'avait nothing complicated at the time), however, better to have full manual (even for a self-taught) to benefit 100% of small subtleties of the beast.
Editing ... Bhen is pure digital era, no knobs -> no real-time control (except TFW via Midi on pc?. Publishing is fastudieuse! It features 4 oscillators using synthetic LA (Linear Arithmetic).
The internal PCM samples are poor, in addition to their length decreases or grows according to the notes (a little annoying for the agreements).
The manual is clear and everything is nicely explained and downloadable on the website of Roland in French.

To the point of view patches, there's way to make things nice, very interesting.
The synth is not really made for electro cepandant it sound all its own, unique (sounds a little power). I have created patches that is very similar to the layers used in the "Big Blue" by Serra, but also an organ sound with the "what I'd say" Charles R. (Bhen yep) and I'm sure to be far from having been around this synth.
bass sounds to the "New Order" in 80's.
At noon, it tends to drop a bit when we are bombarded with information, but it never crashed.
Which is a shame is that we do not use patches Paut in multitimbral mode.
Of course, one can use multiple sounds on one channel, but that does not give the same effect as patches (no actual fusion of sound).
As against the keyboard is splitable at Noon (lower and upper) of 9 Parties.
You can use the drum kit as drum machine (programmable, but a little boring to program!) And no way to edit the sounds of the drum kit.
effects (delay and reverb) are not the most beautiful I've ever heard.
I could compare it to the effects it had on the play station one (roughly speaking, it sounds digital Aie Aie Aie late 80's).

I use it for a year, I bought it for 100 euros on an auction site world famous ...
What I like least are the menus and the fact of not being able to tweak the sounds in real time like an analog or analog modeling and also the edition that goes on.
What I like most, the possibility and also the sound quality anyway (provided you do not use the patch of origin). Yep Because the patches are like the original basic sounds "old and ugly" for most.
There's these things hetniques haha, pfffff ...
on the other hand sounds a bit like film music to John Carpenter.
You can buy cheap for the expansion card d10 PN 01 or 02, 03 etc ... This will help you draw some Ingredients interesting.
Before buying it, I used analog synthesizers (juno jupiter 8 and 106, old and new style arranger korg casio and Roland groove box).
Value for money, very interesting 100 euros for a synth!
I would do this choice, of course for the price, because finding a synth cheaper than that ... does not exist.
What is certain is that for that price, I will not let go!

Did you find this review helpful?yesno
»
Read the 6 user reviews on the Roland D-10 »

Listen to the 8 audio files about Roland D-10 »

Roland D-10 manuals and other files