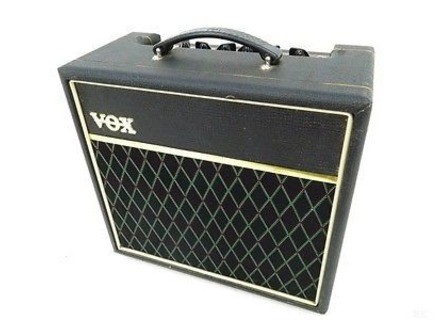 Vox Pathfinder 15
2
Today you can get modeler amps for the same price with a ton more features.Vox has been getting more and more into the small amp market. It seems the highest they really go is the Ac30. Even though they have had and still do have a 50 and 100 amps they run the Ac30 as their flagship amp.

Now they have been trying every variation of possible small and combo amps that you can think of.They really stepped into the modeler territory and this amp even though is not a modeler....well it should be. Honestly this amp is a bug head scratcher for me. It is one channel and the thing is a solid sate amp.

Other than reverb this amp is the same as the Vox 15R. There are many amp in this price range and even cheaper that have multiple channels and multiple effects. The sound you get from this amp is very good but it is just so limiting that it makes it very disappointing for me.

I like this amp with a Les Paul. I ave heard it wit other guitar but my personal preference is with a Gibson Les Paul.I have to say that the amp does sound pretty decent, but I feel for the price it is limiting in so many ways. Well the more you crank the gain to more is will have that familiar Vox type gain structure.

At new these amps come in at around $120. Not bad but not great either. I would go with the other amps I recommended in this price range. I wouldn't recommend this amp to anyone. There are plenty of other solid state amps in the same price range that can do much more than this thing can. I like the Roland Cube and the Peavey viper much more than this thing. More sound s and more options.

vivalazik's review (This content has been automatically translated from French)

Vox Pathfinder 15
5
Transistor amp, 15 watt, vox hp 8 ", with line out, phone out, it can connect a footswitch and another HP.
A gain, volume, bass, treble, tremolo speed, tremolo depth, reverb and a "boost" to have a saturation a little more consistent.

Very easy to use, increasing the gain moving from a nice clean to crunch an exeptional for a transistor (this price is more!) To saturation cool that sounds like a fuzz actually .. . effect accentuated by the "boost".
the tremolo is superb, very fenderien ... just that it's worth the price of the amp really ...
the reverb is more than correct, very clean ...

The sound is quite roots, it sounds "real," far from the amp modeling of the same brand, for example ...
It is perfect for blues, jazz, rock ... just anything but this requires a large hyper-compressed distortion. sound has a great dynamic for an amp of this size and the bass is far from ridiculous.
I play with a TV 52 ', strata (vintage and modern) a gretsch ... all it does it very well ... with a little more for the instruments sounding like him, a little old school.
I also heard a vintage les paul and it seemed to work well.
I love the crunch, not very accurate and we really settle in millimeters ... and tremolo, beautiful ... it is almost like a twin ... without ruining the ears (and wallet).

In summary, this amp is just perfect for home use, small cafes to see if it plays concerts cool.
It will delight those who do not look thirty-six sounds is different in their amp but basically a nice clear sound, a great pitcher, an overdrive that has the bonus personnalié with a tremolo.
what this amp, it does so very well.
and the big surprise is that it is given: 140 euros ... (négociable. always ..)
I feel my marshall is going to feel abandoned.

nb: the 10/10 on each point is not absolute, I note of course depending on price.

arthur38's review (This content has been automatically translated from French)

Vox Pathfinder 15
5
15 W transistor, tremolo and reverb for the 15R. A guitar input (normal!) an output speaker, footswitch, headphones and a recording output, you'll understand it's very complete!
For the settings we find the dash VOX brown (superbe!!) With a gain, a boost, volume, bass treble, tremolo speed and depth and then reverb. For an amp of this price it's sold out!

Configuration is very simple though somewhat different from the other amp for clear sound on the gain put then push the volume up, then the saturated one plays on the two buttons.

The sounds are simply great. I have a Fender Champion 15 and there is really no contest: the grain is superb, playing with the amp.
So yes, as it is not metal, but blues, rock, jazz with a great vintage sound (I say light?). For metal, with good pedal, you will have the advantage of having a super HP Bulldog that will make good!
I take great pleasure in tweaking the little buttons there but enough to get an incredible range of sounds.
The amp responds perfectly to the tone of play, the volume of the microphones. In short you will understand: 10/10!

I play everything from black desire, ACDC, through the good blues, the radiohead, from Sinatra.
And then I confess that I have a great tool that meets superbly to square the circle of guitarist: a good amp not too expensive but great: well, here, you found it! (No I have no action at VOX !!!!)

I for a month, and I rediscovered my guitars. I tried a small package amp in this price range (100-250 €) and honestly I do not find is really a favorite!
In short, if I had the choice again, YES I rebuke and more than 2 times!!

Good scratching at all!

User/bob's review (This content has been automatically translated from French)

No problem use.
I got very easy nice clear sound with good dynamics. Saturated sound seemed a little worse and does not priori all needs. In short this is not a versatile amp trs, but may be suitable for blues / rock, rock styles, but presumably not requiring a large modern saturation.
It is not a small transistor AC30, it is said. Even if I have an affiliation peru it sounds trs Different.
The manual is useless except perhaps to be never used amp.

I plug my Tokai Breezysound (telecaster) on it and that's it. (For now)
The sounds are generally good even if we should not compare them too with sounds of lamps. I think priori that it will double coils well! Otherwise the potential is but we must do things differently.

Actually, I bought this amp in a blind intuition and thanks to the previous ones opinion. And even if my comments are justified previous ones really (trying to be objective), I'm a little rest on my hunger. Meanwhile I had the opportunity to hear my amp Future: A Sheldon TT3R, English amp craft on which the sound is with 3 knobs and especially the guitar volume. On returning I found the lil Vox dcevant

I did a little research and found a solution that suits me perfectly:
- Gain 2 hours
- Boost enclenchbr /> - volume based on neighbors

You plug the tv volume zero-and it mounts the volume of the guitar.
We have a range of sounds trs cool crunch of almost clear plutt wild. I prfre positions clear bluesy crunch. a real treat!
The saturation is obviously not the crmeux lamps but has characters that if one can dplaire, plutt sturdy and pretty wild.

In short, I found a nice little amp for apartment!

I use it for one month, I ssay few small lamps, which are also Valvetronix trs well but less endearing.
The report is really QualitPrix trs good, it is an amplifier 130 euros ...
I would do this choice, unless I could afford to offer me a TT3R Sheldon, but that's another story I'm working ...

Did you find this review helpful?yesno
»
Read the 5 user reviews on the Vox Pathfinder 15 »