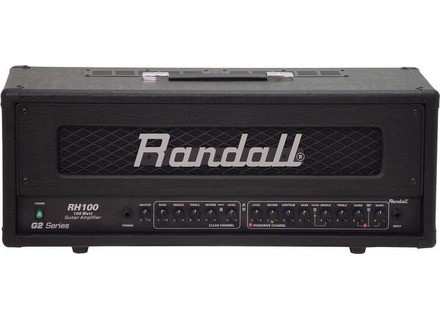 All user reviews for the Randall RH 100

Randall RH 100
5
I bought this head through Musiciansfriend.com
I payed $299.99 for the head. I purchased it because of the Sound/Price/and Warranty.

The Randall RH100 Head I got was a tough choice. I needed something solid that would deliver an immense ammount of gain that still sounded coherent. This amp is it. It will do anything from Pearl Jam-ish bluesy kinda stuff to the thickest hardcore right out of the box. I really like alot of bottom in my riffs, and this amp delivers that. Very solid sound and when picking single note riffs for instance Slayers South of Heaven or Dead Skin Mask, the RH100 keeps every note seperate and clear with a huge ammount of gain.
This amp has very little "amp noise". There are no hums or pops when powering on, and no noise when using the foot switch.
This is an excellent amp for both Studio and Live shows. I used to use a Digitech signal Processor to add a bit more meat to my sound, and since I bought this amp I haven't used the digitech at all. All in all you won't find a better sounding, or higher quality amp for the same price, in my opinion.

It's heavy. Kind of a bear to pick up and lug back and forth for studio sessions and gigs. Maybe I just need a Raodie.


This is an excellent amp for both Studio and Live shows. I used to use a Digitech signal Processor to add a bit more meat to my sound, and since I bought this amp I haven't used the digitech at all. All in all you won't find a better sounding, or higher quality amp for the same price, in my opinion. For Quality vs. Price, I will have to give The Randall RH100 a 5 out of 5.
You can hear this amp on our website at www.shadowspeak.8m.com

Randall RH 100
4
For those who know me, you know I&#39;m not big fan of net exaggerations or false test. However, my title sums up the back of my mind. I take you to the discovery of a head very / too little known in the brotherhood of metal. (Very) Small Randalll RH100.

For the little bit of history, this is the first HR Series ... directly given birth in the series and Century RG 2000. Thus, even very close to previous generations. Generation HR will then cease to change, modernize its signature sound, making it more "go anywhere". But by sacrificing all this violence that is present on this first generation.

The head is small in size, about that of a head AC30, Matchless and Budda SuperDrive. like it a little better in the trunk of the car is a bit lighter. But just a little.

The finish is not exemplary. Here and there one sees things that seem fragile. The knobs are good, vinyl is cheap, but less cheap as some entry-level series of Marshall. The cabinet is beefy and head breathing resistance.

Beware, however, its apparent resistance. The RH100 is an entry level receiver at the time. With its false notes inexplicable. Moreover, it is part of the great family of randall previous. This means that the receiver is sensitive to overheating. Therefore, never exceed the 2 / 3 to the master, and if you get close. Take a 30 minute break every 2 hours (storage area free). To avoid damage.

On mine, the processor was released before the purchase (repair marks).

Or, in the grip pure and hard, the amp is logical and simple. It can be played perfectly flat. it is an undeniable strength. Sounding at once huge and tidy at the earliest fragments of sound. Attention to use live outdoors where it tends to lack power to impose itself over long distances. Therefore, always use it with a 4x12 so it gives far enough.

To get to the point where even shows his ease. It&#39;s the sound capabilities. This head is CROY-IN-ABLE for everything that goes into the edgy rock and metal. Comparative tests even allow me to say that Mesa Single rectify was totally ridiculed by the leaders in this type of use, then one would imagine, however, as the best of the mesa by his side "reference".

But it is not. The Randall proved immediately comfortable on the clean. This is unbelievable and not the personality of the great Fender cleans, Carol-Ann or even Tech21, but it is clean and worthy of a great regularity. Unable to do cruncher yet, but the records metal is very good.

Channel 2, which shares its channel with eq 3, poured into a sound that is "heavy British". In fact, a variant of its high gain with a bit more hardness on acute medium, giving an impression to the leg british sound. We can get things going a crunch already nervous but not totally successful (sometimes hanging so low sensual), a beautiful palette of overdrives that have a nice aggressive chest bass.

Channel 3 also comes with a saturation increased and more regularity, which earned him a sound called Randallien. Very, very solid, very broad, square. A treat that has nothing to envy the kind of references.

Overall, the mute and agreements, the sound is massive, explosive and still has enough heat and unfounded. In solo play, the notes beyond the 7th fret and quickly begin to refine their sound you head explodes without warning. A player in the game could end up sterile faces its limits. But a good soloist will use this character who is almost automatically lead to boost himself.

Loyalty to the game is pretty good even if the amp is not a dynamiscien said. It will have the slender fingers for not sending the crap with this amp. Because the slightest false note is amplified and retransmitted inexorably with tons of gain, making the wrong result. There I found the best Mesa Recto.

There are also the sounds typical of previous generations, the brotherhood is undeniable and sound is magnificent. -Not because I can get a sound Dimebag real thing, no, I do not like the sound Dimebag, but it&#39;s a particular sound signature, explosive, no longer found on Randall today and is absolutely superb. As if we had put Satan in a box for us to restore it gradually.

We have not yet talked about the spring reverb. Rather in the low end of the class, which does help, gives some extent, but after a certain point metal rings and overrated. Did not some other super amps.

To close the pane comparative Recto - Randall, the problem of the Front is that it never happens, on the high loadings, to develop as much heat as the foundation and Randall. It seems downright slender crimson and next. The clean is worse, a little unbalanced, awkward. The dynamic is a little better, but it is negligible. The highlight of the Mesa was the solo, where she kept a regular and constant envelope, even in mounted games. But overall, invest EUR 700 in a head of opportunity to use metal is put at ease by a head at 120 euros, do not seem argumentative.

I use it for a little over a year now. I am a big fan of Randall and I owned many sets of the transistor manufacturer. But the RH100 is by far the series&#39; non-vintage "which sounds more in the tradition of the great amp Randall.

Not always melodious, she is brutal, shiny, sharp and lively. It also has some flaws in its design, it will accept. For me, an ultimate weapon for whatever needs a smash album.

Big Board! Go in with the good. Good speaker cable, jacks good, good guitar. Do not neglect it because-it is cheap. She will then make you a hundredfold.

Last advice! Beware like the plague models "failed or who have lived much / shot." Randall, after the takeover, has scrapped all plans and documents from previous series of amplifiers. So, you have no possibility of repair, no service, no advice. It is particularly serious bit of Randall and deserve more than they ever sell a single amplifier. The amps are not iPhone, they throw after 3 years to buy the "new revolution". Weak, guys, just weak!

bru776's review (This content has been automatically translated from French)

Between a Great and a headphone output faade, 2 out firm, a direct recording, an effects loop with volume rglage send and return back.

The configuration is very simple: tois CHANNELS faade are configurable.
Hot Song clear and deep, good reverb amp for this type of metal rather orient.
BIG SONG SATURATED with both channels, however, a little Criar in the medium there who loves has! No EQ MULTIBAND

For the heavy, thrash, emo, metal has made a big distortion of pantera slayer.
For my part I Utis in conjunction with a baffle that Peavy of 5150 for many low chopper. With an esp or jackson humbucker neck or a chevalte lfait

I use it for a year but I sold it becaufe c The time of the concerts so far and I raba on my line6 modeling has to do with taking home.
I have several amps is all a matter of taste and above budget for the East RANDAL RH100 mtal I recall, the quality / price 600th nine is interesting.
Did you find this review helpful?yesno
Cookies help us improve performance, enhance user experience and deliver our services. By using our services, you agree to our use of cookies. Find out more.