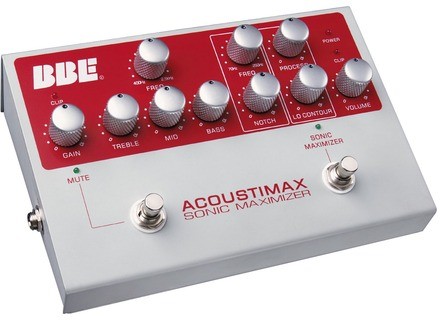 View all offers for BBE Acoustimax »

BBE Acoustimax
5
World famous as, Kevin (The Ultra-Lounge Lizard) Mattson, I was a solo club act throughout the 70-80s golden era of live music. Every club, hotel, restaurant lounge wanted a live act back then. And there was a big niche for versatile soloists who could cover singer/songwriters like Croce, Taylor, Chapin, Fogelberg, Simon, etc.

Now senescing in Duluth, I have a publishing company and a small recording studio where I continue to produce smash hit CDs.

More seriously, I have been recording, producing both live and recorded music for more than 30 years.

I was deeply impressed by BBE's "Sonic Maximizer" software recording plug-in. (I'll review that too in Recording_Gear.) I emailed BBE and asked if they had a product that would improve the sound of an acoustic pickup on my 12-string Larrivee. They suggested their Acoustimax preamp with Sonic Maximizer. It runs $200 at all the dot.com music dealers.

The Acousimax is top quality, quiet preamp with 3-band EQ including a sweepable midrange knob. It would almost be worth the $200 for the preamp alone. But it also has BBE's Sonic Maximizer effect.

This effect is remarkable because it seems not to add, but to remove the sense of "effect." The Sonic Maximizer technology compensates for the inherent distortions in audio caused by the physics of loudspeakers in particular and other transducers and electronics in general.

The bottom line is that the audience hears a much more realistic, rich intrument.

I'm sure this preamp would work equally well for any acoustic instrument with a pickup.

The box has two stomp switches, one mutes the box, the other engages the Sonic Maximizer circuit.

I must mention the versatile outputs on the back of the Acoustimax. In addition to the standard Line Out, there's an XLR output making it a high-class direct box. There's an FX loop TRS jack, and an always-active Tuner Out jack so you can tune even if the mute switch is engaged.

The display is as simple as can be. LED's indicate the status of "Power," "Mute," "Sonic Maximizer," and "Clip."

Only one thing: The cheap, generic power supply. The tiny guage wire from the wall-wart to the plug won't take much abuse.

The Acoustimax requires an atypical 12-volt 300mA AC(not DC)output power adapter. It has no marking on it to associate it with the Acoustimax, so label it and don't try to replace it with a "DC" adapter.

First, it's an all-metal tank. It truly is a stomp box you can stomp on.

Next, it has lovely, smooth-turning metal knobs for each function  no foofoo cheap digital controls.

Finally, it has solid foot switches.

I you play an acoustic instrument with a pickup system of any kind  piezo,mic, or blend  the Acoustimax will serve as a great preamp and direct box. And BBE's Sonic Maximizer section will let your audience hear excellent depth and richness from your instrument.

mu75's review (This content has been automatically translated from French)

Configuration is very simple, no need for manual, it's plug and play.
We quickly correct a sound (with equalizer).
And aesthetics and maneuverability are Russias.

I used it with a Gibson J45 Pramp (Fishman Matrix Natural piezzo 1), a Martin D35 1975 with micro LR BAGGS M1 ACTIVE, and Gibson songwriter deluxe strandard team a piezo / pr amp Fishman AURA ELIPSE.
In three cases this Pramp help sculpt the sound exctrmement well, it is a further upstream of an acoustic medium range amp for example. It also dpanne in rehearsals or mixing consoles are often of average quality and in small concert halls for the same reasons.
However on larger scene or consoles are excellent quality such case upstream will do nothing. You will just need an excellent Avalon U5 DI kind.
If I davais arrter to the judgment of Pramp / equalizer, I would put 7/10.

The maximum section: Magic certe! Enlargement of the spectrum, beautifying the perception of sound ...
BUT: It keeps Buzzer !!!!!! And the pots are unusable so the sound becomes coarse and strident when you push them.
I ramen my pedal to the store, the seller has tried his system, the pedal buzzait serious indeed, it takes another new, same ... then another, like .. . then another, same result ... Let me tell you that it is the one manufacturing defects on a whole series of Acoustimax.
The views and regret this situation and to maximize section, beautiful but USELESS !! I votrais: 0/10 !!!!!

What saves this tool is its practical side, adpanne upstream of an average hardware.
But if you go on runs on big shows or if you play in well quips in his clubs, this device is unnecessary and dtriorera your sound.
The report qualitprix is ​​bad in terms of maximizing the default manufacturing.
How can one day sell our pedal that much buzz !!!
In short, I pedal my ramen for me to reimburse
My buddy like mandolin.
Too bad because this pedal dgage when even a good sound Pramp, the EQ is of good quality and nice look.
But today we must demand perfection of products that buys!
Working with BBE bacl !!!
Did you find this review helpful?yesno
»

nakatano's review (This content has been automatically translated from French)" Excellent preamp."

BBE Acoustimax
4
The overall presentation of the product is easy to get, I let our friend Google fulfill its role.

Used to pre-amplify a classical guitar Maurice Dupont with a Schertler sensor before hitting the table and / or a sound card (Motu or RME).
Also used on an electric guitar or Larrivée, a Rhodes.

The connection is very well made and sturdy, nothing out of the ordinary, which is good enough when the tool is well thought out, which is the case here.

I never really used the DI output, since to do so, I prefer to "trust" my signal to my Radial J48.

The unit is really sturdy (so heavy) metal, made for the stage and its hazards ...
The manual is in English, but is it really necessary for this type of product, moreover, very intuitive?

The controls are very effective (but beware not too "fall in love" Sonic Maximizer which, in my opinion, must remain a phase corrector-very effective and non-resident, a boost of low frequencies; your engi -son enjoy this shade!).

Very good product, although preserving artifacts and defects of a preamp "electroacoustic" (treble always a little too slap bass and still a bit too soft on a classical guitar, with a touch of classical guitarist).
I used it in conjunction with a tune by micro cardio, it allowed me to get quite full and warm sound without having to suffer too worries larsens volume (reasonably) high.

Konecticart's review (This content has been automatically translated from French)" tres bien!"

What connection? in and out jack, XLR DI output in
What are the settings, the effects? ... Preamp with EQ, notch filter, excite typical BBE

The configuration is it simple? yes very simple
Gets it easy to sound good? yes its not good coloring
The manual is clear and sufficient? there's little but enough

Is it your style of music? suitable for all styles in my opinion
With what (s) guitar (s) / low (s) or effect (s) do you play? with my ukulele, and it works pretty well
What kind of sound you get and with what settings ("crystalline", "bold", ....)? a little lens, "BBE processor" is really good, it looks like it gives air to the sound, which spreads the sound in its most dynamic sound field, its wider
What are the sounds you prefer, you hate? hack is found pretty quickly what works

How long have you use it? for 1 year
What is so special that you like most? good preamp, bbe effect I love
least? yet nothing ...
Have you tried many other models before buying it? No, I did not want something to light so I had no choice and I wanted a certain sound quality, design, durability,
How would you rate the quality / price? very good
With experience, you do again this choice? yes without hesitation! I think the only competitor Acoustimax is the LR Baggs Para Acoustic DI a bit expensive

Did you find this review helpful?yesno
»
Read the 7 user reviews on the BBE Acoustimax »

See all 166 photos of BBE Acoustimax »