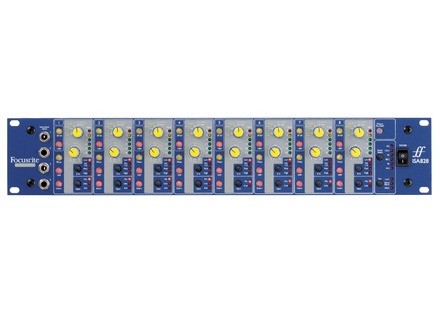 ISA 828, Solid-State Pre-amp from Focusrite in the ISA series.

Focusrite ISA 828
4
The Focusrite ISA 828 is an eight channel solid state based set of preamplifiers. Each of the channels has the same make up, consisting each of both XLR and 1/4" inputs and D-dub ADC inputs and analogue outputs. In the front, it also has 1/4" inputs for easy access for your instruments to channels one through four. The unit is indeed rack mountable and will take up two spaces in a traditional rack casing.

Being that each of the channels has the same configuration, once you understand one of the channels on the Focusrite ISA 828, you pretty much know the whole unit. Each channel has both line and trim knobs, as is the case with a lot of the gear made by Focusrite. It also has a mic/line/instrument selection button, and for choosing your setting for your Z inputs, which is between lo, mid, high, and ISA 110. They also have buttons for +48 volt phantom power, phase, insert, a high pass filter, and for choosing the range on your line knob leveler. Unless you are new to the configuration of mic preamps, I don't think that you'll need a manual with this one.

The sound quality of the preamps on the Focusrite ISA 828 are really nothing to write home about, but by no means do they sound bad. They'll certainly get the job done more times than not, and especially in a home studio environment. You do have a good amount of control over what you can do with each of the channels, which definitely adds to reasons to check out the 828. They preamps don't really favor any one application over another, as they are pretty well rounded and will sound the same for most applications. They definitely aren't the warmest sounding preamps, but when you're getting eight of them in one unit, that's not something that you really expect.

The Focusrite ISA 828 isn't my favorite set of mic preamps, but if you're looking for eight channels at a reasonable price per preamp, the ISA 828 should definitely be looked at. However, unless you really need all eight channels I'd recommend getting less preamps of something that sounds better, but it really just depends on what you'd like to do with it. I'm not a huge fan of Focusrite preamps in general, but these are pretty decent considering you're getting eight of them...