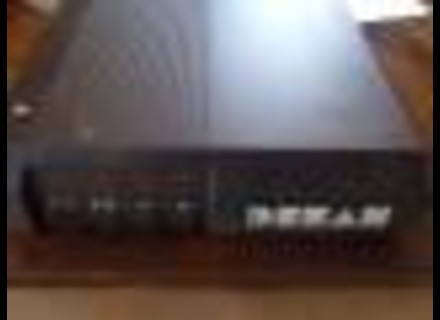 Dream Sam XR
3
Rack expander, rather than synthesizer sound module, synth part consists only stack sounds and adjust some basic settings. In fact for those who know Roland, nearest U-110 as D-110 (about the same time), the slot cards less.
For the rest, See what Lux inferno (judging a little harshly this machine) said.
No utility has never existed, except those that were fun to program themselves some users. There are hidden features or not accessible by keyboard, but no doc on it today. The EPROM is a slot and the curious can always disassemble. I had found one that was very useful, but it's been so long ...

The use configuration is simple compared to what is done today "Today, but I must admit that at the time it was quite dark. Editing sounds is not very convenient for those who want to use the machine background. For just use the basic sounds, there, no need to book. Going further, it is necessary. manual itself is pretty average.

Sounds have aged, but the organ that has a color that I still love (I kept only for this). At the time, let's be honest, the sounds were good, there were better, but we can not compare with, for example, a D50. The problem is that this is boiboite output when a revolution took place in the field of synth sounds. She found obsolete even 6 months. Why? Simply because it used what was best at a time when you had to go ahead and propose new. Dream that was not so bad was then made by laminating concurrency.
Sounds proposed correspond to the needs of the release day, but not needs a few months later.
So good, but not enough and too late ...

The quality / price ratio at the time was good. I did not have the means to take me a Roland at that time. Today, for 50 to 100 €, it is better.
This machine is that its relative rarity. This is a museum piece.
For a collection of old synths, go for it, it's still cheap. For musical use, take something else.
In 20 or 30 years, this thing might be worth much more.
The beast is robust. To change the battery, the manual is essential because there is a procedure to restore the sound. Do not worry, they are in EEPROM, so unless a helping unfortunate 15 volts in the circuit, they will never be lost.

EDIT: Regarding utilities, the company Dream had planned to release something, but she had to drink the broth before. The unit remained incomplete, like the Roland VariOS which were provided lots of stuff and stuff that never emerged.

Lux Inferno's review (This content has been automatically translated from French)

Dream Sam XR
1
Few lines on that thing is forgotten, because I think he (vintage sleeping is not always gold).

Socit Dream a silent Socit Franaise which had its heyday in the 80s leaving some expanders, including this one, the look is also pretty typical of these years are the (please excuse the blurry photo, unfortunately I found nothing else on the net, Sat expander that I no longer availing oneself of frontage, which is why I ' I saw you inflict a photo of a crippled).

This expander is Plutt an external sound card, which was to connect a Mac from Apple under the RS 232 is the codend, cluck of the traditional trio of MIDI sockets (in , out, through), a stereo output jack to RCA connector and power button on startup (power for Anglicists).

The sounds and performances of the beast: 99 sounds, including 3 sets of rhythm instruments, 32 including 4 programmable MultiPatch factory, 16 voice polyphony, multitimbral and 8. There stepfather has one case of synthse PCM 16 bit (do not laugh, put a in the context of the era, expanders small budget that you were outside the 16-bit there was no masses). This thing sounds purely numrique, with a strong cot synthse FM.

Regarding the Publishing of sound, he can have that software exists, I can not say, another surfer confirm or deny this.

Gnrale configuration seems simple, yes. For the rest, no other info.

I do not use this gizmo, I got a gift cl door through a purchase of synthesis (the Kitten, you've already heard talk)

To be honest, sounds are ok, but very "common", this module is wanting to "mainstream".

Should acqurir this module in 2009?
If you give it, enjoy and be a little curious, if your DIY circuit bender the thing, it lends them well (+ PCB a central processor).

How much worth?
I would not presume to fix a hill by my only comment. Let's say a Yamaha TX81 Z, a Roland D110 does ngocient that around 50 you offer more possibilities than this dream hexagonal Exceeds frankly.