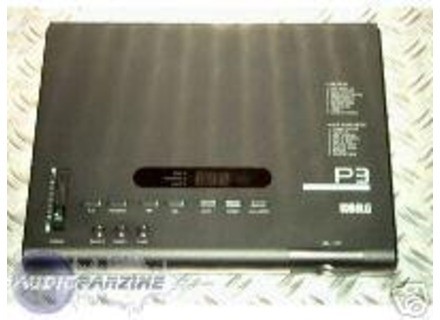 Korg P3
4
The Korg P3 is an older module that will still kick out some pretty solid sounds for your music. If you are into some of the M1 sounds that Korg had than you are good to go with the P3, it has some of the same sounds but basically the same feel of the Korg M1. Even though this module is older it still may have some stuff you might be interested in using. I still love a lot of the sounds that it has on board. I am not a fan of the effects though, I have to run it through my effects channels in my daw just for more versatility because it lacks in the effects department.

Setting it up was easy and no need for a manual as I just used it mainly for the presets and nothing more, even though there really isn’t much more you can do with it. It has a 16 voice polyphony. Using all of the basic functions of this module are easy to access and keep in mind that you cant rack this unit (don’t know what they made it like this) but you just have to set it somewhere and it also seems to be pretty fragile I wouldn’t want to take the risk of knocking I off of a table or something so keep it somewhere safe.

Sounds are good on the P3 I still use some of them today, and some of they piano’s sound full rich and amazing like some grand piano’s I have used. But of course you wont get the grand piano feel if you are using a cheap midi keyboard to play the sounds with. Also make sure you have a good audio interface with this because you don’t want lag between your midi keyboard and the audio coming out of the module also known as latency. You can find this module by Korg online or even on eBay and its pretty cheap.

jeffdepanam's review (This content has been automatically translated from French)

Korg P3
3
Long ago, long trs a sudden passion for the Korg M1 synth s'emparra of many musicians, they were seen selling moog, the ARP, the Oberheim, Sequential Circuit and others to buy the M1!
The three piano module P is a product of M 1 driv. This is the piano of M 1.
Non-rack, 16-voice polyphony, MIDI 1 or 4. Until it s easy it is now that it is complicated: the 3 P 1 may play simultanment 8 stamps, multi-mode, 8 channels noon selected and one of mmoriss 16, but stamp of what is it? These two stamps piano concert (Piano1, Piano2), the other 6 from a card option ROM CHRE and indeed quite as much as I can remember. There is a drum set, a brass, strings, guitar, bass, etc ... 6 short, what one could do better in the era of Contents sample.
Stereo audio output is bi-or sound, choice, MIDI IN, OUT, THROUGH.

Once we understand how it works, thanks a manual clear Franais, a motion.
It is futile to program more than 3 sounds, given the limited polyphony (16) of P 3, especially in gnral one keeps a piano, which he alone justifies its use.
I use prfre mode and monotimbral bnficier and a polyphony comfortable.

We never found the sounds of P 3 in my compositions, even if he serves as a tool for harmonic diffrent parts of a piece;
Once the piece composed in P3-I distributes parts to synths, making that the end is no longer heard. Such is his fate. Yet it has the PCHE and expression, well-sr aftertouch, but Controller 3: 64 = Damper is the great pedals of a piano, and Sostenuto 66 = 67 = Soft, like for real. Since then, it was much better, I guess.

I've since its release (in 1988) and never fails (anacoluthon ugly!).
The only minor default that I found is in mono, it is still pervasive on the ignition and it must send a message omni off mono (mode 4) that includes;

If I had to sell it, with 2 ROM cards, it would be in the 100.
But I never will sell, because how one expander piano score today, if indeed there are still new on the market?