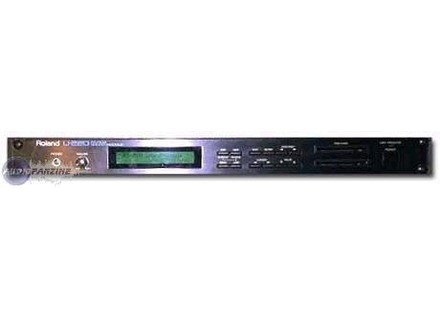 Roland U-220
3
The Roland U-220 is a pretty good sound module. The u- 220 isn’t the best sound module Roland has came out with but it still holds its weight. Roland prides themselves on creating sounds that are big and very warm sounding. I have used several other Roland modules and workstations, but this is probably in the middle of the pack to me. Nothing really stood out to me on this module. Most of the sounds are very basic sounds that come with almost any module.

The Roland U-220 is Midi in and out like most modules do as well as audio inputs and outputs. Set up was easy and just incase you need to use the manual its very clear and concise and will get you up and running in no time.

As far as the sounds go they are ok, many people like the sax and brass sounds of the Roland U -220 but I feel like they fell short with those, you can pretty much get a better sound from Kontakt Sax and Brass. Kontakt Sax and Brass cost pennies compared to the Roland U -220. Some of the leads are pretty good though, but like I said nothing spectacular that stands out to me.

Overall the Roland U-220 isn’t bad and the price isn’t as high as most modules are. But this module felt like Roland didn’t put more time into creating something that was epic like there other modules. The learning curve on this is simple you will be able to work yourself through the board without needing a manual. The sounds on the Roland U-220 are outdated though, like I said before you can get almost the same sounds in some softwares that are out on the market today. I used the Roland U – 220 for about a year and a half and after that I was pretty much done with it and didn’t want to mess with it anymore. I recommend going with the higher boards that Roland Makes.

Roland U-220
2
model rack, 1U, MIDI IOT. The sounds are very slightly edited. It is a ROMpler. Two internal effects.

It's horrible to handle. The logic is amazing. The sound editing is difficult and address.

sounds good: a nice chorus, 2-3 low natural warm the fairlight vox, and some sounds of D-50. The rest, for me, not worth the detour. It was very, very badly aged.

I use it for almost 15 years. First, it was nice, but it quickly showed its limits. Frankly I would not buy if not for the fairlight voice is excellent and I would miss if I did not.

pascal.monte's review (This content has been automatically translated from French)

128 samples of core memory.
6 + 1 track trail percu
- The stamps are from samples of RALIS trs good quality by affecting the pitch, modulation etc. ...
- Patches the assembly of a maximum of 6 stamps couraging trs rich sounds, with the possibility to assign a MIDI channel for each stamp, which lets you play tracks diffrent 6 of 6 channels Different. we can associate multiple tracks on a common channel for enrichire.

The trs are its clear, almost no background noise.
The most part of the sounds are acoustic instruments, but also of possde good analog synth sounds.
The layers of violin, chorus, and piano are beautiful!

bidule's review (This content has been automatically translated from French)

Roland U-220
4
19-inch rack. Expander, 6 individual outputs. Intgr assignable effects and is not.

First look at home even, then consult the manual ..... There are clearer, more sanitized!

It's the same with the Roland machines, since the gear Fast Fashion: The sounds of plants are fool quality ..... BUT the additional cards reclent trsors insouponns. Just fantastic (the cards). Whether acoustic guitars (Map 14) splendid, the saxes (Map 12) irritants ism, sounds of the orchestra (maps 5 and 6) and the RSID's all in the cards. Obviously the cards are not free and are scarce on the market opportunity.

I use it since its release. Trs good gear, provided you have the sound card. As I have (almost all, and finally 12 cards) I have no regrets.

Did you find this review helpful?yesno
»
Read the 5 user reviews on the Roland U-220 »

Roland U-220 manuals and other files