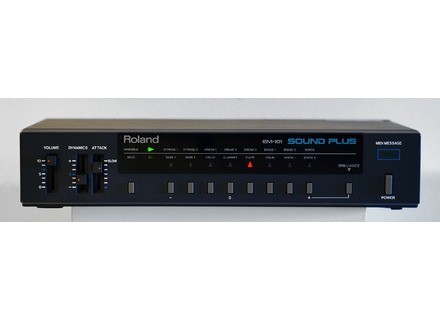 Roland EM-101 SoundPlus
3
Roland’s EM-101 Sound Plus is a MIDI expander that features 6, non-editable Juno voices: 8 poly presets, 8 mono presets and 8 (surprise !) hidden presets. Unrealistic analog, then.
Controls include Volume, Attack, Dynamics (allowing to modulate the volume, but it can also be quite interestingly used the other way around). Plus, a bonus Brilliance setting that sounds more like a tone than a cutoff control. Regarding connectors, a MIDI duet, a ¼” Jack output and a footswitch input fot the mute function. In the end, very easy to use.
I had started to look around for mods so as to make it more versatile, I know that some went way further (more details can be found on the web).
There’s also a video tutorial that shows how it works.

So, how does it sound?
Well, a bit like a Juno trying to imitate other instruments. I find an interest to 3 or 4 presets at best, but it’s up to everyone’s taste… Among these, two Strings and an Organ preset. Picture yourself back in the 1980s, with those synthetic strings and organs that have become real references since then. However, as for the sounds labelled “trumpet” or “piano”, that’s another story.
It can suit a Krautrock fan, or be of use to anyone revering these old-school sounds, but in all cases you’ll have to do with what it can offer in three minutes of tweaking as you won’t get much farther without adding a few effect boxes.

I personally sometimes use it MIDI-controlled by a Little Phatty, injecting the audio output into the said Phatty to get a colored paraphonic, Moog-y sound. The Phatty’s mixer is unfortunately quickly overdriven, but that’s a real pleasure to get huge overdriven sound textures. Maybe an MF-101 would be better suited for the job? The Phatty’s point here is that you can tweak the note priority setting to get a bass and overlying chords, or chords and an overlying lead sound, with all pertaining constraints. However, constraints can be stimulating, ain’t it?

As for synthesis (hohoo), it’s a very simple analog module that’s to be taken for what it is: it can be a nice instrument for whoever prefers an RS-09 to a Nord Electro, or a TS-909 and a Holygrail to a great multieffect – so in the end whoever prefers a unique yet minimalistic sound to something more diverse and complex.