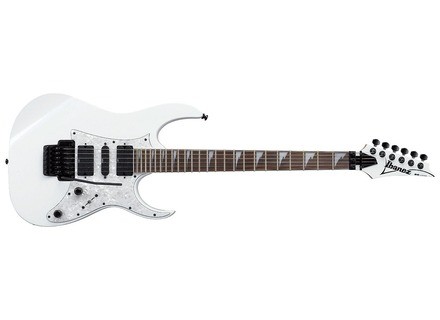 RG350DXZ, STC-Shaped Guitar from Ibanez in the RG Standard series.

Ibanez RG350DXZ
4
So, first of all ... Welcome to the world of shred and rock to hairy (and you will see that not only ..). Though, here for parenthése.Alors ... It is made in Korea (I think) has a bridge edge zero 2 with ZPS3Fe system (all of the Ibanez), a Wizard III neck (very flat the way) with rosewood fingerboard, 24 jumbo frets, 1 humbuker INF4 an acute, a single-coil in the middle and INFS3 INF 3 in a humbuker grave.On has a volume, tone and a 5 position switch (positions are:, 1 st 3 ith micro postion, humburker acute alone ith 2, Spool of high acute hurburker + single mico middle simble middle, 4 ith coil bottom of serious humburker + micro single middle and 5 ith position of humburker grave.Classique Ibanez what!) and titeul American corp.

My style of music: Metal (in the style of Metallica, Iron Maiden and megadeth) and sometimes I play blues, hard rock, punk and funk (I know this is a very large directory) What she plays well:. From punk, its going very well (like Muse that are very good), the metal (but Doom, you verais why ...), in hard rock is a goddess if I combine with evening modeling Mesa Boogie Mark-II + is the vox nightrain O_o I blues is average (but depending on the amp&#39;s getting better), its going moyenement.Le funk type of sound that has its clear obient LITTLE FEVER ( regardless of the position of the pickup selector) for meter forward the medium (that is positive but also negative ...). There is a simulation of the vox VT20 which has efect not change the sound or filter the sound of the guitar plugged into it and I just noticed is the medium of Gouré with little sharp (I&#39;ll meter after a sample). Basically, it&#39;s bold, regardless of amp! So I &#39; obtained without a problem sounds AC DC (but slightly less accurate.) This guitar is perfect for recording with the pan completely right and completely left that the meter must be less gain for sound and well it is just to need to troubleshoot a completely scratch right and another completely breaded right: It takes little to gain what is the material that I use with, read the "use" in!. its EXTREMELY saturated (type Iron Maiden or Exodus), it sounds too little presision for me ... But as I said, we can scratch the failure, we lower the gain and lack of presicion disappears completely! The sound is generally round in attack and rather muddy bridge pickup for my taste HI-GAIN cruch but it&#39;s just a delight

But my favorite is the sound of this guitar not: I prefer the accurate sound and I tranchant.Mais &#39;ll say something presicion the neck pickup:! THIS IS A TUERIE In hi-gain, was the sound of Steve vai (if I use a Mesa Boogie rectify boosted), crunch was the beautiful blues and clear, unfortunately, when we play in the bass generally do not follow the HP and its devien muddy (I alot inadvisable to use it on a full clean bass if its resemblera NOTHING) (I forgot to say : The sound is more like that of a Les Paul that has a RG O_o)

I use it for almost one year, I have not tried any model before (I have not even tried carément anything because there is no music store on my island that offers guitars that suit me so I have taken on the internet) What I love most:.&#39;s sonic palette, rendering large and small grunch satu.Se I like least: The bluntness and weight (from which I plays like a standing seem to have all of a sudden dropped so it&#39;s loud for a guitar, but not loud all short compared to my saque of college). RAPORT The money is EXELLENT (a hand that micro not bad, but THAT AT IBANEZ proposed METER THESE PICKUPS ON A GUITAR LIKE??? Violin with bass + microphone with low = MANY LOW and a draft sond hi-gain ... Maybe ! Noél as I Metral of mircros EMG instead .. I would make an edit to tell you after I&#39;d probably do it again this choice, it is thanks to this I apris much anything on the guitar: The floyd , sleeves, humburkers ...). I&#39;ll tell you after the result! later!
Did you find this review helpful?yesno
»