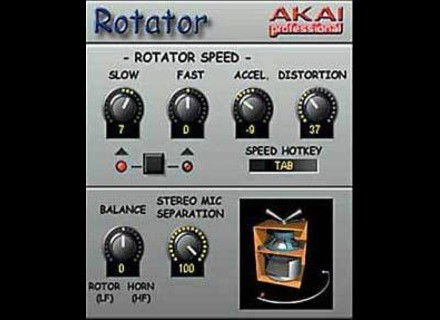 Akai Professional Rotator
4
Akai's Rotator plug-in is a simple Leslie type of simulator. I don't remember where the origins of this plug-in are, or even what sorts of formats it's available in, but I used to run a VST version of the plug-in in Cubase SX. I believe that I got the plug-in within an Akai plug-in bundle of some kind, but I don't remember exactly which one. The process of installing the plug-in should only take a matter of minutes - just follow the simple step by step instructions as you would for installing any software. The interface of Rotator is also really simple, as there isn't much that you need to know in order to use the plug-in. It's got parameters for slow and fast rotating speed, as well as for acceleration and distortion. The plug-in also has parameters for balance between the simulated horn and rotator, as well as a knob for stereo mic separation. I haven't ever seen a manual for this plug-in, but I don't believe that one is necessary anyway.

I'm no longer running the Akai Rotator plug-in on my Pro Tools system, but when I was running it, it was in Cubase SX 2.0 and 3 on a Hewlett Packard Pavilion dv 8000 lap top with 2 GB of RAM and a 3.0 Ghz processor. This was enough to get the job done in terms of running a good amount of tracks and this plug-in, as I can't recall ever having a problem with the performance of the plug-in. It isn't the type of plug-in that you would need to use all over a session, so most users should be all set here...

While Akai Rotator plug-in didn't see all that much usage when I had it, I just didn't have much of a need for this sort of effect at the time. I would still use the plug-in if I still had a compatible system for it, but I've got a good replacement in Pro Tools with the Voce Spin plug-in anyway. This is a pretty nice sounding rotator plug-in, but it definitley isn't the most realistic sounding that I've heard. I do like the parameters available however, as they bring a unique spin on the Leslie effect. If you do indeed have a compatible system, I'd go ahead and see if you could snatch up this plug-in on the cheap or for free...
Did you find this review helpful?yesno
»