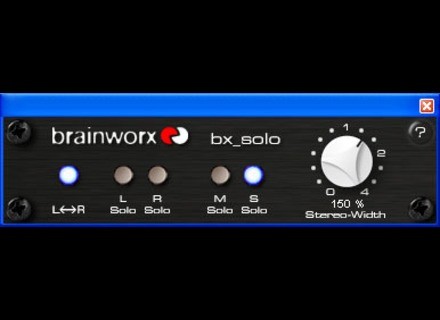 Brainworx bx_solo [Freeware]
5
The Brainworx BX Solo plug-in is a free one that is based around M/S technique. You are supposed to be able to use this plug-in for mixing or mastering, but I've only used it for mixing small projects and messing around. Essentially, the plug-in can give you a wider stereo spread for your mixes. The plug-in can be found as a free download on Brainworx's website and is available for both Mac and PC systems. I'm not sure on all of the different plug-in formats that it's available for, but I'm currently running the RTAS version of it in Pro Tools LE. The whole process of downloading and installing the plug-in won't take you very long, as I had the plug-in going in my DAW quite quickly after downloading it. Using the plug-in isn't too hard at all, as it's pretty self explantory. Basically, you've got a knob for setting the stereo width, and then buttons for listening to different parts of the stereo spread, including for L/R and M/S. I haven't ever seen a manual for this plug-in, nor will I ever have the need to seek one out.

Right now I'm running the Brainworx BX Solo plug-in on a Mac Book Pro that has a 2.2 Ghz Intel Core 2 Duo processor and 4 GB of RAM to work with. As I stated before, I run the RTAS version of this plug-in in Pro Tools LE 8 that I run with a Digi 002R audio interface. I've only ever used this plug-in on the master fader, so I haven't exactly tried to max out the performance on this plug-in. However, if you use it for what it is meant to be used for, you should most likely be using it in the same capacity. I've been running this plug-in for about a year or two.

While I don't exactly find myself using the Brainworx BX Solo plug-in everyday, it's still useful to have around for when I might need it. It's definitely great for spreading your stereo width a bit, and it's a nice plus that it allows you to listen to different parts of the spread including M/S. I can't complain at all with this plug-in being that it's free, and even if I could, there wouldn't be many bad things to say. Even though most users out there might not need something like this, my philosophy is that you might as well have it just in case since it costs nothing to you...