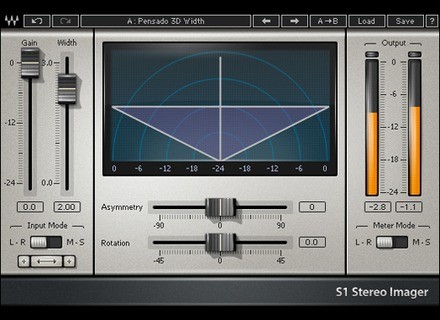 Waves S1 Stereo Imager
4
Waves S1 is a software effects plug-in to be used in a DAW. All Waves plug-ins can be installed by downloading them off the Waves website. Authorization is completed using a USB stick as a dongle, or using an authorization manager application if your computer connects to the internet.
Waves plug-ins are know for being stable, and rarely have any bugs. The 'S1' plug-in has been around a long time, so you can be sure it works in all popular DAWs.

This plug-in is about as simple as a plug-in can be. There is one main control to change the perceived width of a stereo signal. I don't really have a use for the 'asymmetrical' and 'rotation' controls because I typically want my mix to be symmetrical. I supposed if I use some stereo micing technique, and one mic turned out to be louder than the other, then these controls might come in handy.
In practice, I find it best to just add a little bit of width. Taking it to the extreme might be a unique effect to add every once in a while. But to me, it can be a little to much. Typically, I use the S1 on overhead and room drum tracks. Sometimes I will just throw the S1 on the drum bus. However, this can sometimes pull the snare from the 'center' depending on the mic setup while tracking. This is why I typically use it on the overheads and room mics that where recorded as a stereo pair.

The Waves S1 is great for getting the wide, large, spacious drum sound. I also like to use it when I track a 'wall' of heavy electric guitars. Don't go overboard with this effect, a little goes a long way. Something really cool about this plug-in is the Mid-Side (M-S) processing. This will really enhance any tracks that use the M-S mic technique.
All in all, a simple plug-in with a simple purpose.
Did you find this review helpful?yesno
»

Waves S1 Stereo Imager
4
Stereo spreaders are great, assuming you use them for the right kind of music and use them sparingly. Explaining exactly how the plugin works is pretty difficult, but it basically turns something mono into a stereo effect. It's not quite the same as a true stereo sound that was recorded twice, but it gets a similar effect. The plugin laid out great and isn't too terribly hard to use. It has the following features: gain adjustment, width, shuffle, frequency, input mode selection, left/right phase, input channel swap, bass trim, asymmetry, rotation, output mode adjustment, output meter and more. To use this plugin, simply enable it on whatever buss you want to have that stereo effect on and start tuning it. The plugin is simple enough to where you shouldn't need to read the manual, but Waves manuals are very helpful if you do decide to read it.

In the past, I used to really abuse these stereo imaging plugins, and it would always add this very bizarre high end to a mix. I've since calmed down on that, but I still use it from time to time for a certain effect. I know some people really like it on drums and vocals. I recommend not using something like this for guitar or bass, but if you mess with it just right, it might work...
Did you find this review helpful?yesno
»

Waves weekend deals for this Saturday