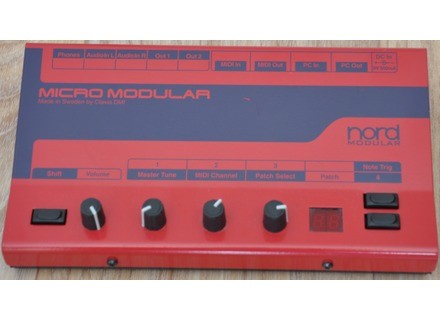 Clavia Micro Modular
5
This small machine got ALOT. The only thing i miss is some memory for making my own delays n' stuff + use own waveforms in an oscillator. 2 an-inputs and 2 an-outputs (and phones ofcoz..). 2x2 midi (1x1 control and 1x1 data). 4 knobs (one for volume, 3 for user defined controlling) + 3 buttons. (2 of them can act as a 4th controlling-knob). I use OS version 3.03

Do you know how a modular synthesizer works? Then it's no prob.. the editor is very easy to use. If you are interrested in how a synthesizer works... this must be one of the best ways to learn!

Well.. this is imho the best VA (after it's mom and dad, nord modular rack and klav.. same synthesizer but with less DSP power). Most dynamic and best sounding (it can do all nord lead 1 and 2 sounds with some work).

I've misstreated mine pretty much.. it has never acted strange (except before i throwed away my old midisport 8x8 interface that just didn't seem to handle the modular). It's very good built. The knobs really knows their place.

I'm gonna get the nord modular klav... some day..

To play this synth, no lizard, one branch and it works. To edit the sounds with the PC is the modular synthesis thus a complex hair still ... but incredibly creative! and then the possibilities become endless.
The +: a small box that is autonomous once set for the live is handy.

The icing on the cake is the presence of audio inputs, which allow you to use the bug to apply effects, and even make the vocoder!

I pretty much used the MM, probably because I found it easier sounds I was looking elsewhere (eg my MC909). I mostly used for bass sounds very synthetic and fat, and 2 or 3 times a dilapidated kind vocoder effect. I also find it fun to produce layers of sound that change randomly.
I used a little electro live for a moment, driven by the sequencer of my MC909.

This is clearly a synth and studio tool rather than focused on realistic electronic sounds, and requires the user a little experimentation, but with all the sounds that can be downloaded can possibly happen to wire boiboites on the screen! (I find it amusing ... I switched to Reaktor!)

A decade of intermittent use, sometimes with very long pauses (it must be two years that I have not used but writing this review makes me want to get back!)
Never technical problem.
And especially the original sounds that can change at will and can even create from scratch and effects

I do not remember the price at which I bought it, but I do it again this choice without hesitation (!)

Clavia Micro Modular
5
everything has already been said.

easy to use as synth.
A program on the PC is more complicated, you must have some knowledge of synthesis.
It is possible to download sounds on the net, there are millions of patch.
It can hold 100 at a time.

I had a lot of synth and frankly this one because of the price bin and I would not sell ever. The sound quality is superb, the virtually endless possibilities. Very good quality leads and all octaves. Very low acid incisors fatter than my or my RADIAS JP8000.
Synth less "crazy" than my ms 20 but a must have!!
Oh yeah and he also vocoder can process external audio signals.

Jack T Phridge's review (This content has been automatically translated from French)" Sweden Heaven and Hell!"

Clavia Micro Modular
4
I will not go on characteristics: see previous posts! (And yes, I know, I scrolled!)

We can not say that this is exactly "simple" to use. But at the same time time, this is not the deal!
It is, indeed, a certain grip ... but it is largely paid off! I know that for me the MM is both a great learning tool that creation.
There is an effort to provide the box but we give a hundredfold.
The manual is very well done, clear, and especially allows a learning curve from the simple (eg, audio input, an effect module and output) to things more complex modules vocoder or FM synthesis.

In my practice I find the editor more stable than XP on Mac (some bugs we learn to avoid (especially related to renaming the modules, at home, on mac crashes systematically editor) but a good overall performance on OSX 10.6)

That is the big argument MM. As it has been said in previous reviews: it sounds really good! A true digital sound especially powerful and truly versatile.

Of course, the GM has many restrictions (especially polyphony) but I think it is an object that requires a kind of critical approach. An attitude similar to that one can have against Max (even if the possibilities of MM are smaller of course). I must face the beast comes up with an idea in mind, a function, a journey that we want to inflict on her.

He serves primarily as a module improvisation in real time by exploiting this aspect (as Mark Harris fell) to combine in the same patch an IN / OUT with treatment (filters, distortion, compression) of the stream "live" with oscillators and noise generators etc.. I then uses a BCR2000 to control various parameters. So I can have on hand sounds very "raw" live oscilloscope but also a processing tool with filters etc..

This is the first module of the type I had.
I think in the abstract whether I could afford a G2, I will! Restrictions on the MM are real: the DSP is mainly home often stuck between 95 and 99%. (Which does not affect the operation of the synth: if you have enough DSP while traveling, if there is not enough, there is no sound).
That it requires two finishes

Also, since I use it as much as possible live, the fact that it is sometimes a bit monotimbral frustrating.
(For swing mode Duracell (https://www.youtube.com/watch?v=y3tMYTSImnY&feature=related)!!
But for the price paid (200 euros) at the time, I am more than satisfied!

Did you find this review helpful?yesno
»
Read the 10 user reviews on the Clavia Micro Modular »

Listen to the 12 audio files about Clavia Micro Modular »

View the 6 files about the Clavia Micro Modular »