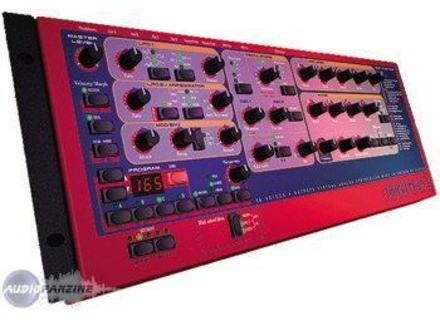 Clavia Nord Rack 2
5
I'm completely satisfied with it. I just don't like naming patches with numbers. a good LCD screen could make things better but it's OK.

It's easy to use if you've worked with synths before.I could put a LCD screen and the ability to name patches, then it would kick major ass. the manual is quite clear.It even includes an introduction to subtractive synthesis

The filters on this machine are superb, the sound quality it's great, and I could say you can make any kind of music with it,

Yes it's robust enough, I loose one of them, some moron dropped it from 4 feet and a knob twisted but it's functionin as it shoul I could say it's a tank. no no tach support.

I love it period.

Originally posted on FutureProducers.com
Posted by: Unknown ( 3-, 2003)
Did you find this review helpful?yesno
»

Shamk's review (This content has been automatically translated from French)

Clavia Nord Rack 2
5
Nord Rack v2 release in 1997, without a keyboard version of the Nord Lead 2, successor to the north of the rack first name ...

The edition is easy, and is controlled by Emagic soundivers ..

Of knobs everywhere! 25 in all, very good manifacture elsewhere!
The manual? you REALLY need the manual? It is well rdiger and clear, I can understand mine is ... in German (which I do not speak a word!) What wonderful!

The sound? Potato I tell you! That's one advantage of this synth is that it has the niak, the DSP is powerful, and very good algo ... The ITS has its NR2, that's why I chose!

By no effect against, think to add, it sounds empty if (missing a trick!)

It's been a year since I bought it 450? For mainly due to the trance, but it proves to be versatile and well goes everywhere, you just learn to use it well, for the only cons I repoche would make him this is the preset number of which is quite low!

To be in his synths!

Clavia Nord Rack 2
5
Look at the picture showing the bike and everything there is to know is there ... Except that it is steel, the knobs are indestructible (on mine that I bought used, so it was triturated the knobs for cutoff and reso that the paint is removed, but the knob itself not half a micron of game .. amazing!) and that food is a good old cable and not through a transformer. Class.

How many sounds, eh. As there are in your imagination, banana.

Special mention for the four trips via sound the same midi channel: it's the pads with a depth and complexity bluffing.

Configuration identical to a synthetic analog front all except some backup functions, MIDI, etc.. Simple and complex finger in the ear, a treat. Class, I tell you.

There is no built-in effects. Big deal. There is no on full of analos three times more expensive ... And frankly if he takes a little guts, he did not really need - it's a little hospital that could care less about the love that I have written since I do not use a sound add three delays without him ... Ah, if it has a kind of built-in effects: a button labeled "distortion" that I never use (the same kind as the effect of the same name on the MS2000, something loud and digital), and a button marked "unison" I often use (the same type as the chorus of the Juno II 106).

The sounds are really big right away, and BIG BOLD. We can blame this synth a certain lack of finesse but with a little time to tame it, he can do a very nice atmosphere too. And with the gain knob, you can do a little silence watts. Of course it's easier to do with low Teutonic Rammsteiniennes as the airy no less Teutonic way Tangerine Dream, but it's all about patience.

Imagine a Feurari be purchased (or almost the same color). You can not ask him to drive for you, you have to adapt and roll in 2nd and 80 at the time not to stall ...

I use it very intensively for several weeks and I repeat, this is the class. It has its place next to my MS2000 and it does not replace more than he analos I sold, but it has its own personality and it does not take place.

I had, I, I tested, etc.. lots of synths and if not a more analog than other VA is a real box with any ideas at hand.

Considering the price it is trading right now, it's really a great value for what is to repeat the choice ... we'll talk about next year