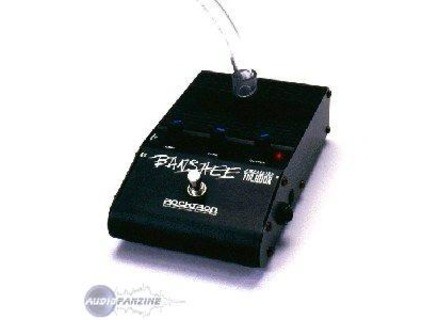 See all 11 classified ads about the Rocktron Banshee TalkBox »

The banshee is a talk box that provides the user with a "talking" sound made famous by such guitar players as Richie Sambora of Bon Jovi, Joe Perry of Aerosmith, and Peter Frampton among others. Setup is as easy as can be. If using this with your existing amp, you just plug your guitar into the guitar in jack of the banshee and then out to your guitar amplifier's input. That's it. Once you step on the on/off switch, the banshee will bypass your amp and use it's own built in amplifier to produce sound.

You will need to run the tube up a mic stand and attach the tube to the end of a microphone that is amplified. Hit a note or chord on your guitar while placing the tube into the side of your mouth. The sound of the guitar will travel up the tube and into your mouth. moving your mouth around will alter the sound as it's picked up by the microphone. Really cool! This is the type of guitar gear that will keep you engaged and interested for awhile as you mess around with it.

The reason I have this unit is because I play in a Bon Jovi tribute band so this is required. I've used the Heil talkbox before buying a banshee. The Heil was good but it kept blowing it's own fuse, causing me to replace it 3 times. It also can damage your amp if not used correctly. These were enough reasons for me to try the banshee.

To be honest, there wasn't much sound difference between the two to my ears. I never tried them back to back but the banshee provides a very authentic sounding, throaty talkbox effect. If you take the tube out of the tube connector on the unit you can even use it as a simple 5 watt distorted amp!

If I needed to, I would buy another one of these again in a hearbeat. It's made my gigging life so much easier, it mounts to my pedalboard and it goes to every show with me. The people in the audience really don't care if you're using a banshee, a heil or even the Framptone model. All they care about is having fun a the band sounding good. The Rocktron Banshee delivers on all of the above and more. Blast into Bon Jovi's Livin' On A Prayer or It's My Life and watch the reaction you will get from the audience. It's pure rock'n'roll and works every time!
Did you find this review helpful?yesno
»

Beware if you are like me, "keyboardist used in homes and VSTs studio" ... This is not an effect like the others.

This is an amp, a transducer horn and a pipe that is square in the mouth. Resonances of the mouth are used to modulate the sound ... and you need a microphone to pick them up.

Attention too, if you have a girlfriend and you want to keep ... do not abuse the talkbox in his presence ... I feel that the experiments drunk fairly quickly involuntary listeners.

When the level rises, there is the breath, the sound is distorted and saturated .. and this is NORMAL.

So, because of the distortion, forget harmonies (or it will make several mono plugs to keep a clear sound).

To vocalize harmonies, rather I will use a vocoder or a pitch shifter / hormoniseur / autotune.

On the synth, I choose a simple waveform in monaural with a single tilt (or oscilloscope synchronized) no effect (no reverb or delay phaser) on the other hand, I play on the vibrato portamento and pitch (it emphasizes the resonances mouth): D ... I use it for two days with my micro modular Clavia ... these two belong together!

If you use a sound with reverb / delay or doubling oscillators sound becomes rotten ... it can be funny 5 minutes but ... why buy a much distortion.

Simple to implement, an ultra sound characteristic that can not really approach it with a vocoder

6 of 9 people found this review helpful

A preamp is built into the Banshee which allows the guitar to plug directly in between the Banshee.

C is a very simple set up, the manual is clear on his guitar in wall form in, and we go out live on the amp or preamp. For my part j uses PODXT as preamp and direct console, either a preamp or amp it makes no diference, puisqe the Banshee is preamplified and connetc between the guitar and your amp or preamp.

I am the guitarist and the utitilisation Benshee will only be used with guitar, c D elsewhere is done to the base ca. The sound is just wonderful, amazing, a cry, easy to use but requires a little adaptation all the same. The sound is funky, there's no local pictures yesterday everyone was crying with joy so this gadget is useful to us in our training funk, let s groove became EWF's madness! C is monstrous this thing, I think I have never been so pleasantly surprised by an effect since I jou (long). C is the tool that I missed not know how I did it for j live without nan lol I'm serious. Less powerful than a branch of a Heil body double 100 watt, but the sound quality is as good and at least it s not hard teeth. Purists prefer the Heil for its power dependence of a body double, I understand ... but personally there is no contest for me c is the Banshee and nothing else.

The Talk Box is a gadget, far from being useful to all c is Kler, but for my part I'm really happy with my purchase, c is a pricey gadget 182 because few current, to my knowledge there are only three models of the Banshee talkbox, the Heil and Danelectro. I remake that choice c is not eSite Kler and clear.

dj psik's review (This content has been automatically translated from French)

No sound quality is not great but it's going good anyway. (Ac synthesizer)

C is the bomb ball I come from the holding tank aprem and I am satisfied with serious. j I'd even make a talk box (home made) but it was worth not banshee preamp which suits well the thing at matos.ont said that truth is the heil DUNLOP 100 watts but the preamps of the banshee 5Watt is sufficient. short I really regret not buying my pricey 200 euros but I'm glad to have the find.

Did you find this review helpful?yesno
»
Read the 10 user reviews on the Rocktron Banshee TalkBox »