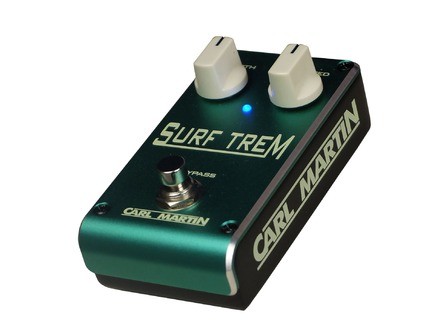 Carl Martin Surf Trem 2018
5
SOUND:
Below is a YouTube demonstration video on the Carl Martin Surf Vibe 2018, which is the latest ‘scaled down’ or streamlined pedal board version of this classic.

The Surf Trem is as simple as it gets… only two knobs, DEPTH and SPEED, which vintage sound allows you to mimic the tremolo circuit found in vintage Fender and Ampeg amplifiers. The sounds possible with this pedal are quite expansive and enjoyable to implement in one’s playing and is not so straight forward as simply a Surf music device. For example, by using a lot of Depth and moderate Speed you can get that eerie Pink Floyd quality. Or decreasing the Depth and increasing the Speed works well for faster rhythm and lead work, reminiscent of that Surf sound. However, maximizing both Depth and Speed produces an incredibly fast pulse that can add an extra dimension and thickness to power chords and Metal lead playing.

OVERALL IMPRESSION:
What I like about Carl Martin is that the company produces highly useable pedals that range from classic to modern. There are few bells and whistles with Carl Martin gear, but what you get is what the pedal suggests in the highest quality. If you want a quality delay or overdrive, then Carl Martin can deliver, with the Surf Trem being no different. Pure analog, the Surf Trem produces incredibly clear and beautiful sounding tremolo that truly is like the vintage amps of yester-year (which is why this pedal is found under the ‘Vintage Series’ section on the Carl Martin website).

Because the Surf Trem produces such wide sweeping effect it is indispensable for spacey Prog compositions and long drawn out chords. Add a bit of reverb or echo to it and it sounds simply fantastic. However, one cannot avoid throwing in a bit of Surf music for the sheer fun of it. But what I like most is that you can have just a little or a lot of Speed while dialing back the Depth, so that you get a hint of effect with your dry tone, which produces even more variations of effect.

EASE OF USE:
You can’t go wrong with only two knobs, although you still will have plenty of tweaking to do because of the wide array of tonal possibilities. Anything below 12 o’clock on the Speed knob has a wave-like effect to something that sounds slightly swirling. Once you get around the 2 o’clock range on the Speed knob you begin getting that familiar pulsating sound. Around 3 o’clock and almost all the way (95%) produces a Surf type effect at different rates (moderately fast to very fast tremolo). All the way must be around 220 bpm and sounds like a super fast stuttering.

The Depth knob is simply the ‘mix’ of the tremolo effect. This is the control that makes the Surf Trem so expressive. You can have a high level of Speed and still barely notice it in the mix when the Depth is turned down, which means adding in some dimension and quality into a guitar’s tone without it being overwhelming. And so, because a higher Depth means a more pronounced effect, it’s interesting to note that when you use a very slow Speed, for that spacey sound, you can play at a moderate speed if the Depth is down; but if you increase the Depth then a very slow Speed necessitate a slower speed of playing (otherwise, you miss out on some notes since a tremolo effect means altering loud with SOFT). If this isn’t clear, refer to the Demo video above – you can hear how I had to slow down my playing to use a slow Speed setting to its best effect and as the Depth increased.

RELIABILITY & DURABILITY:
This is the 2018 version of the Surf Trem, designed in the same manner as the newly and recently released DC Drive 2018. It comes in two-tone anodized die cast housing – black along the sides (with the Carl Martin name) and a groovy surf green metallic top. The switches and knobs are typical, comprised of both metal and plastic. The Surf Trem has a metal foot switch (for on and off) and plastic turning knobs for Depth and Speed – all of which are solid in construction. The foot switch is not close to the plastic knobs, and so it is unlikely there would be any stomping mishaps that would crack the Depth and Speed knobs. The standard 9v 50mA power input is located at the back, which means less chance of a power cord mishap (twisting or bending of the input). Likewise the cable input and output are located in the back, which I tend to prefer (out of harm’s way, but it also allows you to pack in more pedals on a pedal board) and which Carl Martin has been doing with their latest pedal releases (smart move!). As a final note, you cannot use batteries with the Surf Trem – a typical 9v power source/adapter must be used.
Did you find this review helpful?yesno
»