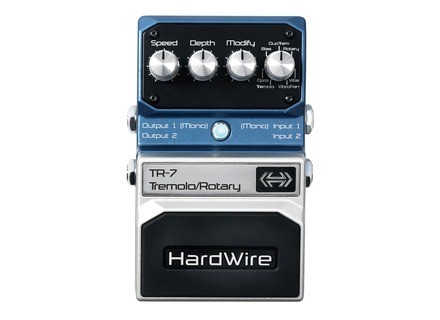 when turned one should choose the desired type of modulation,
-TREMOLO: Effect elementary amplitude modulation.
OPTO-TREMOLO: Tremolo based on a single optical circuit used on FENDER amplifiers.
BIAS-TREMOLO: Tremolo based on the change of polarization of output tubes used on VOX amplifiers.
TREM-DUO: Double tremolos connected in series.
ROTARY: Simulates the legendary Leslie
-VIBE: Famous uni-vibe sound effect with chorus and vibrato.
-VibroPan: Single Effect doubles vibrato.
Then we must act on the various knobs settings.
SPEED: Sets the speed
DEHP: determine the intensity of the effect or after the selected depth effect
MODIFY: change some parameters according to the selected effect, either (the waveform, tone, chorus / vibrato, the phase velocity of the second tremolo)

TAP TEMPO: This function is now available in the footswitch down for three secondes.elle adjusts in real time on stage the modulation speed of the tremolo.

you still need to take a look from time to time on the leaflet which is very easy to use elsewhere.
that is downloaded from the HARDWIRE site, in addition to the paper version comes with the pedal. and it is convenient for me I made a small table with all drawn buttons and I can notice me at any time the settings I found because of course, this model pedal it is not possible to save these settings as a multi-effects.

At first I used a battery, but I quickly became disillusioned at the speed or the one that void.
so I used a standard boss power grid to that one (I do not know why by the way) and then I finally bought the manufacturer's recommended diet.

this is really a very good pedal, true bypass completely transparent. not breathing.
the sound is a treat grain is beautiful, you can feel the change immediately when you turn the knobs notched.
of course I do not use any effects, I experience as and. it is quite difficult to describe his feelings about the sound quality, rather watch on Youtube (not the name) demos of this pedal the reflects.
I use it with a stratovolcano, a Ibanez am70 ON AMP fender Course 100 and an acoustic amp swr with IBANEZ AF125NT
By the time I added a 90 foot stage and it runs for hours of solo hovering a wish (lol)

I use it now for a little over a year.
. I did not try other model before I buy myself proud to video demos on the Internet and then I found it in a shop near my music, by trying it m ' was on, I did not even want to try the other.
I love this pedal, if it was a choice I would do again.

The price seems right given the number of function that makes the pedal,

the catch is that you think about buying food at the same time as the pedal and provide its budget, has seen the speed or the empty batteries.

Published on 06/26/10
HardWire is introducing the new TR-7 Tremolo/Rotary Pedal at the 2010 Summer NAMM Show in Nashville, Tennessee.