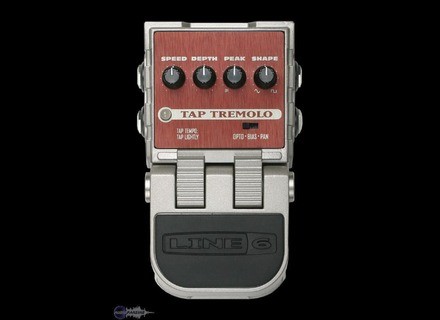 All user reviews for the Line 6 Tap tremolo

Line 6 Tap tremolo
4
The Line 6 Tap Tremolo is a guitar pedal that's no longer being made. It's a digital pedal that gives you the chance to, as the name clearly states, actually tap out the speed you'd like the tremolo to run at. The pedal is not rack mountable since it's a foot pedal, and has stereo 1/4" inputs and outputs as well as the ability to power it with either a nine volt battery or power supply.

The configuration of the parameters found on the Line 6 Tap Tremolo pedal are pretty straight forward, as it's got knobs for speed, depth, peak, and shape, as well as a switch for three different modes. These modes include opto, bias, and pan modes. Of course there's also the option for tapping the speed of the tremolo, but that's it so I don't think a manual is necessary.

The sound of the Line 6 Tap Tremolo is in my opinion, a bit above average but nothing more. It's a good sound and it's really cool that you can tap it out, but it doesn't come off as a warm sounding pedal, which is normally what I'm looking for. It is however a pretty versatile pedal as it's possible to get a nice collection of sounds between the three different modes. It's also cool that it has stereo and inputs and outputs for panning and what not.

Even though they're no longer making the Line 6 Tap Tremolo, you can definitely still find them used if you want one since they weren't stopped being made too long ago. While not the most overall realistic sounding tremolo pedal out there, if you're after a bunch of tremolo sounds in one place, this is a good place to start. So while it's flexible, if you're after a top tier sound, this probably isn't going to be it. Having said this, it's still a good deal for the price and should be checked out for anyone interested in an inexpensive but versatile tremolo pedal.
Did you find this review helpful?yesno

Once connected, you must choose what is done:
- Circuit (type = Opto vintage, modern or Bias = Pan = alternating left / right, Stereo) to the grain of the sound.
- And then Eternal speed (Speed), effect depth (Depth) and waveform (Shape of sinusodale rectangular)
Then, a plot thickens: namely with the knob Peak (sensitivity), the speed of the effect is governed by the attack on each note. Or you use the tap tempo, by tapping the rhythm on the pedals.
Everything is pretty simple, but requires, even when the user manual, just the very first time, for those not used to this kind of effects (including priori Tap -Tempo / on the Peak / RULES on speed manual)

SETTING THE Regrettably a Level (as full of Tremola)

A small LED will flash all the time:
in OFF (orange): it indicates the tempo of the effect, so we can speed rgler in silence and no surprises the Inrush.
ON (green): same (useful to see that the Tap-Tempo works for real)
When it turns red, change the battery!

To beginners, I had a small problem of breath. But in fact, my silent PSU a bit too powerful.
Then, with batteries: no problem BUT a stack rpt '...
So power supply requires it, not too strong (like a Boss or Ibanez line6 or Korg or with other pedals in parallle).

The grain is warm enough at all numrique. But the effect is not complete transparent: the sound is compressed engagement. To me, this is not serious trs, but we know so unlike what I had described prcdemment: no loss of sound level, on the contrary a few blows + sagrable depending on the other end, the power supply, guitar etc ... I saw two more rlgages: noise gate and level!
The rglages are all the same effective trs.
The range of possible speeds is great, we'll atmosphriques effects (with modulations that go) to the jackhammer sound of many aggressive.

I Nol since 2005 and APRS have struggled with the history of steam and industrial consumption of 9v batteries, I love the pedals (power supply "zero hum" of Danelectro).
I sometimes use the tremolo on my multi (Korg AX1G, basic), I tried a digitech, Boss. Well, frankly, my prfr a silent tremolo Mount SERIES on an old Fender amp ...
Sometimes I am bored to install the pedals (concerts in tiny bays shabby, and weight when consquent lugs around a lot of pedals ...)

So:
- I: the rglages effective, robust, I / O stro, Tap Tempo and the Peak.
- I dislike: electric consumption, breath sometimes, the weight (but strong forces), the small LED that blinks all the time. can a Nerve (especially when it turns red!).

The report qualitprix seems to me correct (new 110 euros), especially compared to most other brands rputes. I would do this choice? Yes, and I think even I would take the carrment Line6 MM4 of (the big blue thing) ...