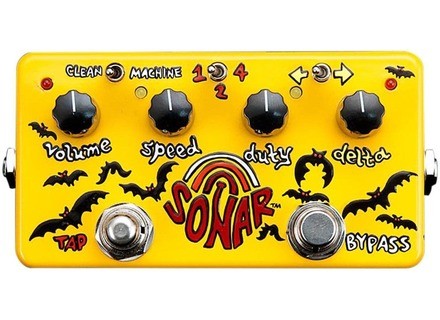 View all offers for Zvex Sonar »

JLDavid's review (This content has been automatically translated from French)" Excellent tremolo, but ..."

This tremolo has several unique features. First, and most importantly, the sculpt itself the waveform "trémolera" the attack, release and depth can be adjusted using the three knobs on the right while holding the switch left, the LED flash then more or less rapidly to indicate the setting. Not very practical as a laborer, especially if one wants to change often - which is tempting because the results are spectacular, especially the tremolo may extend over a period of up to four seconds!
The primary function of knob Duty is to flatten the peak of the tremolo - or rather to maintain the highest. Adjust the contrast, somehow.
You can also double or quadruple the speed of the tremolo, but only if it is determined it using the switch "tap". (And we wonder why).
There are also a few mini-switch called "" Machine "which, as its name suggests, reproduced distortion pedal of the same name from the same manufacturer. I found it irrelevant, but it seems that it allows to better hear the tremolo when it passes by another distortion. admit.
Another feat is called "Delta" function: it is a set of acceleration or deceleration of the tremolo or her "duty" function, or both. We made this choice with a mini-switch, and it adjusts the degree of acceleration or deceleration with the Delta button. You must press the Bypass switch to turn the process over again, if we can not stop it, except by operating the mini switch in hand of course. This is not very convenient in fact, and even if it is a tour de force, I think this function is practically useless. It must hold against a lot of room in the electronics (and the price ...) and she also takes up too much on the front of the pedal, which is already very small package. It would be welcome to replace it with a faster and more user-friendly to the most interesting features of the tremolo, those described in the first access.
The casing is very robust, it comprises an input and an output (no external controls are possible), it is supplied by a 9 V battery or an adapter. The sound quality is excellent, but this lack of clarity in handling settings, this lack of usability I decided - despite all its qualities - not to keep and turn to other brands.