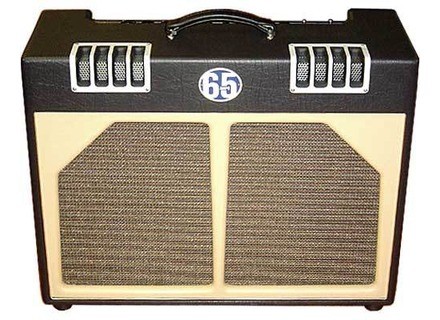 65amps London 112 Combo
4
The London is 18 watts and powered by a pair EL-84's and rectified by an EZ-81 tube. It comes in several speaker sizes (mine is a 2x12 combo), and features a Celestion "Alnico Blue" and a Celestion "G-12H Anniversary." It has two channels. The first is the "Color Channel" which runs off and EF-86 tube, has two inputs (high and low), and has controls for Volume, Tone, and Color as well as a boost switch. The second channel runs on 12ax7 tubes and features high and low inputs, controls for Volume and Tone, and controls marked Intensity and Speed for tremelo. The tremelo is tube so when hit with a hard signal it "Chokes," giving it a very natural feel. The London also has a Cut control that works with both channels. The London is extremely versatile. It will suit practically any genre from Jazz to Country to any kind of Rock you can throw at it. However, if you're a thrash guy, this might not be the amp for you. I have used this amp in many places that range from small clubs/churches to bigger stages as well as in the studio. It has performed flawlessly in EVERY situation it has been in. 18 watts might not sound like enough but go and play this amp and it will change your mind. This thing has authority! I give it a 9 only because of the fact it does not cover metal territory. (Which was far from the goal with this amp.)

I've owned this guy for about 6 months now and haven't had a problem yet. I have no opinion on the rating because I don;t feel I've had it long enough to have any problems. That said, these amps are built like tanks and have lifetime warranties. I never use a backup and the tubes (which are JJ) have held up great. They hand select their tubes by the way.

This amp is the best sounding amp I have ever played! And I've played a ton of amps. I've used it with humbuckers, single coils, P-90's, every old DeArmond pups... every guitar I've ever played through this amp sounds amazing. The other thing I love is how well this amp retains the sound of your guitar. For example: Strats sound like strats... Teles like teles... Les Pauls like Les Pauls... and so on and so forth. I play many styles of music ranging from jazz to rock and it sounds great with every genre. It's always dead quiet on stage does exactly what I want it to when I want it to. The sounds this amp produces are predominantly more Vox-ish and Marshall like. However, it does touch on some great Fender and Matchless tones as well. Being that it is only 18 watts it does not have a ton of headroom but it has quite enough for me. this amp takes pedals better than any amp I have played. Even amps with 5 figure price tags! The pulls out the true sound of your pedals yet stays intact every step of the way. Also, being that it does not have an Fx-Loop, you have to run your delays out front of the amp. Some might have a problem with this but I think they sound great! Even better than others i have heard in Fx-loops. They do not get muddy at all.

In overall I give it an 8. It doesn't do metal and some might not find the headroom they are looking for but none the less, it is truly a remarkable amp. I chose this amp for several reasons. 1) It sounds better than any other amp i could get my hands on. And I had my hands on quite a few. Almost went with a /13 but after a side-by-side comparison, the /13 sounded quite thin and lacked the authority that the London offers. 2) It handles pedals extremely well. I love pedals so it was very important to have an amp that maintained it's tone even with pedals in front of it. 3) Holy hell, have you seen them?

65amps London 112 Combo
5
This is a really solid tube combo amplifier. It has two channels, which are both based on classic amp models. It has a surprisingly low wattage (18) but it still rips. There is only a single 1/4" input. There are tone controls for both channels, as well as a "cut" knob that works on both. Each channel has its own volume control, and there is also a separate one for master volume.

Getting a good sound is as easy as owning a good guitar. Like most amps, this is as good as the player and the guitar he's using. It has an insane range of tones, ranging from smooth, clean jazz to slightly overdriven blues to really overdriven southern rock to full on ripping rock glory. The manual will explain how to set this amp rather clearly and also offers some ideas on amp settings which may help steer people in the right direction (though I think there are far better settings than the ones given in the manual).

The sounds that I can get out of this thing are phenomenal. I use a Stratocaster most of the time (I'm really picky) but I've had good luck with just about every kind of guitar I own. Even acoustics sound okay! But the amp is versatile enough to be able to play in any style with humbuckers, single-coils, hollow or solid bodies. The aforementioned genres are all easily attainable. Post-Zeppelin heavy metal is probably not possible, but that's not really a genre I'm interested in anyway. And in reality, with the right pedal combinations, those genres do actually become possible. I think I would probably choose this amp over the Fender Twin assuming I didn't have any pedals. The clean tones actually remind me of the Vox AC15 or AC30 models, which are phenomenal. The dirty channel is standard Marshall derivative, not quite the same as the Marshall tone but not necessarily inferior (it's more a matter of taste, really). This thing is perfect for somebody who doesn't mind using amp distortion and would rather not buy a ton of pedals (even though that's probably the way I would ultimately choose to go).

This is a very well made, well crafted amp. I would have to say that most of the sounds, if not all, are at least good if not great. This thing isn't particularly expensive, so it's a great deal. I would highly recommend this to somebody looking for a versatile amp, who doesn't own an army of fuzz/distortion/overdrive pedals.
Did you find this review helpful?yesno
»