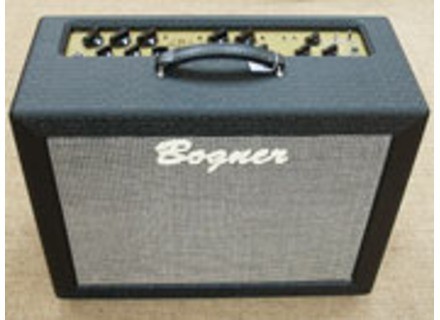 Bogner Goldfinger 1x12 combo
5
The goldfinger is a 2 channel, 6v6 based monster. The amp features both a pre and post effects loops, onboard reverb, pre/post bright switches for the loud 69 channel, and a foot switchable boost. The tolex is exclusive to bogner and features a beautiful swirled pattern in black.

It is hard to setup the goldfinger for anything but a great tone. The tone controls are very responsive and the Gain EQ knob allows you to sweep between brittle vintage flavors and aggressive modern gain sounds. The foot switchable boost allows the amp to function essentially as a three channel amp.

played through a 90's Gibson Les Paul Standard. No pedals.

The clean sounds from the Alpha channel are by far the best I've heard in a Bogner amplifier. The onboard reverb is as gorgeous as they come and I felt inclined to leave it engaged almost permanently. The Omega channel can be switched between both Loud 69 mode and 80's mode, both are capable of a variety of sounds but with subtle differences. Using the Gain EQ knob I was able to coax high gain sounds out of the amp the were very similar to the Bogner ecstasy's red channel. Adjusting it for a darker , smoother tone and rolling back the gain slightly allowed for tones that I felt were superior to the Ecstasy's legendary blue channel.

The Bogner Goldfinger strongly impressed me. The sounds available and the feature set are only rivaled currently by the Mesa Boogie Royal Atlantic. With cleans superior to the Metropolis and Shiva models, and gain that could easily compare to the venerable 101b-- The Goldfinger is , aside from metal styles (Uberschall territory), dominating the Bogner line up for versatility and value for money. I highly recommend trying it out if you get the chance.
Did you find this review helpful?yesno
»