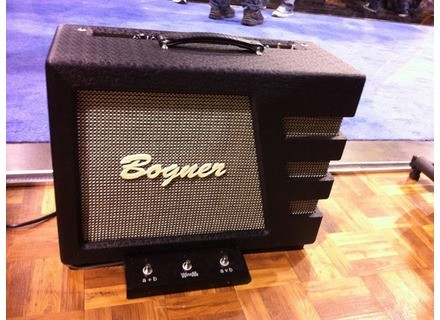 Bogner Mephisto
4
The Bogner Mephisto is a very unique offering from the brand. The amp is essentialy a 2-in-1 sort of deal. You get two separate pre/poweramp configurations that Bogner claims to cover the essential 50's american and 60's british sounds. On one side you get the american flavor of ECC83's in the preamp and 6v6's running the output. On the other side, 12ax7s' couple with el84's to get classic british gain sounds. You are able to not only run the amps independently but also are given the option to combine them to create a 12,18, or 20 watt selection. The amp has no onboard reverb and no loop but makes up for this with a foot switchable power attenuator. The aesthetics of the Mephisto are one-of-a kind and quite striking.

The options presented with this combo are very interesting. You can combine the amps in different configurations to yield common and no-so-common results. The inclusion of a foot switchable attenuator adds to the versatility, allowing you to control volumes and drive the power sections either separately both together. The 3 way bright switch on the british preamp is very handy for using a large arsenal of guitars.

I played through the Bogner Mephisto with a Gibson Tweedy SG and a early 90's Les Paul studio in alpine white. I ran a strymon bluesky and el capistan out front.

The amp covers alot of ground and manages to accurately depict both british and classic american stylings. Cleans sounded full bodied and full of chime. With the aid of the bluesky reverberator, I was able to get very beautiful soundscapes with a subtle shimmer. The gain sounds are very classic sounding and lead lines are very fluid with the amp. Combining the amps together yielded something not so surprisingly pleasant. Bogner outdid himself with this amp.

I feel that the Bogner Mephisto is a producer's dream. You get fender and vox flavors in one package and it's the real deal. To the average consumer, the Mephisto is simply too expensive, and will likely not be considered as a viable amplifier solution. There really is no competition to speak of. The options you're given are nearly exclusive to this amp. Did I mention it looks beautiful?
Did you find this review helpful?yesno
»