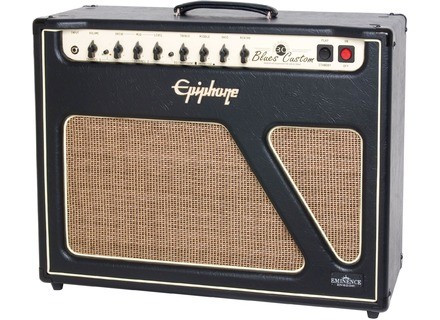 Epiphone Blues Custom
5
All tube amp 30w/15w (pentode / triode) very useful to keep his cool even by decreasing the power, the amp also has an active EQ that boosts connectivity not mal.En not much except the footswitch jack and Loudspeaker output in five different inpédances (4/8/16 ohms), one used for speakers of the amp, the front there is just "input".

Configuration is very simple, a little fiddling rapidly obtained a sound workable, some examples are available on the manual. A manual is not really useful for this type of amp.

This amp suits my style blues/rock/70, I rarely use tes the drive channel of the amp that I find a bit light, I prefer a TK999 in the clean channel I get the sound I love in this way. I over cheeks with a Baja Telecaster, Gibson ES335 and a Clapton Strat on which I replaced by noiseless gold lace sensor Strat is with my favorite, although other guitars sound great on this amp.

I use this amp for about 1 year, the only complaint one can make to this amp is its weight (31kg), I have, and I have tried other amps, but the price at which the store m ' proposed the amp defies concurance therefore I judge the quality / price more than excellent, € 250 30Wtout a new lamp warranty in store, I would do this choice without hesitation.

spird's review (This content has been automatically translated from French)

The configuration could not be simpler, there is no need to book.
A button on the back of the amp can go from 15 watts to 30 watts class A to class A / B.
On the front it has 2 channels, the first for the second for its light crunch sound (its both channels are switchable via a pedal optional). Complment In its two channels found an equalizer to boost the frequencies and to conclude a rverbe.

This is an amp Designed to play mostly blues and rock, for my part I'm in heaven the sound is very fat, combined with a stratocaster or a washburn x50pro's great!
This is an amp all the lights and believe me it sounds hard, trs fort.
Channel 2 provides access to a more crunch and go tickle the ACDC del but it is better to associate a good distortion pedals of.

I play on the custom prs for one year and I can not get enough.
These features I prfre are: sound, simplicity of use and price.
The less body weight.
You do again this choice: YES.

tomasalom1's review (This content has been automatically translated from French)

Epiphone Blues Custom
5
1 GZ34 (5AR4) for recovery, 2 12 AX7 for clear channel (operating in class A) and March 12 AX7 for channel saturated (still in Class A) and two 6L6 Class A or B to power.
30 W and 15 W Class B Class A
hp outputs 4, 8 and 16 ohm (two for each except for the 16 ohm)
input to change channels and / or cut the reverb (need to keep a stereo reverb, which also is pretty bad!)
equalizer settings are the strengths of this amp. There is either a normal low medium setting with acute influence of a portion of another like a conventional amp or without influence of a range of one another, resulting in a multitude of possible settings depending on the guitar which can have too much or not enough shine.

The configuration is simple but not simplistic: it is necessary to adjust the equalizer using the clean channel (it is common to both channels) and can be refined for the channel saturated (we say support rather crunch!) By providing in addition to a Mid control is fairly well located and centered on a frequency more than appropriate (though seen it!)
the manual is hopelessly and sadly monoglot English ...
but it explains well the thingy.
firmly, the reverb is just as marketing argument: it is zero! or we do not notice or it crushes everything. But it did not matter much where it's not expected this kind of amp!

For rock and blues .... quite suitable for this amp hard to promote the sound of the guitar will not be indicated for those famous hollow sound that make the guitars so interchangeable!
I tried it with and lespaul stratosonic stratocaster yamaha sg 2000. it sounds wonderful with the possible range equalizer: that is the strong point ... but also the weak point because it is impossible to change a guitar without a bit of time before the pretty buttons on the EQ .... and even more: the strato accommodating more of a power part in class B type marshall even though it is far from the British Standard (6L6 are the explanation!)

The clean channel is simply extraordinary crunch (all colors are possible regardless of the guitar used. He single-handedly justifies the purchase of the amp: the channel is saturated much anecdotal him (say it really is down compared to its counterpart bright / crunch: in fact, he seems to lack "seat" but instead allows good "crack" the mix in group play which is what we ask !) but the existence of this channel allows not only to have his solo, but also the level that you want, that does not add a pedal on the clean channel but the sound is most convincing (and even enjoyable if he added a tube screamer, which I do not deprive me!)
value for money is amazing!
The biggest problem is the weight of this amp (31 kg, excuse the little!) default so crippling that I had to separate the head of the cabinet in order to make this portable amp: 7 euros and fifty cents for wood a box for the chassis seem quite essential to make this amp mobile!
this amp is the nth of a saga, but it really has nothing to be ashamed of his predecessors such as Vox AC 30 (Chinese head: the English were not at that time in my ways!) and H K edition tube, marshall 2061x, matchless lightning 15, Orange Tiny Terror etc ...
On the contrary, I would say that it can renew the genre with its EQ section "special" and his choice of party power that actually changes the color of sound, that is not that of the tiny terror or Blackheart 3 / 5 w to name them.
For accuracy in search of her, you should know that the power in class A makes the sound darker and more closed and therefore closer to the orange (or even at a lower proportion matchless seen that they have much less dark this component! )
Apart from this turpitude related to the separation head body, yes I would do everything without hesitation. Especially since I got this amp through an exchange with the tube hK edition (which on paper is more expensive) with a scratch that was really the trouble with the weight of this amp (in this respect for the fragile Lumbar: The edition tube weighs only 18 kg with the package well packed: I hold the post! but unfortunately it has a hp!) but was not frightened by the idea of ​​the tube but "sibling" of the H and K which has its aficionados and critics .... I'm not but I was a little tired of the cold on the sound of h and k.

Gtisa's review (This content has been automatically translated from French)

Epiphone Blues Custom
5
All-tube amp MADE IN CHINA (like many others ...)
15/30W with a switch to select
Output hp suplmantaires
rglages usual with the tone common to the clean channel and drive (the drive has more of a tone medium), a switch to make the active Tone (the sound is quite a boost) that n Requires adjust its rglages and rverbe a "vintage" a lamp which makes it a little intrusive and less transparent than a Fender, for example.
It is equipped with 2 "12" Eminence "is on mesure.Cet amp t Labor by Gibson (they seem proud of is labeled on the amp and rpt 2 times the owner's manual)

Easy to use except that beginners are groping around with the Tone moreover trs trs effective and influential on the sound.
The sound is good with a trs Preferences position 30w Class A / B that makes it more "bright" while the more crystalline position 15W Class A longer plays in the style of jazz / blues sound with s more vintage.
The manual is adequate with some examples of rglages ...

It suits me perfectly I'm playing in a record 60/70
I use it with a GIBSON MELODY MAKER, a Gibson BFG, a SQUIER 51, and a copy of strat TRAINING SERIES JACKET 80s and scratches with any amp sounds MAGISTRAL! I recall that this amp COST about 400euros in VPC ...
However it requires to operate "in the towers" to avoid falling into sound fades.Les 2 hp distill out the sound and power Anyway it is excellent in its range of prix.Je adds an overdrive or MAXON OD808 BOSS BLUES DRIVER one on the clean channel because it is in this configuration I do prfre "sing" and I added a delay for ECHO ELECTRO HARMONIX least one use the reverb as I adjust to a minimum.

I use it for 6 months and I did not find a major default if used for which he does labor.
I had a silent trs LANEY VC30/112 that good but difficult to use in an apartment then EPIPHONE VALVE JUNIOR and enjoyable as I trs t surprised by the quality overall, I am pass the "big ERRF" range because I had a good OCCAZ. to do
The ratio quality price is excellent the quality of matrial and sounds make it a good amp trs but difficult to find and try to shop that's why I wrote this comment Finally ... I do not regret my purchase!

Did you find this review helpful?yesno
»
Read the 6 user reviews on the Epiphone Blues Custom »