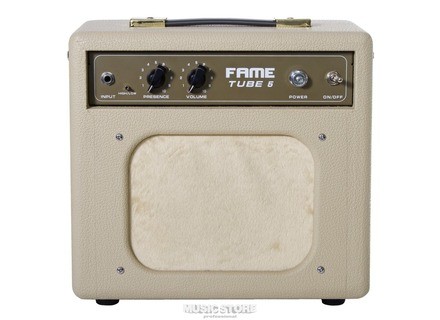 vinic's review (This content has been automatically translated from French)" Gift it!"

I will not go into details, frankly, it sounds great, especially for the price!

Just crunch which is a bit "slimy" and lack of finesse to my taste ... I'll see if I can do something.

The Presence control is made a simple treble filter, placed just before attacking the 6V6.

This is where it gets really interesting ...

I hesitated to get me a Fender Champion 600 secondhand (for longer manufactured) and I fell on the Fame. The fender was provided with any Chinese lamp and HP ilk ... Here at least we have 2 basic mods already done! And I say that anyway, all these little amps (Harley Benton GA-5 also for example) are all alike in terms of the scheme and only a few resistor values ​​/ condo change here and there ...

I do not think so right, the components on the Fame even have the same names (indices) that the scheme Fender! Components are roughly speaking the same place ... In short, it's copy and paste. I think it is the Chinese who made the 600 field that has continued to prod a Fame, with a few mods anyway:
- Inter High / Low for entry rather than 2 inputs (not stupid!)
- Tonestack different "fixed" digs a little lower and treble boost, but ...
- Added presence control that cuts the treble (so we found it with this setting in the middle)
- C6 = 220μF 22μF 450V instead of the Fender (hallelujah, finally a condo PSU properly sized factory!)
- Added a 100nF on the cathode of the 6V6

NB:
- 20090209 PCB
- Most condos are CBB22 (MKP) so same as the Orange Drop. After this is perhaps not top quality but it's still very well already!
- The transformers are quite honorable judged solely on their size
- Double sided PCB so tinkering without much risk of tearing tracks ...

Some basic mods to optimize, including reducing the buzz:
- Twist the son of HT and 6.3 V, including jumpers between the two tubes and also the power supply of the lamp voltage
- Separate inter-son maps the output transformer son which are connected by a Rilsan ...
- R11 (C10 and R7 according to taste) https://www.forum-guitare.fr/modifications-fender-champion-600-bias-cr-et-gain-t23465.html