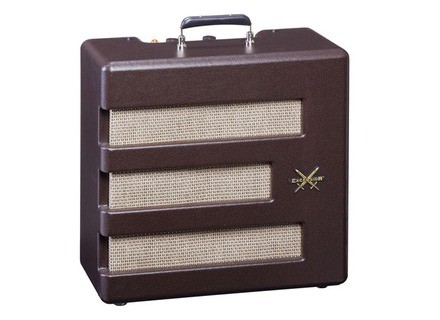 I did two mods to get it to perfection as I see it. I changed all the Chinese fizz-bottles with: JJ 6V6s for the power end, a vintage RCA 7025 for V1 and a JJ ecc83s for the vibrato slot ( V2 ). The amp actually sounded pretty darn good out of the box but the JJ 6V6s and the 7025 really got it smoothed out. The vibrato was barely audible with the Chinese 12ax7 in V2 but it really started to come lively with the JJ. The second mod was a 500K potentiometer to replace the bright/dark switch. "Bright" was too bright, "Dark" was too dark. The pot basically pans between the two extremes, my general-purpose setting is halfway, 5 on the pot.

I've got a G&L Legacy, a G&L ASAT, a '74 Les Paul Standard and a couple of pretty wonky no-name guitars and I can get just about any sound I'm looking for out of this baby. It's a player's amp, not a knob-tweaker's amp. Turn it up, it gets dirty, turn it down, it gets clean. Turn up the guitar volume, it gets dirty, turn down the guitar and it cleans up BEAUTIFULLY. Turn on the vibrato and play some country licks, you're there. Jazz? Turn down the tone pot ( which you WILL install, it's dead easy ) to it's darkest setting, hit the neck pickup, adjust the guitar's tone knob to taste and you're there. Rock? Get some dirt and let it fly. Weird honky twang-thang sounds? Hit the accordion input, get the vibrato warbling, adjust your guitar's volume and tone controls to dumb settings and you're just plain retro hi-fi alien. Clean, dirty, skinny, fat, it's all there. It's just one spunky little amp that's a blast to play.

"Little" is not a good word 'cause it's also pretty loud, I would say small gig territory.

This amp is VERY responsive to what you put in it, dynamics, gain, tone controls on the guitar, etc.

Ok, so it's not for metal-style sounds, but that's kind of a no-brainer, huh?

I love this amp. I think the two tweaks I performed on mine are pretty well necessary. My only outlay after the initial purchase of the amp was the pair of JJ 6V6s. I had the JJ ecc83s and the RCA 7025 sitting in a drawer as well as the tone pot. About 2-3 hours of work and I was good to go.

Value for the money, you bet, I'd do it again in a second.

I've joined a photo of my tone pot mod. That's a Strat Volume knob, by the way.

Here's the horrible, shameful truth. I like it better than my Orange AD-30 Combo and I like my Orange A LOT...

Fender Excelsior
5
13-watt all-tube amp manufactured in China Pramp two Chinese power two 12AX7 Chinese 6V6 tage Pramp and amplification floor a spare HP 15''reli has the power tage by in 6.35mm jack which allows to attack a firm
volume adjustment knob a tremolo swich a bright and dark for rglage of tonality among microphone guitar and accordion
this amp is its configuration and architecture a veritable potluck aisment it allows to change the configuration of the hp from 15 '' to 12 ''
and serve as a test platform has all the handyman of plantte indeed there is much room to give free rein to his imagination
an example
change of the output transformer
we just regret the absence of a standby

this amp is suitable to my style of rock music blues
t he used with
fender strat telbr /> gibson les paul sg maker młody the paul
I prfere sound medium volume, but playing with the guitar volume knob can deal with the amp

Fender Excelsior
absolutely not found that thing to wonder whether the market will Fender someday. Unbelievable that that since the release was announced on no one saw anywhere. I went to Paris rue de Douai den guitarists, nobody has.
What art they doing Fender?

Super simple. Single channel. One branch, the volume is adjusted, play ... on the other hand, include amendments: change lamps, HP (take Eminence Legend 1518), and then replace the switch bright / dark with a 500k audio knob type after ... I feel better, but the guarantee is ruined. To choose.

Provide for the purchase of a reverb pedal if you like it ... I took the Boss Digital Reverb.

Its pretty "rough around the edges" but not unpleasant. It's Fender tweed but that twin reverb.

Pros: super powerful! I play in concert with the volume at 9am. At noon, everyone leaves the room! Its pretty clean until noon. From 12:00 to 6:00, it comes in a very nice crunch but beware eardrums ... I use pedals for crunch / overdrive.

Cons: no reverb. Lamps and Original HP poor. It does not jazz chorus or triple correct, but it's still quite versatile.

I play it live for a year without failure or other problem.

Did you find this review helpful?yesno
»
Read the 10 user reviews on the Fender Excelsior »

See all 153 photos of Fender Excelsior »

View all 3 videos of Fender Excelsior »