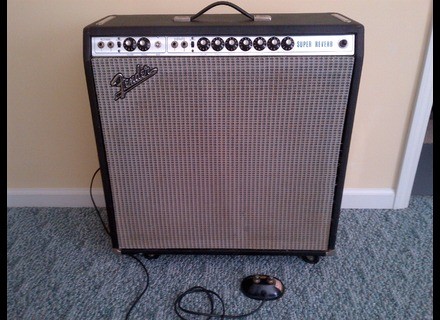 Fender Super Reverb "Silverface" [1968-1982]
5
I didn't have this wonderful amp, but I consider them as a true Fender classic stable. Whereas one of these days Fender will re-issue the Silverface amps again (by a popular demand, of course!).

The Super Reverb remained a true classic amp. Although he gained a master volume in the middle of 1975 and a middle tone control in the Normal channel through the end of 1978, this amp was almost wonderful. So the re-issued Silverface Supers can be available as a non-master, master-volume and "Twin-configured" (with the master volume and the 4th control knob in the Normal channel) versions and, subsequently, manufactured at the Ensenada's Mexican plant, like the other re-issued "Silverface" amps (American Corona factory still chiefly responsible for the "Blackface" amp manufacturing).

I'd disliked the missing 4th knob in the Normal channel, because the 2-band EQ was not enough for the clean channel to expand the tonal variations found on it. But the mighty CBS decided to add the mid tone control to fit the bill. It was in the state that this ambiguous project to add a master volume and the fourth missing control knob in the Normal channel finally gained a huge success......

Good quality and construction, however, the master volume Super Reverb had all the nice features found on the Twin Reverb amps of that particular period.

Although the Silverface amps had now been collectables, I hope that Fender will re-issue these true classics by manufacturing them at his Mexican plant in the near future. It's quite a bit that the Super Reverb was now available in his present "Blackface" '65 style (and made at the Corona facility), however, many of the "Silverface"-era nostalgics, principally in Europe, found that's almost hard to find a Silverface amplifier on a local music store these days.