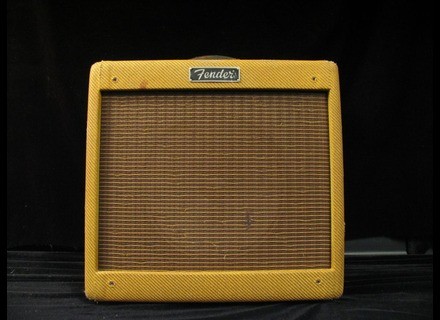 At first, I was interested in it because the price,(I had $240 in my pocket) Then I played it and it was just what I was looking for. It wasnt too complicated, and it was LOUD! It wasnt just LOUD, it had great tone, it was small, and the price was just right.

I cant really say I didnt like anything, this was my first amp, and I must have got lucky cause it was perfect. I love it!

This thing is built like a tank. Ive spilled beer on it, carried it all over the place, and it held up perfectly. I was jamming at my friends house, and when we got done(jamming and slammin tequila), I was holding the amp in one hand, my Strat in the other, I went outside and another one of my friends came plowing around in his '65 Pontiac and hit me. I went flying over the hood, and landed on my head, but I still held onto the amp. It SLAMMED the concrete grille side down, tore the shit out of the tweed, and sounded like the end of it. After I got the gravel out of my head and got it stitched up I went to check out my amp, surely it was done. Not one tube even broke, and after I glued the tweed back on the front, it sounded better than ever. I was totally suprised. This little amp is as tough as they come!

I dont think you should tour the world with this little guy, but if you want great tone in a small package for a good price, you WONT do better than this. I dont know if they make the tweed ones anymore, but the black one is just the same. My little brother got one of those Line 6 spiders and brought it over. At first I was like Wow, look at all the cool shit this one does, but it just doesnt have the guts like this Pro Junior. This amp is rugged, balsy, LOUD, and Im sure glad I picked this baby up. I you want some value without sacraficing tone and balls, GET ONE FOOL!!!

Fender Tweed Pro Junior
3
This variant of the Fender Pro Junior has the classic Fender tweed covering as well as a small Jensen speaker replacing the original Eminence design for a more traditional sound. It is a 15 watt tube combo with just basic volume and tone controls. It is like the old tweed Champs and Princetons where the motto really was "do more with less." It has no reverb, no channel switching, no effects, etc. It's powered by EL84 tubes and is run by just the single Jensen speaker in this model.

Getting a good sound out of this amp can actually be harder because there is less to work with than even a Blues Junior. It really doesn't offer much in the way of tonal adjustment so you, the player, have to vary things like pick attack, dynamics, choice of guitar, etc in order to get different voices out of an amp like this. It sounds great at just about any setting, but it really only offers that one core clean sort of tone that gets louder as you turn up the volume and brighter as you turn up the tone.

This amp sounds best with single coils I find. Humbuckers overload it with a muddy, muffled quality that really can't be changed from the amp due to a lack of controls. Using a Strat or Tele it has a great early rock and roll or blues sound that has just enough brightness to cut through, but isn't overbearingly harsh. The Jensen speaker also helps to warm things up as well, which is a definite plus. It's not the most versatile amp in the world, but the tone it does do it does quite well!

All in all I think the Fender Pro Junior is a great simple combo for recording or small gigs where the player just wants a tone to enjoy and not tweak constantly. The tweed covering on this edition looks great and the Jensen speaker takes things back to that classic era even closer. They can be had for about $350 used which isn't a bad price considering the quality of this amp and speaker pairing. Definitely worth a look in my opinion!
Did you find this review helpful?yesno
»