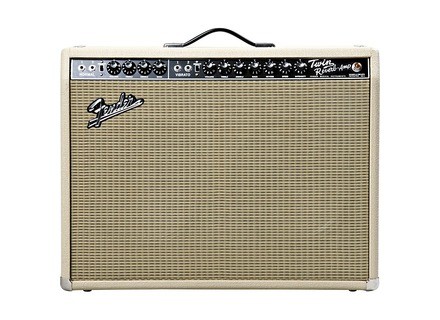 Bob l'éponge's review (This content has been automatically translated from French)

For those who do not know yet, the Twin is as clear sound, no saturated channel for the latter one prvoir pedals!
The absence of effects loop can possibly GNER, but with a pramp such, we do not want all need to go around

It's simple, it's super simple!
APRs have respect for the few minutes of heated de rigueur for any amp lamps, and there is that connect your guitar, turn the volume (which is for gradual plutt for an amp of this power) a bit of reverb (del gaffe of the 3 / 4 has become ingrable).
It sounds alone! Eventually a small correction may be warranted because the bass in the Twin dlivre much!

I bought it because I wanted to (finally) a super clear sound and I do not t the!
Intermdiaire position on legalization, we get beautiful bass (2x12 "inside) although a little invasive at times, much of mdiums Dfine slammin and treble but not aggressive.
Then free to change itself rglages to get his wish and it is quite easy because legalization is still effective and trs trs musical.
I use a Tele and I get the 2004 US sounds pretty varismme if I stay in a register even when slamming enough with this combination. But micro serious, a little less tonal and possibly a little less treble on the amp and it's easy to have a more velvety.
What remains striking about this amp is the extreme clarity of sound, is transcribed inconvnient is that the slightest imperfection of play!
The lamps are clearly felt in the "lascititquot; sound, the attack is raction trs trs sensible, or the good transistror (JazzChorus style) but also clear sound trs too "right", the Twin what its really "living" that does not betray its reputable legendary for its clean!
It will be possible to saturate the lights by pushing the volume and pitchers look pretty sound, but it becomes deaf before gnral: o8:

So if we take into his ears and even when we want to enjoy some nice crunch, I would strongly recommend a small overdrive pedals Tubescreamer style that can be useful for a crunch thanks to intrinsque gain the pedals, or to saturate the Twin lamps through the gain of 0 or 1 and pedals to push the volume of it, guaranteed!
For my part I invested in one pedals a little more versatile,
880 Real Overdrive ( https://fr.audiofanzine.com/produits/index%2Cidproduit%2C65008.html ) which can broaden its range of sound more distorted, but to a limited extent because the Twin does not always Ragit trs good and its trend would soon be EMDU (acute screaming ), but for the large rock was going on when even though he'll just spend some more time rgler sound.
Note that I have tried this amp with my TV which is quite a guitar type, do with another guitar ...

I use it for just over two months, and I plan to install my bed while prs to never leave!
What I like most? Hmm you think ..... THE LIGHT OF ITS ****** P!
What I like least? Weight: 33kg
He was tried at the same time that a Hot Rod (the same comparison is not possible lol, its not clear trs clear, and the Distortion channel not worth the trouble!) And a AC30CC2, super drive channel no doubt, pretty clear sound, but less "pure" than the Twin, and because I was looking especially a super clear sound, ft is the choice ...

How do you report qualitprix?
Er difficult to say what we say but the prices plutt good

Exprience with, you will do again this choice? ...
Hmm, I might be taking a head with a good speaker and for more pratica of flexibility but otherwise yes!