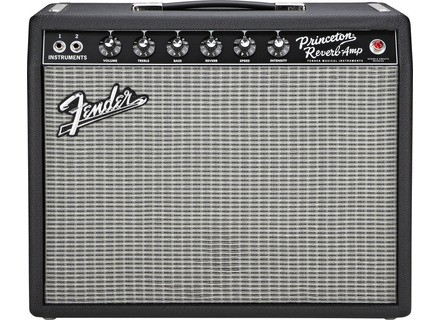 Fender '65 Princeton Reverb [2008-Current]
4
The Fender Princeton Reverb is the smallest available amp in the Vintage reissue line. It features only the one channel, controlled by volume, bass, middle, treble, reverb, speed, and intensity (for the vibrato) controls. It's based on the original blackface model that was popular with students and studio musicians in the '60s. It puts out 15 watts of power and is powered by the standard Fender tube of 6V6s. It's a pretty simple amp, forgoing even the extra channel that most of the Vintage Reissue models have. That being said, if you're looking for a small yet clean amp that sounds great, here you go!

Getting a good sound with this amp is pretty easy. Where it's smaller and only 15 watts, it's much more likely that you'd be able to crank this one up a little bit, even in a smaller room just to get some natural sustain and compression happening from the tubes and speaker. This factor makes is great for recording at studio sessions or for smaller gigs. Even the 22 watt Deluxe Reverb can be quite loud, so this little Princeton is great if you need just that little bit smaller. The controls respond as you would expect. There is a bit less bottom end in this amp obviously, because of its smaller size but that's to be expected I suppose.

The tones out of the '65 Princeton Reverb are pretty much standard Fender. The cleans are very crisp and clear, great for country or blues type tones, especially with single coils. That being said, an added benefit of this is that you can turn it up a little bit for natural compression. It's still not an amp I would expect to turn up full bore for power tube saturation (you'd still want a pedal of some kinda, but overall it can get you closer to that sonic satori. The onboard reverb and vibrato are of excellent quality as well and the amp sounds quite 3D and clear just like its bigger brothers.

All in all I think the Fender '65 Princeton Reverb is a great amp for someone looking for classic Fender cleans in a simple smaller wattage package. It sounds great and has the ability to be turned up a little more than some of the bigger Fender amps. It sells new for about $800 which is a good deal considering the tone and quality, and hey, what else can you get that's this nifty for under a grand that will sound great? Not much that I know of! Definitely worth a look if you're shopping.

Fender '65 Princeton Reverb [2008-Current]
4
This is going to be one of you no frills basic classic Fender amp. There isn't going to be much to this amp. It only has one channel and that is a clean channel. You can turn it up a bit and get a very low overdrive.

For what this amp does it sound very good. This is going to be an amp for the pop or country player. There is no high gain in this amp what so ever. You have to crank the amp up for the tubes to start cooking, but cooking might be an over statement. This is going to distort too much. It will be very mild and not much too it. But no that that's a bad thing just a certain low gain low saturation style.

This is an amp that any guitar will sound goo with. You will get a solid chimy sparkle tone with a Fender Tele or Strat. You will get a good blues and thicker tone with a Gibson Les Paul. This amp takes pedals very well, so a nice analog delay will match quite well with this amp.

This is a basic amplifier from Fender. You will not get a whole lot of features but just straight ahead tone for days. this amp is a solid tonally grand amplifier with a tone of character and warmth. AT new these amps come in at around $900. A think that is a bit on the high side for single channel tube amp.

I would recommend this amp to the person who knows what he is looking for. This isn't going to be everyone's cup of tea since things now a days need to have more features. This amp is going to be for the more classic simple type guitar player.

Footswitch (included) for reverb and tremolo

The configuration couldn't be easier. Just plug (no standby) and play!

There is something that needs to be improved: the footswitch is provided in a padded bag stapled to the inside of the amp's cabinet. As I unfastened it I almost damaged a tube socket, and the staples as well as some bag pieces are still fixed to the wood! It's a shame for an amp with this price tag...

Another critique: the cabinet's vibrations generate noise under a certain frequency (F sharp and below). So you have this problem with the three lower notes. It's not such a big problem when you play but it surely is unacceptable for recording and I will have to solve this problem (apparently it is possible: take a look at the respective topic on Harmony Central).

The sound is what justifies having spent so much money. I play a 1962 Strat CS and it never sounded so good as with this amp: the sound is extremely dynamic and responsive even with the smallest nuances. The high-frequency range is magical, the low-end is deep and present (although the amp has only a 10" speaker). Treble and bass controls are very effective, every turn, slight as it may be, affects the sound equally.

Perhaps you want to know if this amp can be played in an apartment:

- The clean sound has a lot of character and it is very musical (warm lows and crystal-clear highs) even at low volumes (2).

- But it's impossible to get a real crunch sound without cranking it up so you'd better have extremely understanding neighbors. Even with my treble booster (TAD Range King), I can't get a crunch sound with neighbor-friendly levels... Perhaps with humbuckers...?

The reverb sounds very deep but not muddy. But I find the effect's intensity raises to quickly: when the control is set to 2, the reverb is already easily audible...

The tremolo effect is very nice. It has less character than my EHX Pulsar but it generates less noise!

I don't want to rate it because I would have to be objective and my opinion is only subjective...

I've owned it for one week and I don't think I'll ever get bored of it.

I also had a very disappointing Laney VC15. I sold it to buy the Princeton. I also tested an Orange Tiny Terror combo. I found it nice but the sound was lifeless at low levels (I play mainly at home).

I find the value for money ok. There is a huge price difference between this amp and a Blues Junior but I think it's worth it.

If it ever gets stolen, I would buy it again without hesitation: this tube amp is very expressive, even with (very) low output levels (except for crunch sounds).
Did you find this review helpful?yesno
»

ilrar's review (This content has been automatically translated from French)

Fender '65 Princeton Reverb [2008-Current]
5
What kind of amplification (lamp, transistor ,...)? What is the power dlivre? What connection? What rglages the effects? * ...

The configuration is it simple? Gets it easy to sound good? The manual is clear and sufficient? * ...

As a single channel, the more you push the sound, the greater the distortion. Until 4 / 10 the sound is perfectly clear.

Amp trs easy to use. I use this amp in a home studio flat configuration. This amp dlivre low volume sound of incredible quality. A 2 / 10 the sound is superb and no more noisy than TV!

As I live apart often I could test the disto ... I found it average. Personal I use a pedal for distortion of the low volume.
The distortion seemed trs blues ... see muddy. As much I love the distortion of both the Hot Rod ... l. .. blah ...

Against by between 4 and 6 on the volume knob was a great overdrive, crpusculaire, great!

The 15W ears become damaged enough rpt. I think a can also do a concert if the sound of the amp is transplanted.

Is it your style of music? With what (s) guitar (s) / low (s) or effect (s) do you play? What kinds of sounds you get and with what rglages ("crystalline", " ",....) fatty what are the sounds you prfrez, you dtest? *
Style of music around: exprimental, pop, rock, noise, alternative ... I'm a fan of Gainsbourg, Sonic Youth, Logh, The Velvet Underground, The Smaching Pumpkins ...

I play with a Fender Jazzmaster (Mexican) and my roommate with an Ibanez Steve Vai Floral. First observation: the amp Restitut vritablement the characters of each guitar.
The strength of this amp is its clear sound sublime. Defines how the ...

- Not at all showy as some Fender models

- The highs are as low trs Submitted. Sound so balanced and trs hot. I also liked the warm sound of the VOX AC15. However, I criticized the lack of VOX shine ... especially with a Jazzmaster (the most serious of Fender). With VOX guitar I was afraid of food frquences on bass and does not properly s'insre in the mix.
- Reverb and Vibrato MAGNIFICENT. It is just an empty string we peed on it so it's beautiful. - Clear sound extremely well Dfine. When an ISP agreement really means each string of Manir individual. So the amp requires some precision in the game ..
- I could compare this amp in a recording studio provided with: a Mesa Boogie Rectifier, Fender Hot Rod and a Crate. I will not talk about because we achte distortion this amp for its clean sound of legends, not for its distortion. Brief me e compared the sound of the Mesa Boogie clear sounded too ... ... the rock FM Hot Rod silent duller, right, so hot but a little more rock, a Crate pure distortion but a clear right as an orange, so we talked about not even. In the end its my Jazzmaster Amp + is similar to that of bands like Logh or Mono.

How long you use it and what is the particular feature you like best and least? Have you tried many other models before acqurir? How do you report qualitprix ? With the exprience, you do again this choice? * ...

I am perfectly happy with my purchase. With all my musical hardware, it is certainly my prfr Now I am a total lover of Fender.

In résumé:
+ The clear sound sublime
+ A good overdrive
+ Playable apart
From personnalitbr + /> + The rverb and vibrato
+ Easy transport

- Single channel
- Bof disto apart and not used in
- It's not even when given!

Did you find this review helpful?yesno
»
Read the 7 user reviews on the Fender '65 Princeton Reverb [2008-Current] »

Published on 06/04/08
Fender presents the latest guitar amp in its Vintage Reissue Series, which is none other than the long-awaited reissue of the Princeton Reverb Blackface.