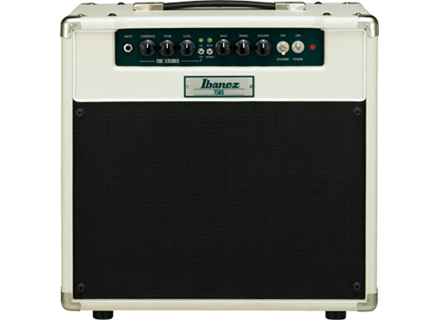 guilbertvince@mail.pf's review (This content has been automatically translated from French)" An amp that makes you want to say ... Hmm ... JTM."

Ibanez TSA15 Combo
5
Ibanez amp 15 watts all tube single channel, the former comprising:
- Switch to switch to 5 watts
- Celestion 12 inch
- Circuit Tubescreamer integrate activated, as if it were a foot apart.
- Boost +6 db activated
- Effects Loop for integration between Tubescreamer pedals and preamp.
- Plethora of speaker outputs on the back
- The reliability Ibanez
- A very measured weight
- The mouth of hell!!
To make the celebration complete, it would have in my opinion a DI output. Too bad, but you can buy in the shops so excellent .... No problem.

Paradoxically, it is the perfect amp if you are a "pedalgeek" is that you use a lot of pedals.
The amp itself is designed in a spirit Fender, but with a slightly less "Bright", which is more velvety ears hurt less at high volume. I find it best. Design around 6V6 lamp is that the sound is still wrong not to own volume max.
The Tubescreamer a great sound for blues vintage, close your eyes and you can feel a shiver run down his back. It is warm and dynamic. Yet it is a transistor circuit ts, but must admit that it sounds much better than many of Crunch channel lamp.
With at max gain, then we enter the world of Led Zep and early AC / DC with a kind JTM45. Perfect for the vintage hard rock and heavy blues, but its use does not stop ...
With an effects loop smartly placed between the preamp and Tubescreamer lamp, you can use the tsa as a boost, and there friends, it's the same brother who is the school! Depending on the pedal or preamp that you place in this loop, you'll be able to go touch all styles, the same metal.
Personally, I started a clone of Big Muff Russian ... I no more nor less than the sound of the black keys!! In clear, Crunch and saturation. (The big muff mixture boosted by a TS9 is just overkill and enjoyable).
With my Bogner Ecstasy red, then I approach a high gain kind Diezel VH4 (For the Tool for instance).

As I said earlier, this amp has the personality you give him offering him a pedalboard quality.
Then on the amp itself, it can only praise its sounds delicious bases respect your guitars (Gibson SG for me).
The sound is very light and Fenderien on the clean channel, a little softer. When the Ts is switched on, it approaches a JTM45. Therefore has a small vintage coloration of mediums, more exquisite.
I've had other tube amps (Marshall, Fender, ..) and none had ever given me much pleasure, yet it is one of the cheapest.

You guessed it, I love this amp. It to her, it is scalable, it is convenient, all-terrain and reliable. Some would say ... "Yes Ibanez, it is no dream." I simply tell them that I agree, but in the meantime a "Retro King" appears spontaneously in my opinion, this amp gives me complete satisfaction and musically, I go where I want with, always with his magic while it for less than 400euros. That gives the opportunity to have fun on some pedals shops.
PS: I put 9 because if perfection existed, it would:
A DI box output as the majority of small amps of time
Setup of a medium as the version 30W
A reverb and tremolo as the fender and vox
A second effect between the preamp and power amp loop
May be a version 2?

15 of 17 people found this review helpful

Ibanez TSA15 Combo
5
It is a tube amp switchable to 15W 5W. The hp is a Celestion 12 "Seventy80.
The lamps are:
Pre Amp: 12AX7 x2
Power Amp: 2x 6V6GT
There is an effects loop, and more importantly, and this is what makes the originality of this amp, there is a tube screamer built. That is to say that this amp is a single channel, which switches on a TS.
2-band EQ very effective.
The simple but effective in a lot

It's simple you connect your favorite skyscrapers in this little thing and hop it sounds!
The manual is not very useful in my opinion nothing complicated to operate this amp.

With a strat on the clean channel you get something very vintage as setting, you can go from jazzy sound through the neck pickup to the country on intermediate micro. The sound can be very clear crystal, the only flaw on this channel it did not reverb me I miss her a bit but who cares it sounds little.
By engaging with the TS strat gives a range of very usable crunch, playing some moment we quickly want to play a few riffs of Hendrix.
Prs Custom 24 with a humbucker equipped with sound is more aggressive, we can tackle some hairy ACDC riffs and sounds!
The guitar amp greatly respect and nuance of your playing
I love the sound it delivers

I use it for 6 months, I have tried a lot of model before buying mostly more expensive amps, Marshall Haze, Spider Valve, fender supersonic and a marshall jvm.
Both amps that I liked more and marshall jvm and fender but at the time I did not have the finances.
For 415 € I would do this choice? Obviously I regret even a little separate me even if I spend just today on the JVM.