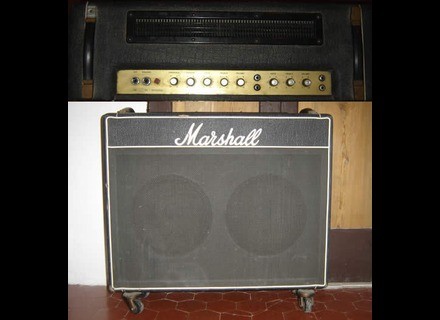 Mercredi51's review (This content has been automatically translated from French)

Marshall 2040 Artiste [1971-1978]
4
The delightfully named Marshall 2040 "Artist" is a tube amp made from 72 to 79, if I remember correctly (the one I have was born in 77), a power of 50 watts (a pair of EL34) with two independent channels bridgeable: a normal (volume-treble-bass) and bright (volume-treble-bass reverb) with a knob of presence common to both. No master.
The preamp consists of three ECC83 (there are 4 in all with out of phase).
The combo loads a pair of Celestion Vintage 30 (licensed Marshall, depending on the year), classical and effective, and offers an additional output with impedance switch and a footswitch jack that I have never tested ...

Not much to say about the use, it was simple at the time, especially with an equalizer bass / treble and no master ... Presence of the knob is very effective and can be remedied fairly well alongside "light" of equalization, if one is not too pinailleur the color of sound. The amp needs to warm a long time to scream properly (allow a good half hour).

Therein lies all the controversy ... If you are a fan of his or SuperLead MK II and legendary potato, you will be disappointed by 2040. It's a real gas plant at the time (especially in Marshall, used to the simplicity), the sound is clear and easily crunch.
The first channel has a very bold with lots of mediums and psychics serious. It is mainly the one I use in a group (Powerpop / Grunge at the Dinosaur Jr) with a big Les Paul Studio 92, giving her one by about the effect of a good cooked in beer! Sound "full" with good compression, which really starts to throw up from 4. The problem is only 5 to 10, we do not win really crunch ... Neither volume! The sound thickens, drooling a little more frankly without saturating. I use a small saturation of at Boss (bottom level, gain between 0 and 2) to remedy this lack of potato: by applying well, you get a large semi-natural overdrive very correct, but it's still garage!
The second channel is the first that the day is to night. A clear, crystal-clear and precise but very dry, as a result, less powerful. The reverb is decent for the time and the brand (as long to put it above 7 ...) and offers a very different sound to the amp. A mean volume, we get a fantastic result by adding a little overdrive.
Bridge in the two channels, it is possible to mix the two channels and to measure them as desired, which opens again the range of sound but loses a bit of potato to the amp.
I put 7 as it is an amp that still sounds very interesting, even if the volume of a 25-30 watt ...

So this is an amp a bit strange (which also earned him a bad reputation) that provides a very interesting despite the lack of clear potato. That said, everyone does not play (note I do) in a band with two drummers loggers can scratch and playing a Hiwatt Custom 78-100 that causes the implosion of the human brain in excess of 1, 5 to the Master (yes, yes, I tried) ... I see this in the surf rock, garage, blues a little dirty (or even own lol) or jazz, with a small TV or a vintage Epiphone that this amp is really a place, even I m 'to use it for the low-fi and grunge to fill!
The last point concerns the components ... It all depends, of course, which is passed hands between the amp but it is necessary to pay attention to the state of the electronics (and there is no harm in that one ...) and transformers. As for mine, I had to replace the transformer power supply which delivers more than enough juice in the EL34 (350 volts instead of 420). So check up on these amps de rigueur!

laudag's review (This content has been automatically translated from French)

Marshall 2040 Artiste [1971-1978]
4
Photo by delegates from a front view (bottom photo) and a top view with rglages (top photo) combo amp on wheels while lamp 50 W with two speakers from the years 70 (74 it). Two channels, each with two entrances: one channel with simple rglages (volume, treble bass) channel with rglages more complete (volume, medium rather acute, severe reverberation). One button on / off button + a standby At rear exit for PA + more ... Are natural crunch according rglages of knobs.

Simple setup, no manual, its easy to get shades of playing on rglages and according to the selected channel.

Perfect for blues and rock. Fatty rglages are possibilities but its clear.

I've had ... 25. My first amp. Rcemment rvis because the speakers had suffered and some components (lamps and a few transistors) taient fatigus. The natural distortion throws a lot, but it is a bit heavy for a combo, while remaining portable.
Did you find this review helpful?yesno
»