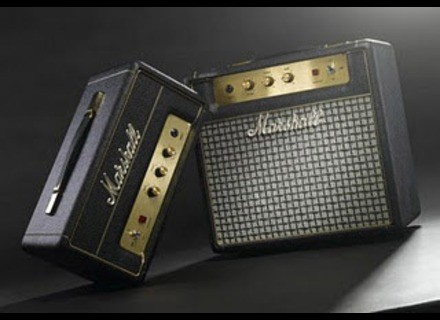 Marshall 1970s JMP1C
4
I tested this amp in the store with a les paul traditional 2014 with custom pickups 59
100% lamps
this is an amp with a boost and amp 1w but can pass 0.1 w
bass
treble
and volume! no gain! and it's a shame
this is old but if you have no neighbors! 1w and thoroughly> tinnitus insured!
1w: out of the question in the apartment unless you have nice neighbors
0.1 w is playable but not fully either
this is a POWERFUL amp! beautiful dynamic, but I did not like the sound
you should know that this amp gives 100% of its punch with the volume at 10 and 1w

So, without it: a softer sound with less gain

The sound is good
crad but not enough for me
this is neither crad
neither beautiful
I think you have a guitar with powerful microphones
gary moore fan, it will not be enough for me

This is rock, hard rock no more
blues slightly
the sound is a little cold
I'm not say "wow!" therefore, next

At first I was going to buy
qq months later, he made me less effect
I think directing me to other models 1w
I think the problem comes from the combo size
would surely sound much better with an external 1x10 1x12 or so, buy the head rather than the combo
this amp is a very attractive but quickly boring actually
not rely on youtube demos
it does not give quite the same sound true
it is softer
I do not do so because the purchase has not convinced me the test and I have yet tested 2 times in several months and low and high volume as what can be amazed the first time, but if we do the second is not, do not buy
can be impressed rhythmic but solo, I was quickly disappointed by the sound quality despite the beautiful les paul

Djyne's review (This content has been automatically translated from French)"The Real Mini Plexi!!"

Very nice amp for those who love the plexi, very well made and collector!
Indeed this amp (and other 50th anniversary of the line) will be produced in 2012.

Very simple configuration, a bit corny but basically you connect and it sounds!
No medium in the equalization but we can manage easily.
So two powers: 1w and 0.02w
1w is already too powerful for the house when you push a little silly but it&#39;s 0.02w nickel (or even a bit hard if you push a little volume, and yes there is no master ...). If you want an OD at lower volumes, it works well with pedals.
Very small size, very convenient to carry.

Well let us be clear right away I&#39;m a big fan of marshall.
I will be brief but I have a very good point of comparison: I have its big brother the half stack which is supposed to imitate the sound and aesthetics back or head marshall 1987x 50w lead with 4x12 cabinet in greenbacks, the 1960ax.
I love this amp and although it too hard, so I wanted to get closer to that sound at home.
Well ... it is rather successful with JMP1C which has basically the same personality in mini version, that is to say a great dynamic, highly responsive, more rock sound (as opposed to the 60&#39;s marshall blues genre rather JTM45) and quite aggressive.
Think Led Zeppelin ...
A great sin, I was really surprised by the power and punch of this amp despite its supposed "low" power and especially its tiny size!

Good for those who know (and I think it is mainly the connoisseurs who buy this amp), for me it&#39;s really SOUND PLEXI 70&#39;s for the house!
Relatively speaking of course, it does not push as much air as a half stack, but the house is really nickel. The sound is really full ...
Wholesale with single coils it slowly starts to cruncher fourth volume, I have not tested with double but it must be worse (so to speak ...).
After pushing off + volume, it increases (but not that much, like its big brother) and with the gain. Personally I prefer to put the gain at 1/4 and use the pedals, I love the clean boost!
So this amp takes pedals very well, tested with a Seymour Duncan pickup booster SFX01, nickel, a cry baby wah, a MXR Classic Fuzz, a whammy, nickel every time.
Small problem with the big muff she compressait too ...

So style of music is perfect for me to say, blues rock (style white stripes, black keys). According to other styles that I find is less suitable, but you can really have a nice clear sound even though there is no reverb.

I play this amp with a G & L Asat Classic U.S. (what a telecaster, and better

) and a classic vibe 50&#39;s strat.
In 2 cases the amp really respect the personality of the guitars, you really feel the difference! In short very transparent amp with a real personality and very responsive to the game (mode I set the distortion rate function of the attack of the pick or fingers).
There is no real sound that I hate, and more HP is not yet lapped it should get even better!

I use it for four days, several hours a day and frankly NICKEL!
It did what it was designed: a plexiglass for home ...
I love it, you just know what you buy.
I did not try before you buy it because it is a limited edition 50th anniversary of Marshall and therefore not easy to find in stores.
I had seen the tests on Youtube, and I trusted to Marshall ... for me they have not lied!
I also have a Class 5 (head version) and even with the headphone jack (so reduced) is too strong for the house. There with the JMP1 it does. I also found a hair in his aggressive + that the class 5 (I have not tried but the class is 5 + may be close to the JTM1).
What I like the +: SOUND PLEXI AT HOME!
What I like least: the difficulty to adjust the volume without inflencer gain (and yes no master but this is what adds to its charm)

Price / quality ratio right in my opinion.
Yes many will say that 650 euros it is an expensive Watt but I was willing to invest for the sound I wanted. Everyone does what he wants, I think for very good overall quality of the beast the price is right.

Yes I would do this choice!