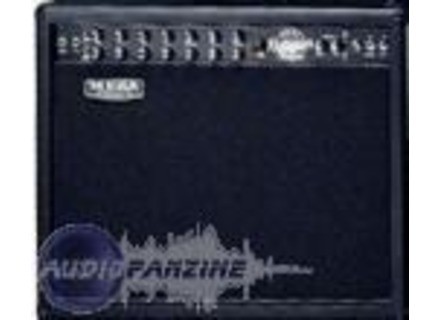 All user reviews for the Mesa Boogie Trem-O-Verb Combo

This is where this amp shines. Especially when used with EL34s the cleans break up nicely on the Clean Orange setting. On the Blues Red the clean pushed with a Tube Screamer does a nice Gary Moore type lead.
The Vintage Orange high gain is somewhere in the neighborhood of modded Marshall with more girth in the lower mids.
The Modern Red cuts and is clearly aimed at guys that like Soldano SLO-100s. It cuts and still isn't overbearing on top.
Used with the variac setting adds sponginess to the attack. Also in Orange high gain the tube rectifiers up the sponge factor more for that AC30 about ready to fall part vibe.

This amp proofed to be super reliable and roadworthy. The only issues I had in 20 years was a bad reverb pan, and a blown screen resistor because of a power tube failure. I should also mention that even before my warranty had expired I had a tech add a bias control and ran the bias a bit hotter with the EL34s than were Mesa with their unadjustable bias would have you at, and that made the amp a lot more fun to play.
I have yet to play a Mesa that is as much of a fun ride as this was.
Did you find this review helpful?yesno
Cookies help us improve performance, enhance user experience and deliver our services. By using our services, you agree to our use of cookies. Find out more.