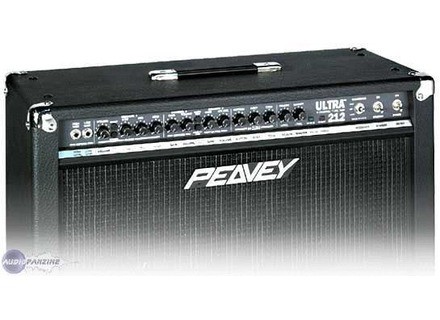 Peavey Ultra 212 Combo
5
I was wandering through brand x music store and my eye caught a cosmetically well designed Peavey amp.But how did it sound.I had always thought Peavey was for country players untill I plugged in this vintage sounding(not considered a vintage amp)beast. When I heard the overdrive I thought ,am I hearing things,or is this really real? I came back 6 months later and there it was in it's new condition,with manual waiting for me. I tried it again and was still amazed at the whole show. I mean ,this was a Peavey.I bought it for $379


This unit has a 3 button footswitch for 2 separate overdrives,ultra and crunch and one for the clean channel. It is very helpful to play rythem in one channel and switch to the other to play lead.The clean channel sounds as good as a 60's Blackface.It's well balanced treble and bass is a complement to this amp.It uses 2-6L6 and 4-12ax7 tubes. I'm still wondering how they did it. With every one else trying to build that certain style amp with point to point wiring and yadayadayada,look no further .The country boys moved to the big city (maybe Fullerton)and got the hang of it without bragging or much advertising.

Hartleys hero was Leo,so he follows some of his thriftyness( he was really a cheapskate,but back then even those parts were good) and uses compressed wood instead of plywood.This makes the amp heavy and cumbersome.Leo used plywood but bought the cheapest speakers he could find.Hartley makes his own speakers and they are full sounding talkers (Sheffield 1230)I like em pardner!The only other gripe is the footswitch having the 3 buttons so close together. It makes it tough to push just one without pushing another also.I can live with all that as long as that TONE is there

This unit is built well. I was a little dissappointed at the mounting of the pre amp tubes as they are set right on the circuit board. When I pulled them,to clean and nose around etc.,the circuit board would slightly bend,giving me momentary gear farts.This amp also had a broken resanance switch which was a part defect,not because of abuse.The rez switch gives 3 different types of speaker sounds which makes it versatile for different music styles.The on-off switches are on the front which is easy to get to,but I'm a little concerned about them sticking out to far to get snagged or snap off.It's a 60 watt unit and can be purchased in a 60/120 watt head.At first I thought it might be underpowered,but it does have a master switch and can really move some air.The lower wattage may have something to do with it's well balanced tone.

Had I not seen this amp,I never would have been able to experience it's capabilities.The tone is glorious,the overdrive is like a Volcanic eruption with molten lava spewing forth melodic notes of destruction.My whole mindset of Peavey has changed.I studyied more on their equipment and apparently Ed VanHalen is endorsing amps and guitars to his specs.That is probably flattering to ole Hartley as his products are being used by one of the best rock guitarists ever.Anyway,Ya-hoo,I think I like it!

If you get the chance to get one of these amps in front of you you will immediately know the power it has with the first strike of the power chord. This crunch master amp has so much gain sometimes it is unusable. Either way it is a lot of fun t play around with that much overdrive.

The amp like all Peavey amps sounds the best with a Gibson Les Paul or another guitar with a humbucker installed. The Peavey amps can sometimes have a lot of fizzy distortion which isn't a bad thing but just a taste thing. A think the humbucker is able to clean that up a bit with the double wound pickups. This is a rocker guitar amp and with two distortion channels there isn't much in the heavy metal world that this amp cannot cover.

These amps have been discontinued for a while now. I have seen them in the classifieds for around $350, which isn't bad for a two channel tube amp. You can find them pretty easily on ebay or a forum of some kind. They stick out like sore thumbs sometimes.

I would recommend this amp to anyone who need a great sounding metal amps that can do just about any metal or hard rock tone imaginable. This is a good and cheap amp for someone needing to rock out.

Peavey Ultra 212 Combo
5
Made in the USA

Clean has a separate passive EQ, the Crunch and Ultra channels share a active EQ

Bright switch on the clean channel, and separate boost buttons for the Crunch and Ultra channels

High and Low input (6 dB boost on the High input)

Aesthetically it's not the most amazing of an amp, which I think may be part of the reason it's not well known. Also, no famous player that I know of ever used one, unlike say, a 5150.

The manual is very easy to understand, and even if you don't understand a particular thing, Peavey's customer support is second to none if you need to call them. It's pretty easy to get a decent sound right off the bat, but as with every amp, it may take some tweaking to get it right where you want it.

This is what really counts right, how it sounds right? Well, let me tell you, it sounds KILLER! I think this is one of Peavey's most versatile amp, it does everything from Praise and Worship to ThrashMetalcoreDeath Metal stuff. But even though it can do clean and light-gain stuff very well, I think those using it for just those sounds are really throwing away it's potential. This thing was designed to be a High-gain Metal amp, and it does just that with flying colors. I would say that it
has less gain on tap than say, a 5150, but it still has way more than plenty for just about anyone.

The active EQ on the CrunchUltra channels is very cool, and very useful as well. I can't say that I use the bright switch on the clean channel at all though, for it makes it much to bright for my taste, though it may work better if I had a darker sounding guitar.

Speaking of guitars, I use this amp with a BC Rich Warbeast NJ Deluxe that is loaded with EMG's. I used it with the stock combo speakers in it for the first year and a half, and then I got a 5150 Straight Cab that was loaded with Celestion V30's and G12T-75's in an X pattern. The combo speakers work fine for clean and blueslighter gain rock, but there is no comparison between them and when I'm pushing the 4x12 cab speakers. The 5150 cab just sounds so much more open and in-your-face, but at the same time retains the tightness needed for Metal.

Now, speaking of tightness, it also has a resonance switch which is VERY cool as well. It essentially changes the bass response of the amp depending on where it's set to. I normally run it at "Loose" when I'm in standard tuning, but I tend to flip it up to "Medium" when I'm down-tuned.

I want to say one more thing before I leave this section, and that's about the clarity of this amp. I hate muddy low-end. Thankfully, Peavey did something right when they designed this amp. It's pretty amazing, being able to hit a full chord with heavy distortion and hear every note ring out, but this amp does it every time.

Overall I can't recommend this amp enough, especially if you play metal. You just can't beat a good high-gain tube amp, and that has been proven over and over again. The only thing that I would really change is that I would have preferred a separate EQ for the Crunch channel, instead of the current shared EQ between the Ultra and Crunch channels. I paid $415 shipped for this amp, and that was with brand new tubes! These amps go for a crazy low price, and I honestly just don't know why. They easily hold their ground against far more expensive amps, and in many cases they are more versatile too boot!
Did you find this review helpful?yesno
»

pine06's review (This content has been automatically translated from French)

Peavey Ultra 212 Combo
4
This is an all-tube amp with 2x12hp sheffeild model 1230 60Watts, 3 channels, with 2 low or high gain among, crunch or ultra gain, reverb ...
This is really a very good amp that can be used for large Mtal sounds like jazz sounds or ddisto lightweight. I have a IBANEZ up with EMG, and clean sound went very well.
voilou!

I do not have the manual, but there is honestly not needed, the question is, what kind of sound is desired, or even of triffouiller up what this suit.

I bought it there for two years now, and the sound was really nice, it can well s'clater in several styles, and this is very pleasant.
Did you find this review helpful?yesno
»