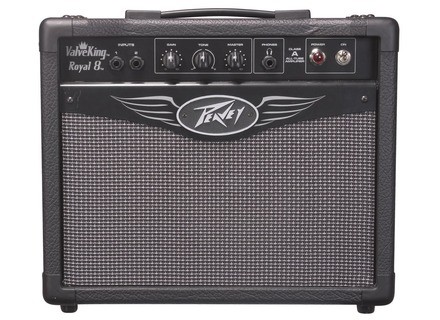 Peavey ValveKing Royal 8
4
In today's world where space is considered a luxury, small guitar amplifiers are a godsend. It's not really surprising then that low-wattage tube amplifiers have become the trendy item for people who have crafted home studios for personal and professional use. One of these small, budget-friendly tube amps is the Peavey Valve King Royal 8.

As the name suggests, the Peavey Valve King Royal 8 is a 5-watt all-tube (or all-valve) amp with a single 8-inch speaker. It is a class-A amp with a very straightforward design, having a single 12AX7 tube for the preamp section and one EL84 tube for the power section. Looking at the front panel demonstrates its simplicity with its two inputs, an on/off toggle switch, a headphone jack, and three chicken-head knobs for control over gain, tone, and master volume. It's pretty obvious that this amp doesn't have all sorts of "bells" and "whistles" like a three-band EQ and effects that you would find in other amps of the same size.

The Peavey Valve King Royal 8's sound is simply that what you would expect from a tube amp: a nice, warm tone every electric guitar player would appreciate. With the right settings on one's own guitar plus the tone knob at 12 o'clock, the gain somewhere at around level 3 or 4 (this is not exact as there are no numbers around the periphery of the knobs), and the volume around 12 o'clock, we can get a pretty decent clean tone for a tube amp. Cranking up the gain to full provides a nice crunchy preamp distortion. Given the size of the amp, tone shaping possibilities, and a limited volume output, the Peavey Valve King Royal 8 is very useful in recording. For recording, one is required to use at least a single microphone because of the lack of a direct output jack, encouraging users to treat the amp more like an acoustic instrument during recording rather than just simple sound reinforcement.

The manual include is rather simple and easy to read. The matter of fact is that the Peavey Valve King Royal 8 could be used straight out of the box without the need to go through the manual. You can just plug it in to a power source, plug your guitar into one of its inputs, turn it on, fiddle with the knobs a little bit, and just start playing. A user can easily get a good sound from it on its own. For an amp its size, it is surprisingly loud and could even hold up on its own against a drummer without mic'ing it up. However, the amp cannot be overdriven to extreme levels (i.e. distorted sounds for metal) with its set of controls, and so getting it to sound really heavy for hard rock or metal requires the use of pedals.

I use most of my electric guitars on the Peavey Valve King Royal 8. Since I usually play jazz with it, I like tweaking it to get a clean yet warm sound. Occasionally, I would just set the gain knob to full for preamp distortion and control the amount of distortion by just lowering or cranking up the volume knob on my guitar. It is surprisingly responsive to volume control found on most guitars, and so it is relatively easy to get some classic sounding tones. In my experience, I get great sounding tones out of it with passive humbuckers like a Gibson PAF. To get heavier distorted sounds, I would use effects pedals with it.

The greatest thing about the Peavey Valve King Royal 8 is its simplicity. It's the kind of guitar amp that you just hook up and play right away. It's very easy to get great tones out of it because there's not a lot of things to adjust other than master volume, gain, and a single EQ knob. For a tube amp of its quality, I can say that it's money well spent. It's an all-tube amp you can get at a budget price. Compared to other amps of similar design, it has more control options than the Laney Cub 8 and the Epiphone Valve Jr. (three knobs for the Valve King Royal 8 against two for the Laney Cub 8 and one for the Epiphone Valve Jr.). I do think, however, that it would have been better if it was a two-channel amp (clean and overdrive) like a Blackstar HT-1. Had Peavey decided that it should have separate clean and overdrive channels plus footswitch control, it would have been the perfect studio and practice amp. Overall, I do think that the Peavey Valve King Royal 8 is an excellent all-tube amp that would meet the needs of most guitar players for studio and practice applications.

CONS:
- Single channel only (no separate clean and overdrive channels)

bensouss's review (This content has been automatically translated from French)" As manure lies a Rose ... but we must first remove the manure!"

Peavey ValveKing Royal 8
5
Tube Amp Class A 5 Watt 2 entries with an attenuated (like Fender) and a headphone output.
A gain and a master tone.

Config super simple.
For good sound that's another story.
I do not have a manual, but my youngest daughter who is only 2 years already realized that this was not a toaster or a helicopter. So if you really need a manual, I would recommend you personally to one of my psychologist friend, you will spend an IQ test with undisguised pleasure.

So for her it is simple this amp is when it leaves the store itself sucks. And I weigh but words. I've heard shit but at this point the engineers at Peavey had to do an internal competition to see who would be able to make its most dégelasse with the lamp.
Basically two sounds are used, ie using attenuated and using the input to the minimum gain. soon as one climbs it starts gerbouiller gently across the corners.
The idea of ​​a tone was good but here is the acute one goes it is loud and unpleasant.
The other option is to go into a normal entry and up the gain to max and then a saturated sound that could pass for a real lamp but worse, it happens when I finally even if you want to play first Clash or the Ramones, or energy seems more important than the shade.
Between the two is just crappy, and it is impossible to find a decent bluesy sound or a nice crunch.
Then one day I was bored I played Professor Frankenstein and started to remove the lamp cover by telling me that there was probably something to do.
So I start putting lamps that I had side and after a few tries more or less good I found the cocktail of death that kills.
I put a miniwatt EL 84 from behind the fagots (Dario), and especially I replaced the 12AX7 with a 12AU7 miniwatt home Dario also ...
And then a miracle Cinderella cast his rags and put on her prom dress. In fact this amp is simply not (what they say in PV for much gain. Was obtained in all the nuances of this game possible and everything is exploitable. It is true that a little less than volume, but hey it's not become a Walkman so far, but what a sound!
Moreover have it accepts pedals much better and with a good overdrive and it's downright divine, but with a good metal distortion (for fans), you get to take off squarely wallpaper the living room. Ditto for the Phaser or Chorus Type modulations.
So I would say that after the note pattern goes from very poor to excellent.

In summary if you want shit do not hesitate to buy it and leave the state. If you want to hand an amp that sounds vintage but usable at home without the constabulary comes to take a drink with you after 5 minutes debrouyez to find good replacement lamps, but especially the 12AX7 that goes this amp as a dress of Kate Moss on Schwartseneger.

It is possible that as we said a few others before me change the HP significantly improves the note too, but good change of a lamp is so simple that I see no reason to interfere.

Peavey ValveKing Royal 8
5
5 watt tube amp with gain controls and volume, so the output level is adjustable which convenient apartment.
Use single ultra gain + volume + tone.
2 inputs with different sensitivities (but balanced if they are connected simultaneously.
1 headphone handy when needed.
No HP bafle taken to an outside (but it is easily corrected).

I bought this combo for its lamps, its musicality, its ease of use and I have not been disappointed.
I play at home only with Stratocasters, clear sound and overdrive.
Blues, blues, rock and blues too.

There are a few months, I modified by removing the original HP 8 inches.
I cut the combo 2 and kept the upper part that I converted into amp head, and made a separate bafle in which I installed a Celestion 12 inch HP, and then there is the amazing metamorphosis.
All dressed in white leatherette, the HP is hidden behind a fabric foot black and white cocq. What class!

I was tempted by a Blues Junior or Excelsior, but they are more expensive for a very similar result.
Ideally I would have liked a more reverb and a bit more saturation, but with pedals, you get what you want easily and simply.
The initial investment was low, easy modification, pleasant and inexpensive, the result worth.
PS: if you are tempted by the adventure, contact me and I'll explain.

XaoG's review (This content has been automatically translated from French)

Easy to use good clear sound

I changed the HP for a Jensen 8 "Ceramic 25W C8R vintage.
For 35 € is what to do: the amp sounds now.
With a BB preamp is a well full-bluesy sustain.

It is handy for use in small and lightweight Repeat if you change the HP
Did you find this review helpful?yesno
»
Read the 12 user reviews on the Peavey ValveKing Royal 8 »