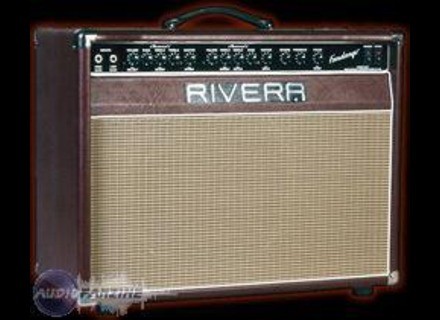 pitipierre78's review (This content has been automatically translated from French)

Rivera Fandango 112 combo
5
- All Tube Amp, 2xEL34 5x12AX7 in power and preamp.
- The power output is 55 watts through a Celestion G12T-75 HP.
- Hi and low gain inputs on the front, effects loop, footswitch, extra HP ...
- The settings you want in here ... 2 channels, Channel 1 is dedicated to the saturation. There are volume, bass, midle, treble, master. Channel 2, same as channel 1 but can activate a "bright" by pulling the treble knob and change the response of the medium, drawing on the button midlle.

There are also settings for starting levels and effects return. Among other strengths, we can see a boost on each channel assignable, an exceptional quality reverb springs 6 "Hammond Long Pan", specific settings for Focus and Presence control of dynamics and high frequency of HP (a kind of boost "heat"), a switch Vintage / Modern on the back (reduces power output by 50%), an effects loop in series with control level ...

A tip for first use, put all of 5! It's simple, efficient and beautiful, it sounds right away whether a bright or saturated.
From there, you play with the buttons whose accuracy is surgery to sculpt your sound:
the numbers on the buttons are not there to make up the numbers, when from 4 to 5 on any button is defined as a difference ... it changes my JCM 2000 ...
The manual? What manual? Well you have to go look for it on the website ... in English but not hard to decipher.
Gone, I put a new one because of the manual.

Sound level, while there, brace yourself, there's something for everyone and knows almost everything!

To sum up, this beast makes clear, typed crunch Fender, Vox and Mesa, to the more distal Marshall (70-80 years) without failure drooling but with a crunch distortion KT66 lamp type and finally with a disto very powerful rock and metal also typed Mesa and Soldano.

In short, a delight to all floors, a range of sounds I had never seen before.

I play it with a United States Split Stratocaster Eric Clapton, an ESP LTD M-1000 and an electro-acoustic Cort 740-FXNA. 3 The guitar sounds great on this amp and even EMG 81/89 active are not come to the end!

In the end, I've had four months and you'll understand it's a great amp that is unique to touch everything efficiently while having his character!

Compared to Rothelle is an amp that will delight fans of big dug saturations, raucous and modern, for the rest it is very similar but complementary to both.
The lover of vintage sounds and sounds more clear to fall will be delighted too.

Add to this package a great finish, because it should also be noted that manufacturing is entirely handmade. Everything is very well built!
For my part, I chose black which goes well with a grid woven with gold edging, which had its effect. It is class, nice ...

Although he appears to holy Nitouche lies a true racing machine where the attention to detail was sought.
If I had to choose again, I repeat one, obviously.

This is my fourth amp, I also tried a lot but I found the ultimate tool certe cheap but not stolen either.

By the way, thank you to Musytrock at Bonneval in the 28, the seller and owner Titi, from whom I tried half a day, him on drums! Super!

orwells57's review (This content has been automatically translated from French)

The switch modern / vintage is rear to tilt the lamp operation pentode or triode mode.
You can activate a "notch" which is equivalent to the bright high frequencies (useful for casseroles funky).
2 fuses on the back (a "hand" to 250V and a "HT" to 500V)

Then there attention it rocks! It is a 55W amp to forget right away for the game apart. This amp is designed for group play and after testing it on stage, I noticed that it is too powerful for small rooms.

Like all Rivera, Channel 1 is saturated and 2 on clean. In addition, the EQ knobs are reversed on both channels (the bass is on the left 1 and right on the 2) is a bit confusing at first.

It takes some time to adjust before finding her killer. But the first use by putting everything at 5 was already a good idea of ​​what the beast can give.
As stated in previous reviews the knobs are very sensitive, which leaves a good headlock hours before finding the ultimate sound. More knobs push / pull bright and notch changed radically rendering frequency channel clear.

2 small flaws: the reverb is foot switchable boost and especially the "Ninja" on Channel 2 is accompanied by a significant jump in volume.

The manual downloaded from the site Rivera is common with his "brother" the Quiana (in English). No type settings (it depends too much on the guitar is plugged), but a fairly comprehensive technical doc.

In a word: BEAUTIFUL!

Following cramage a lamp power during the 2nd rehearsal (aarrgghhh!!) Probably because of transportation, I replaced the 2 EL34 power + the first 3 lights preamp. The sound is thereby changed, especially on clean that extra shine.

This amp is extremely versatile. In addition to my PRS I tried it with several guitars (Telecaster, Strato, an old Epiphone Hollow Body) and the color of the instruments is really respected (I might even say transcendent).

Channel 2 (clean) and is less brilliant than slamming on a Fender Hot Rod style, even after changing lamps. It has a round and warm ideal for jazz and blues. The "ninja" is terrific boost for solos blues once you have mastered the jump in volume and in rhythm I have not yet managed to find what suits me. Cons by the OD or distortion pedals to go nickel on this channel.

But it is on channel 1 (full) we will take the slap. Unlike Quiana rather dedicated to blues, the Fandango has a pure heart of rock and even metal! Whether in the Angus Young crunch, to extreme saturation (Mick Thomson of Slipknot performs on a KR7 Rivera), the amp delivers huge bass while keeping the heat in the midrange frequencies (ideal for solos). More grain is always tight, it remains clean even with the gain at the bottom (watch out for errors of play!).

I've since March 2009 and I will take time before we can give a truly objective opinion, as the range of settings is large and the possibilities of this amp are great. Its main drawback is its power that provides high volume even mini. It can cause problems when playing in small venues (the port of protections repeats is strongly recommended).

Very versatile, each with a sound that rips, we are in the high end and it shows. Although Rivera sells his amps as being the Fender clean and a drive to Marshall, I find that in one case as in the other a ring before Rivera as a Rivera ...!

Considering the price I would advise prospective purchasers of this jewel to think about changing the first 3 lights preamp, it's really worth it for 60 € more.
€ 1500 secondhand with the fly, it's still expensive. The purchase of this amp must be well thought out investment. This is pure mass murder which I think I can separate the later. It is suitable for all styles possible (with a predilection for the Rock and the Hard Rock).

I play mostly stoner rock band and do it again if I would have probably chosen a cheaper amp and less powerful (like the Bogner Alchemist 112, not out yet when I bought the Fandango).