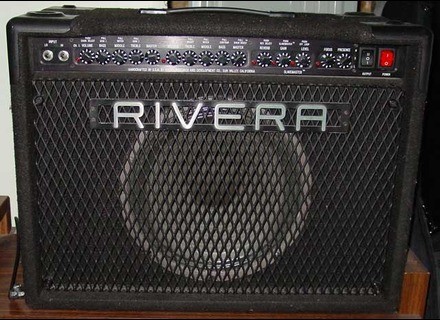 doha1696's review (This content has been automatically translated from French)

At first glance, it's a classic combo fairly easy to use ... In fact, the adjustment possibilities are so vast that it is sometimes a bit difficult to navigate. In fact, turn a knob to 2 millimeters is often enough to change the sound quite dramatically (like all Rivera). More knobs influence them. Example: add mediums can sometimes increase or boost the récproquement. In short, the possibilities are enormous and endless, and perhaps a little is the lack of qualities ... I spent several "days" to get the sound I wanted through a lot of interesting combinations for intermediate ... That said, it was well worth it because now I actually sound I wanted for years. Little aside, I use the Rivera with a Fender Hot Rod in stereo but it is the Rivera who leads the dance as it is from its prémapli I get the desired result. Added to that a TC G Major (fairly criticized by many but which must also take a moment to draw the quintessence ...) and also a small Xotic BB preamp pedal (for a cream ...)+ Vigier exca Custom Peavey Wolfgang EVH and a signature.
I was lucky to find this amp used from a former owner who had carefully kept all the doc. The manual is in English but obviously it does not ask me bp and there is a particular book describing typical settings quite interesting even if it is obviously necessary to adapt them to their next choice.

In terms of sound, of course it's complicated because I really believe that we can really provide all get there with this toy. Personally I particularly like the sound saturated with gentlemen like Steve Lukather and Andy Timmons, Vai or Satriani or ... I get them all and I add my own personal touch with a 'midrange tite edge thereby ch'ti coat or outline here. And with the BB preamp, all with sublime is the little thing that just missed ... In short, I had a lot of different stuff, Marshall's three body through the pedal modeling certainly handy but unconvincing in terms of sound itself ... A JMP or even a Triaxis Boogie. I can not find anything worth my current config. The sound is full, round, colorful, and above all, the "mine"! I do not play much in the clear but the sound is so clear of Rivera top it gives me ideas ... In short this amp is "magic" ...

As I said this is really the top if we accept to spend the hours it takes to get the max! Shame it is not programmable and controllable by noon because there is near perfection. I actually a little difficult to understand that with such variants amp sound is not "designed" for that. I do not see in concert back sounds by placing the pots in the right place, especially a human hair is enough to change the color of his ... Mr. Rivera, please, Give Us preamp at noon ...
Remember that to ring the beast, you must still play at the correct level. In other words, it is better to forget this kind of gear in apartment may be very disappointed or ... to find the neighbor with the revolver to his head!
Its "skin" class is rather beige and it found a limited edition anniversary today ... In nine the prices are quite daunting but ultimately it's true no more than a Boogie (and it's still autrechose ...).
As for the choice, I would do the same course and I even think that eventually, I will try to find a second Rivera to replace my Hot Rod! Do not hesitate if your heart balance, the small Chubster is already an excellent choice (Rivera is the first I had the opportunity to try ...) it's not for nothing that the great Steve has maintained its current range!
Last not least, let's not forget the guitars that I have it connected that are not shovels three times (I even have "rediscovered" my Vigier through this amp) this may possibly expliqer this!