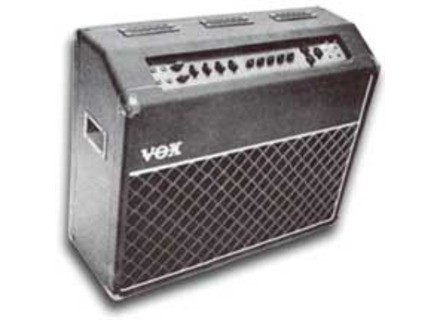 Vox AC120 Twin Reverb 212
5
Having heard that this amp was similar to the Fender Twin, I figured I'd check it out. I'm a big fan of the Vox AC30 and wanted to see how this compared. This is a tube amplifier. It has two channels, which each have two inputs. For each channel there is a knob for volume, bass, treble, middle, and presence, as well as a 5-band equalizer. There is also a knob for distortion on each channel as well as reverb and master volume.

This actually isn't too hard to use, and does in fact function much like a Fender Twin. The distortion knob actually changes the tone a decent amount and gives you a greater amount of subtlety. The amp isn't great for adjusting on the fly, it's better to pretty much set it and go, though if you are the only one plugging in, putting it on standby and changing channels can be useful for developing different sounds, or if you are using different guitars.

I think that this sounds great with just about any guitar. I like it because it is similar to the Fender Twin. Though I'm not sure I would use it over that one, I'd be just as quick to use it if it was the only option. Basically, imagine a great tube sound, but with the ability to control distortion a little bit more efficiently. That actually comes in handy when playing some of the raw styles of rock, if you aren't trying to use pedals and just want to plug and play. The most you can hope to get out of it is a light crunch, too much distortion and the sound starts to get irritating. The reverb is classic spring, always good for live situations if you need it.

I like the overall tone of the amp the best, and especially liked the distortion knob for adjusting the tone better. I don't think these are easy to find nowadays, but if you can, you should pick it up, they are going to be really expensive soon. I wish Vox would reissue these, mainly because they are really cool and would go really well today for people who like tubes but need a little bit more grit.