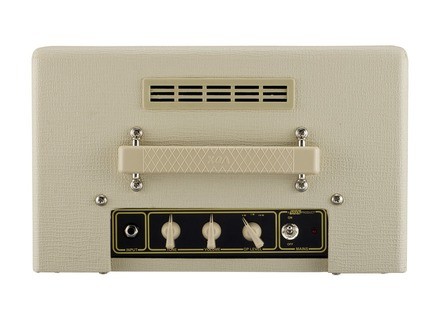 Vox AC4TV
4
This is the 4 watt tiny tube combo by Vox. It was built to sound similar to a Vox AC30 or AC15, but on a budget as well as so you can get the tone of a cranked, over driven tube amp without blowing your ears out.

It is an attractive blonde cabinet with controls facing up similar to the standard Vox amps as well as the iconic brown striped grill cloth.

I was in my local music shop testing out guitars and saw the Vox. Everyone is making a small tube amp these days, so I had to see what Vox had to offer.

An EQ and Vox would be able to charge a couple extra dollars. But hey this amp brings you back to the old days, Volume and Tone.

You can tell it's a budget amp. This isn't a bad thing, I just don't see they amps hanging around or taking much abuse. But, hey if you want a fun practice amp, or an extra tone in the studio, this is a cool amp.

Bottom line is this is a fun amp. It is sleightly above gimmick and novelty. It will get you in the ballpark of a AC15, just I wouldn't drop everything and go wait in line for one. If you need the Vox tone on a budget or want a low maintenance first tube amp, this is for you.

Vox AC4TV
4
The Vox AC4TV is an extremely small guitar combination amplifier, designed for practicing and possible recording. It is a tube based amp, which is rare for such a small amp, as it has both a 12AX7 and EL84 tubes,and has a single 10 inch speaker. It only delivers four watts of power and has a single 1/4" input for your guitar.

Using the Vox AC4TV is incredibly simple, as there isn't much to work with in terms of parameters. This isn't surprising, as most small amps like this don't. It simply has knobs for tone and volume, as well as one for selecting what amount of wattage you would like to use. It has four watts, one watt, and a 1/4 of a watt to choose from in terms of settings. This is a nice feature as it allows complete control over your output. A manual certainly isn't necessary, but I haven't seen one so I don't know anything about it.

The Vox AC4TV definitely has one of the better sounds when it comes to amps of this size, especially considering that this amp only outputs four watts at most! I've used the amp for practicing and messing around with a Fender Stratocaster and no pedals or effects. While of course not comparable to something like an AC30, you can definitely hear the classic Vox sound even in this tiny amp. I don't think that I'd recommend it for anything other than practicing as it just can't get loud enough, although there could definitely be some creative and cool things done with in the recording studio. Having said this, I haven't tried it out myself for recording, so I don't want to speak about it any further - all I will say is that I wouldn't rule it out.

The downside to the Vox AC4TV is that even though it is small and only four watts, it still has a decently sized price tag. You'd think and like for it to be a bit cheaper than this, as there are bigger amps with a bigger sound available for this price. So while the AC4TV is a cool little amp, I'd recommend looking elsewhere if you're in the market for a practice amp, as you can definitely get something with more power and options for this the price you'd have to pay for one of these.

jertio's review (This content has been automatically translated from French)" Without more ..."

The sound is a bit "narrow" over my Pathfinder 15r. Much less space for clean sounds, but warmer and Introduced for crunch sounds.

It sounds good but not great. In addition there was an unpleasant snoring.
Dshabill at my rparateur technician and it turned out that the low-end electronics is the cause. Not a failure but a structural default so.
I sent back and made myself remboursbr />

J'conomise for an amp lamp used by components in terms of what we can expect from this kind of amp.
Better a good transistor amp amplifier means a lamp.
I play a little every style, and in this context the Pathfinder is better as more versatile.
Did you find this review helpful?yesno
»

It is a single-channel with gain rglage + volume and a 10-inch HP quality so not much wrong in this CATEGORY.

In fact the gain is called "volume" and volume "OP Level" but they work well conversely: for a clear gain in mini, 4W volume for a gain distortion at max volume 1 / 4W. .. the house, and yet it is limited, and frankly not advisable in the apartment. The very bottom, it is possible in a group we played the "kindly"
Everything is done ear: you choose your level of saturation between a clear crmeux (not clear) and a stamp well rpeux ZZ Top. In all cases the sound is immediately good.

East blues rock, it saturates very quickly, aussitt humbuckers with my lag roxanne (air norton / air zone). 1 / 4W sound is frankly s'claircit compress it and becomes the top 4W attention to the ears, has already sent a lot!
Point sonorits stiff, straight or modern here. Vintage veil covers the heat lamps that whirring sounds like a Harley: it is very very typ.
You play must live with it.

Play on any lamp is when even top, especially for the distortion. (I had a transistor H & K edition blue) But the house is something else, it sounds really good ( even very good) that 4 W. This sound has forcment enchant you one day, so many groups have played on VOX. But you do have one, it is not at all versatile (compared my H & K 25th anniv.) And did not aim too my pedal Boss OD-3: l I 'So have resold to play more varied.
Did you find this review helpful?yesno
»
Read the 32 user reviews on the Vox AC4TV »