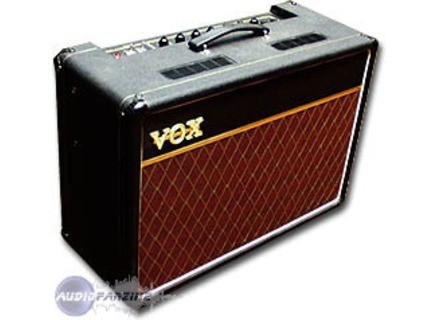 Vox AC15 TBX
5
Vox has made a tone of AC15 reissues and redo's and what have you. People have their opinions about which ones are better. These days the common consensus is that the chinese ones are trash and the hand wired series are some of the best ever. I have played both and can say that both those statements are a bit of a stretch. Although the hand wired are very good. Most people forget about these TBX amps though, which in my opinions are some of the best AC15's VOX has produced.

The control layout is very close to the original, unlike some of the newer ones which have Vox's "improved" controls which are honestly pretty bad. This one is simplified which is the way an AC15 should be. Anybody who knows these amps will tell you that less is more and that the fancy updated controls Vox is giving them are a waste. These were made in the Marshall factory in England, which should be an indicator of the quality. They definitely aren't chinese. Mine came with an alnico blue, which in my opinion should be mandatory for these amps.

With the simple controls it's easy to get a good sound. You don't really need a manual. Just turn the knobs till it sounds good.

This is my workhorse gigging amp because it has never failed me yet. All I need is this and a pedal board with a couple overdrives and a delay and I'm good. I can cover pop to rock with it. It sounds golden. I've heard these marshall made ones are hard to service but I wouldn't know because it hasn't given me trouble. I have used to high end Vox handwired series and this is right up there. It evens gives my Morgan a run for its money. A lot of guys don't know about these or seem to think they need an AC30. But 15 watts through an alnico blue is a lot louder than you would think. Some people like this amp with a greenback for more dirty sounds. I get that. If you want that chimey vox sparkle this amp will get you there. Period.

These kill the chinese AC15's that are being made now. It's not even close. I have a hand wired AC30 and it's roughly on par with that. The hand wired are might nice and I think if you want the best possible vox tone, you might wanna shell out the change. But for the price this TBX is the bees knees. I want to get another just because of how great the value is.

Vox AC15 TBX
5
Much like its older and more sophisticated brother the Vox Ac30 the Ac15TBX packs a nice punch as well. The Vox AC15TBX has a fantastic tone similar to the Ac30 but with only one speaker. You will have all the great features and tone, but it will come in a much smaller compact size.

I think of the Vox Ac15TBX as a little practice amp that can do all the same tricks the Vox AC30 can do. I don't find the AC30 to be very difficult to carry around so this wouldn't be a reason that I would ever buy an AC15. I wouldn't need to lighten my load, but I find that Ac15 is a more suitable backup amp or recording amp. Since many studio have limited room I think the Ac15TBX would accompany that type of situation quite well. This is just my personal opinion and doesn't reflect anything from Vox. I just think the Ac30 is the perfect pop and mild rock amp in the world and cutting the speaker and output in half is kind of pointless.


The Vox Ac15TBX is a smaller but equally tonal bliss as the AC30. The operation is the same as the top boost Ac30. You basically just have half the wattage and one less speaker. The amp still sounds better with an alnico blue or silver speaker. The greenback while a great speaker doesn't compliment the tone of the Vox amps as well as the alnicos. The cut knob on these amps are very interesting an if you aren't used to them they do take some figuring out.

The Vox AC15TBX sounds just as good as the Ac30. The benefits you have is cranking the thing up to get distortion is a little easier since it is half the wattage. It is smaller and portable which fits nicely in small spaces.


I'm more of an Ac30 guy so I would never buy an Ac15. The quality and features are all the same. You just get a smaller cabinet and one less speaker. Well you get two less power tubes as well

I would recommend this amp to anyone who needs a smaller version of the Vox Ac30. Vox unfortunately do not make the AC15 TBX anymore. You will have to locate one on the used market. I have seen them occasionally on the classifieds and on evilbay from time to time.