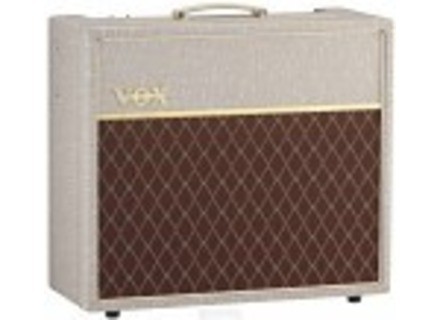 Vox AC15HW1
4
This is the way God intended Vox's to sound like. Let's cut through all the garbage that Vox has put out in different variations and added letters on the model number to get more sale. I understand the sales part of it, but I am talking about tone and purity. I think there has been a loss of integrity on Vox's part with shipping their operation towards China and selling the same amps for the same price. It just makes me sick! Not actually sure if this handwired amp is made there but it would greatly disappoint me if it were true.

This is a great tone for a great sounding amplifier. The hand wired version basically putts every thing as far as components and wired via a turret board which makes it easier to fix but also makes things harder to break.

This is the classic Vox Ac15 tone that you heard on many recordings from the 60's and 70's. The familiar British grind that is so familiar to the tone of Brian May and other is achievable from this amp. It is going to be a little bit more compressed and spongier than an AC30 but definitely have the same character.

At new these amps come in at around $1500, which is not bad for a new hand wired amp. I know that when Vox started these hard wired series amps a few years back they were almost double the price. This a little bit more reasonable, but makes me wonder where they are built.

If you are in the market for a great sounding amplifier that is hand wired and compacted this might be the one for you. I recommend every person who plays guitar to at least try this amp. If you are getting ready to record than this is an amp you will almost definitely need.

lemurien.des.villes's review (This content has been automatically translated from French)

Vox AC15HW1
5
All-tube amp, including grinder, wired PTP.
15W, no effects, 2ch, 4 inputs: Normal low / high and Top Boost low / high, possibility of bridging the two channels.
Celestion G12M Greenback hp
Interesting point switchable master.
For the rest, see full specifications on the Vox site:
http://www.voxamps.com/uk/handwired/ac15hwac30hw/
Note: after purchase I started to change all the lights, especially the V1 preamp where I put a 12AY7. The amp saturates a little less but suddenly is exploitable even background. With original lamps, beyond three quarters, it became too rough.

Simple configuration, there are not 50 settings, and it is just fine.
On the normal channel, a gain knob, a switch shine.
On the Top Boost channel, gain, bass, treble, switch hot / cool
And finally, master (if activated) and tone cut
I mainly use the normal channel, master bypass, so two knobs to adjust: volume and tone cut ... Difficult to do less, and at the same time, that's enough.

I play rock eyeing Dead Weather. Perfect for that. I'm not looking for his clear, on the contrary, rather good crunch. On the normal channel, pushed three quarters was a fat sound, quite compressed but still allows good grades gaffe by his attacks picks (possibly also playing on the flight. The guitar).
I use some effects: big muff, overdrive, POG, micro synth, and some others, nothing wrong, everything goes fine.
When I bought it I did a A / B comparison with my old amp, a AC30CC2 (HP Wharfedale therefore equipped): This is the day and night, especially at the bottom. On serious AC15 are round, well defined, and when it starts the POG remains accurate. The AC30 side had low cardboard. The greenback thank you, I think it mainly comes from there.
To the Top Boost channel, I do not speak, I do not use hardly ever preferring to sound normal channel.
The only complaint we could make the normal channel is sometimes a slight acute shortage - the relamping allowed me to open up a little more sound anyway - that would break a little more mix (our config is pretty loaded with bass, keyboards, drum machine, drums ...). The switch "brightness" can help, but it is almost too much. So I sometimes added in parallel a Class 5 marshall pushed to the max, only for acute and with a good reverb behind, and the combination of the two works perfectly: the vox makes a good base sound, the marshall aid drill a little deeper and gives a really dirty side to the whole. After this config request we can play with some volume ...
For most concerts, I only use the AC15 and the master reveals its usefulness to cruncher amp at low volumes.

It's been a year that have, in lieu of a AC30CC2 (which I found a bit too powerful in the end), and the gain in quality is there. In defects, we can note some vibrations at high volume, but nothing really annoying.
Q / P ratio is excellent, and yes, I do it again this choice without hesitation.